This is the end of the comic review segment as Part 4 is my opinion piece. Still comic book related, but not related to a specific book. These four books were all impressive and very enjoyable. We have one major league book, one book going on hiatus, one ending and one smaller book that is just an excellent read. 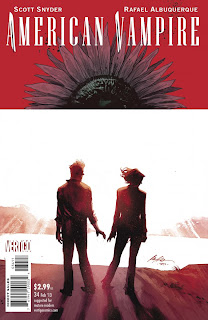 The book going on hiatus is American Vampire; issue #34 is the last issue for awhile as Scott Snyder (writer) and Rafael Albuquerque take a breather, get caught up and prepare for what Scott says is the final half of American Vampire. I’m guessing the break will be about six months or so. I wish more stories had the ability to take a hiatus. The monthly grind can be just that and I think the hiatus is a positive. I was surprised to read that the next half of the book is the final part of the series. Still that is around three more years of American Vampire and I believe most stories are stronger by having a beginning, middle and an end. Of course there is no reason why there can’t be some follow up series down the road unless Scott ends it with blowing up the world. I liked how we had this chapter that served almost as a teaser for what is to come. American Vampire has been everything you could ask for out of a great story, compelling characters, action, adventure, romance, horror and moments of hope. Rafael has grown as an artist and the marriage of words and pictures has been absolutely seamless. Scott knows when to let the art carry the story and when to add in script to move the plot forward. I care about Pearl and loath Skinner Sweet as though they were people who I know personally. This is a great series, a seminal series that will define both Scott and Rafael and mark them as top notch creators. If you are not reading this series you are missing out and should buy the trades or hard cover collections and catch up and be ready when it comes back. 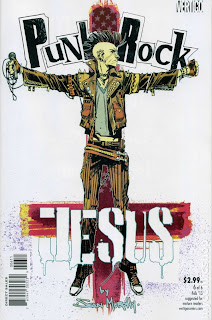 The series that ended is Punk Rock Jesus by Sean Murphy. Six glorious issues that were theoretically about a cloned Jesus Christ, but ultimately was about a man named Thomas McKael. It surprised me because I knew Thomas was important, but I never got the point that the entire story was about Thomas more then anyone else until the last issue. Thomas is a man who struggled mightily with issues of his own faith in God, in man, in his mission and in his father. Thomas was raised to believe he caused the death of his father and that the IRA was his mission in life. In this issue we found out that Thomas quit the IRA since he found out his Uncle had duped him and was actually the man who killed his father. That is part of the back story for Thomas who believes he has been visited by Angels and told never to kill again. This makes his desire to try and protect Chris (Punk Rock Jesus) a tough job and one he fails at. Faith, reverence, destiny and service to God or a person all mixed together with feelings about religion and how the world works. Sean Murphy packs a lot of story into a few pages. This will go down as one of those series that people should continue to be talked about and may be a perennial seller for many years. 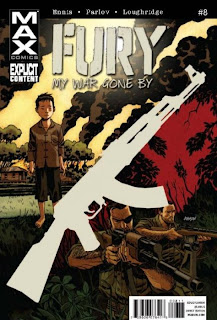 The smaller book is Max Fury #8 by Garth Ennis and Gorlan Parlov. I don’t think Marvel markets this book at all and I have no clue if it is a mini-series or an unlimited series and I don’t care. This is Ennis at his best talking about war and politics and using characters that are as hard bitten and edgier as any you could ever imagine. If Nick Fury and Frank Castle were real people this is who they would be. Ennis is capturing the moment in time of US history and our involvement in the Viet Nam war. He is exposing all the ugliness and bullsh*t that went on at that time. It is a great lesson in history and one that we as a country have not really learned from as the quagmires of Iraq and Afghanistan are going to exposed as just as bad as what happened in Viet Nam. The difference is we are killing less of our own people and the patriotic fervor is at an all time high due to September 11. Ennis has a way with war material and these characters that make this series feel real. It is a well written book with good art and telling a story about . 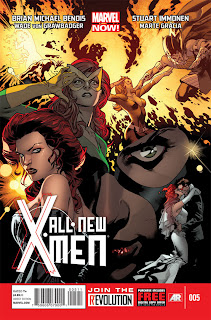 Last and far from least is All New X-Men #5 by Brian Bendis, Stuart Immonen and Wade Von Grawbadger. Where Bendis dialogue in Avengers was lame, it reads great here, where Bendis sometimes seems to just use characters in Avengers, here they feel right. I have not enjoyed an X-Men book like this in a very long time. Heck I know the big flaw is the story is slow building but the accelerated publishing schedule resolves that problem. If the same story had taken 4 months to get to this point the pace would be grindingly slow. I would be typing, why is everyone excited about this book, nothing happens. Brian has even resolved the time travel issue by stating that when the original X-Men get sent back Professor X will mind wipe the whole thing. Of course when Professor X reads Scott mind and finds out he kills him, maybe he will have second thoughts. Or better yet set up something so it only appears he is killed. Of course the Red Skull has his brain now and that hurts that idea. Anyway the comic is fun; the story is nice as we get to see the X-Men before the baggage meet themselves with history taking its toll. Now the premise is set as they will not go back until they try and fix what is wrong and Kitty will be their leader to help them deal with today. With this book I’m too the point of almost using the old cliché of asking for someone to pinch me as I must be dreaming to enjoy an X-book this much again. Again a big thanks to whoever pushed the fast publishing schedule otherwise this book would not be any fun at all, it will be an “are we there yet” book.