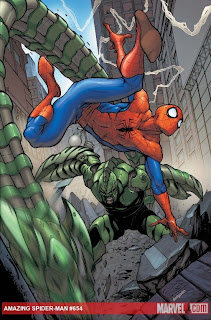 Spidey saved the week…Really. I had gotten a HUGE (huge for me anyway) stack of comics this week and I was very anxious to read several books right away. I must have plowed through four of them Wednesday night and they all seemed to disappoint in some way:

SpongeBob – Not very funny (waiting for the kids review);

Flash – made me realize how frustrating people get with Barry Allen all the time, because this issue was S…L…O…W. Plus, the big reveal at the end left me colder than Leonard Snart;

Next Men – Well, if you read the issue you can probably guess, which scenes I didn’t like. I also thought it was a mistake to make the reader a distant observer of the three time-lost characters – took me out of the story;

Of course, after attending two two-hour meetings that day, I was bleary-eyed by the time I was reading these, so that may have contributed to my overall malaise.

However, Thursday night was totally different and I really, really enjoyed ASM #654. Even though some of the impact was lost on me, because I had inadvertently flipped to the back of the book to look at the Venom backup and saw Jonah holding Marla in his arms.

I thought it was a nice twist that Peter’s boss, didn’t really think he was Spider-Man, only that he was helping Spidey with his “Tech”. It’s a reasonable conclusion to make for a super-genius and it keeps the secret ID tensions going a little longer. Plus, it gives Peter even more flexibility.

I generally don’t like to see long-standing characters killed off, but it was nice to see Marla in action developing her own defense against the Spider-Slayers, especially since that’s how she started out back in the day, which I had forgotten about. Even knowing how it was going to end, I still thought her death was more emotional than the Human Torch’s. Jonah has the potential to really grow as a character from this tragedy.

I didn’t expect Smythe to be able to come back so quickly from Peter’s Bioelectric Magnetic Pulse, which was really cool by the way. Peter has had people bypass his spider-sense in the past, but I don’t know if it’s ever been turned off like this before. Seeing how he adjusts should make for some interesting stories,

I still don’t like the Phil Urich/Hobgoblin plot, but I think Shawn is on to something about him being an anti-Peter. Really the only thing about this series since the start of BIG TIME, which really “bugs” me (not counting MJ honing in on his new girlfriend relationship) is the frequency of the title! I mean it comes out almost weekly! I thought they were slowing down the publishing some, but it’s got to be a large drain on my budget! 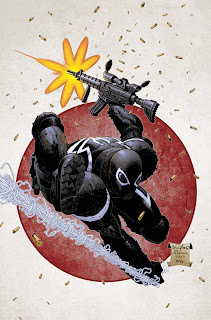 Now, the backup with Venom was really terrific too. I totally dug Flash Thompson being the new host for the symbiote. It has a whole Six Million Dollar Man vibe to it, having the alien replace his missing legs, and since I’m currently watching Season Two of that classic show, I’m automatically predisposed toward the concept. It also makes sense that they would use someone who loves Spider-Man to help counteract the hatred the symbiote has for Spidey. The sequence where Flash wonders why he can’t be called “Spider-man” was very funny. “There’re two Hulks, Two Caps, Why can’t there be two…” The fact that this is a limited and possibly fatal assignment has great potential. Will he be bonded to the symbiote or addicted to having the extra abilities? How will it affect his relationship with Betty? Will it make it even harder for him to go back to being disabled? Plus, they have a natural out for switching hosts down the road. For something that was totally not on my radar, I’m very interested in checking out his series now.

GRADE A: I’m enjoying mainstream Spider-man again. I didn’t think that would ever happen. Nuff Said.
Posted by Matthew at Saturday, February 12, 2011