Continued from Monday, but still no boob covers, more of a punks, attitude, and zombies kinda day...

Boom! Studios
Zombie Tales Omnibus SC by (W/A) Various A who's who of great storytellers populate this volume that collects the bestselling Zombie Tales volumes 1 and 2 into one gigantic 224-page package! Featuring heavyweights Mark Waid, Keith Giffen, Steve Niles, William Mesner-Loebs, Karl Kesel, Brian Augustyn, Michael Alan Nelson, Joe R. Lansdale, screenwriters Chris Morgan (Wanted), John Rogers (Leverage), Andrew Cosby (Eureka), Johanna Stokes (Eureka), Christine Boylan (Leverage), and Academy Award-Nominee Kim Krizan (Before Sunrise) with a murderer's row of artists: Fabio Moon, Eduardo Barreto, Lee Moder, Tom Fowler, Ron Lim, Minck Oosterveer, Andy Kuhn, J.K. Woodward, Carlos Magno, Mark Badger, and Gabriel Hardman! $19.99
Lee: And Boom gets into the Omnibus market. I like the idea but it’s getting to point of tpb saturation. This is a giant collection of short stories that I remember being pretty good. It has a great group of artists and writers so this is a pretty safe bet.
Gwen: You can (apparently) never have enough zombies. This should actually be a really cool collection as these were decent stories and a good variety of talent from what I recall.

Drawn & Quarterly
Reunion SC by (W/A/C) Pascal Girard
In the summer of 2009, Pascal Girard received an invitation to attend his ten-year high-school reunion. Initially dismissing the idea of attending, he quickly changes his mind when he receives an e-mail from Lucie Coté, the girl he had a huge crush on in high school, who wonders if he would like to accompany her. Pascal becomes flustered with joy, but he must keep his uncontrollable infatuation a secret from his girlfriend, Julie, and he must do something about his weight. He takes up jogging every day until he reaches his goal of shedding fifty pounds. The now-slender Pascal arrives at the big event, full of fervent anticipation, but his fantasies become cruelly deflated with each conversation he has with his former classmates. 152 pgs. $19.95
Lee: I didn’t make it back to my 10 yr reunion so I can only imagine what it must have been like. But, this sounds like it could be an excellent example of what I might have encountered. This really does sound too good to pass up.
Gwen: I don't think my graduating class had a 10 year reunion - or if we did they didn't contact me about it. The media has scared me off of high school reunions, they sound like a terrible idea. 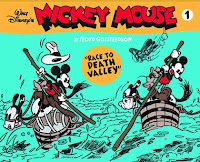 Fantagraphics Books
Death Valley HC by (W/A/C) Floyd Gottfredson
Today everyone knows Mickey Mouse as Disney's cheerful ambassador. But back in the 1930s, Mickey gained fame as a rough-and-tumble, two-fisted epic hero! And Mickey's greatest feats of derring-do were written and drawn by one of the greatest cartoonists of the 20th century - Floyd Gottfredson. The premiere volume, Walt Disney's Mickey Mouse Vol. 1: Race to Death Valley features a dozen different adventures starring Mickey, his gal Minnie and her uncle Mortimer (not to be confused with Mickey's rival in the animates shorts!), his pals Horace Horsecollar and Butch, the villainous Pegleg Pete, and the mysterious and shrouded Fox. Relive Mickey's race to a gold mine with Pegleg Pete hot on his heels; Mickey's life on the lam after being framed for bank robbery; even Mickey's ringside battle with a hulking heavyweight champ! Now it's time to rediscover the wild, unforgettable personality behind the icon: Floyd Gottfredson's Mickey Mouse. 260 pgs. $29.99
Lee: This is sooooo good that I’ve already ordered my copy. Forget everything you have ever seen in Mickey Mouse cartoons, this is the original Indiana Jones version of the mouse. These are excellent stories that have great art and are still highly entertaining to this day.
Gwen: I have a feeling this is being put out now because of the success of the Epic Mickey video game for the Wii. Which is a pretty cool game but before it came out I don't think many people thought of Mickey Mouse as an adventure hero.

Isle of 100000 Graves HC by (W) Fabien Vehlmann (A/C) Jason
Five years ago, little Gwenny's father found, a map inside a bottle with instructions on how to reach the mysterious (and titular) Isle of 100,000 Graves and its legendary treasures - and then he vanished. Now Gwenny, having stumbled across another bottle-shipped map, enlists the dubious help of a shipful of pirates and sets out to find the island and her long-lost dad. Little does she realize that the Isle comes by its ominous name honestly, as the location of a secret school for executioners and torturers, where apple-cheeked youngsters are taught the finer points of extracting information from prisoners... and then putting an end to their lives in a wide variety of gruesome ways. And they've reached the point in their studies where theory should ideally give way to practice, so an influx of uninvited visitors comes as a blessing to the faculty. This story is a comedy, albeit a dark one. 56 pgs. $14.99
Lee: This has two things going for it: (1) I love Jasons art, & (2) Vehlmann’s a good writer. Never hurts to have the deck stacked in your favour! This just looks like a ton of fun.
Gwen: Pirate minions - I've always wanted pirate minions of my own. 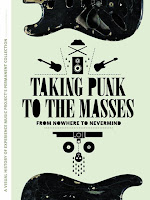 Taking Punk to Masses SC by (W) Jacob McMurray
Taking Punk to the Masses: From Nowhere to Nevermind and Beyond serves as a companion and contextual backdrop to the Nirvana: Taking Punk to the Masses exhibition, which opens at Seattle's Experience Music Project (EMP) in 2011. It visually traces Grunge, the Seattle Sound, from the punk subculture of the late 70s through the heady 1990s when bands such as Nirvana rose to the national stage. This decade-and-a-half musical journey will be represented by 100 key objects from EMP's object collection - instruments, costumes, posters, records, and other ephemera - that are put into context by the stories of those who lived it, culled from EMP's vast archive of oral histories with such Northwest icons as Nirvana's Krist Novoselic and many more. The exhibition Nirvana: Taking Punk to the Masses includes footage from over 100 interviews: selections are included in a DVD exclusive to the Taking Punk to the Masses book. NOTE: Item ships with DVD insert. 248 pgs. $29.99
Lee: I’m a huge music fan and one of the genre I love is Punk! I can’t miss this opportunity see how it went from the underground greats (Ban Brains!) to the very socially acceptable (Green Day!?). I’m sure this will be very entertaining.
Gwen: While I've enjoyed some punk music in my time I've never been all that interested in reading about music. Not that the world music class I took in college wasn't cool, but I have a short attention span for music history - I'd rather just listen to music. 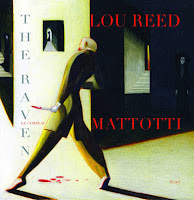 The Raven HC by (W) Lou Reed (A/C) Lorenzo Mattotti
In 2001 legendary rock n roller Lou Reed immersed himself in the world of one of his spiritual forefathers, Edgar Allan Poe, to produce one of his most challenging and original works: POEtry, a cycle of songs directed by the legendary theater director Robert Wilson, in which Reed's poetically streetwise sensibility merged with Poe's dark chronicles of terror and despair - combining Poe's prose and work set to music, Reed songs inspired by Poe, and even two classic Reed tunes whose insertion into this context gave them a new resonance. This spectacular volume adds a third dark, unique vision to the mix: The brilliant Italian cartoonist and illustrator Lorenzo Mattotti (Raw Magazine, The New Yorker), whose vivid, abstracted and enigmatic paintings perfectly complement Reed and Poe's haunting words. 188 pgs. $22.99
Lee: Fantagraphics is really pumping out the Mattotti material these days and I love all of it! Mattotti’s art is too good to be missed. Combine it with classic material from Poe and this is too good to be missed.
Gwen: A little to esoteric for me and as far as comic books and Poe are concerned the Edgar Allen Poo books were good enough for me.

Last Gasp
Cynic's Guide to a Rich Full Life HC by (W) Mario Digiorgio
Learn how to be a more self-centered, cynical, and sardonic person as Austin-based stand-up comic Mario Digiorgio presents A Cynic's Guide to a Rich and Full Life, full of tongue-in-cheek advice on how to be an hilariously inappropriate person. So we urge you, hesitant reader, to plant your tongue firmly in cheek and prepare to learn the secrets of living a truly rich and full life. "Dance like nobody's watching. Then apologize to those who were.” "Tape record your mother's laughter. Play it at your father's funeral.” "Be big enough to admit your mistakes. Then take them all out for happy meals.” "To battle the blues, try exercising. Still down? Try cutting yourself.” "Every year, send out a dozen Christmas cards. All addressed to your Jewish neighbor.” "Ignorance may be bliss, but it's also expensive. You poor, happy idiot.” "If something seems too good to be true, it probably is. Check for an Adam's apple.” "Find someone who can always be trusted. Then find a unicorn that farts rainbows.” "Start a standing ovation at a grade-school play. Stand and boo.” "Learn a new card trick! Then show it to your dog. Seriously, no one else cares.” "Obey all ten commandments. Nerd.” This expanded edition boasts of 40 extra pages of delightful wrongness. 160 pgs. $11.95
Lee: This should come as no surprise but this sounds really funny! Total irreverence is always good. Actually, I can think of a number of people this will appeal too… Thomm?
Gwen: Yeah... I'll pass on this, thanks.

Lerner Publishing Group
My Boyfriend Is a Monster Vol. 01: I Love Him to Pieces GN by (W) Evonne Tsang (A/C) Janina Gorrissen
Funny, quirky and fast-paced, the My Boyfriend is a Monster series of teen romances mixes horror with romance-proving that, sometimes, boys really can be monsters! In I Love Him To Pieces, can love survive the zombie apocalypse? Maybe Dicey's first chance at a real relationship was dead from the start. Her idea of a study session includes sleeping in the sun, and his idea of a good game involves dungeons and dice. But opposites start attracting when they're assigned to be partners in a class project. Now an outbreak of a weird infectio - it eats your brains and leaves you hungry for more - might not mean just the end of their first date. It might mean the end of everything! 128 pgs. $9.95 See Gorrissen’s comics here.
Lee: For all the talk of girls not liking comics, yadda yadda, there certainly is a lot of material aimed at them. I think it’s a great idea, and this is perfect if those of you that have tweens.
Gwen: This is hilarious. I love this idea and really want this book.

Nal
Ayn Rand Anthem Graphic Novel SC by (W) Ayn Rand; Charles Santino (A/C) Joe Staton
The controversial classic work of one individual's will versus the subjugation of society is now available as a compelling graphic novel. In all that was left of humanity there was only one man who dared to think, seek, and love. He, Equality 7-2521, would place his life in jeopardy. For his knowledge was regarded as a treacherous blasphemy. He had rediscovered the lost and holy word - I. 144 pgs. $15.00.
Lee: One day, I had the luck of being cc’ed on a long discussion between Jim, Greg, and Thomm on Ayn Rand. It was enlightening to say the least. But, I did learn that I never wanted to read one of her prose books. But the cliff note comic book version? This is perfect for my short attention span.
Gwen: I don't even want to read the cliff note version after that email conversation.