Lee: IDW is definitely one of my favourite sections in previews these days. There is always something for everyone. Let’s hope this month doesn’t disappoint.
Thomm: I’m writing this in the midst of feeling ill, so anything that’s not a nap is going to disappoint me right now. 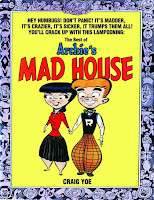 Archie's Mad House Vol. 01 HC by (W/A) Dan Decarlo, Wood, Schwartz
Brilliantly combine satire magazines, super-hero send-ups, monster magazines, sexy teenage girls a la Betty and Veronica, surrealism, beatniks and hippies and wackiness and you've got the inimitable Mad House. Mad House was the birthplace of the bewitching Sabrina the Teenage Witch, Captain Sprocket and the comic host with the most, Clyde Didit. Archie's best artists, Dan Betty and Veronica DeCarlo, Sam Jughead Schwartz and even cartoonists like Wally Wood-yes!-filled Mad House's pages with laughs and lunacy and nutty fun-and hot teenage chicks. Craig Yoe collects the best of the best stories and features, and introduces Mad House with rare art and behind the scenes secrets. $34.99
Lee: I’m a huge fan of humor so this is an easy buy for me. I’m not sure that all the jokes have aged well but I bet it will still be fun.
Thomm: Maybe it’s me but this is way too close to pushing kids as sex objects. I know the Archie books well enough to know that it’s nothing salacious, but the hype here has a fixation on “sexy teenage girls”, who we all know are in high school, which makes them under age. The book’s fine, I’m sure. The hype not so much.

Bat Boy: Weekly World News Strips by Peter Bagge HC by (W/A) Peter Bagge
Collected for the first time in one deluxe hardcover edition, Peter Bagge's Bat Boy strips, which ran in the Weekly World News for two years, are filled with all the insanity, inanity, and cartoonish humor you'd expect from a team-up between Bagge (Hate) and the Bat Boy (beloved). See Bat Boy attain the office of the Presidency (alongside adopted First Lady Martha Stewart and Secretary of Defense Li'l Kim) and much other craziness. $17.99
Lee: And if anything screamed total insanity it would have to be this book. To summarize, Bagge created a recurring strip in a second rate newspaper in which I imagine he had limited, if any editorial controls. Oh yeah, I am sure this is full fledged insanity.
Thomm: Calling the Weekly World News second rate is an insult to the actual second rate papers, like the Baltimore Sun. It’s a tabloid and one that specializes in fictitious stories such as the Chinese are planning to blow up the moon. Really, I can’t imagine Bagge’s stories are any more outlandish than what’s being sold as news. Insane is the operative word all around.

Deep Sleeper HC by (W) Phil Hester (A/C) Mike Huddleston
Cole Gibson is a frustrated writer and family man haunted by terrifying nightmares that prove to be a doorway into a hidden level of reality populated by dazzling and frightening beings. There is a war being fought on this astral plane, a conflict waged with unfathomable forces by creatures beyond imagining: body-stealing shamans bent on usurping the power of God; a planet-killing personification of violence clothed in the flesh of his victims; warrior monks who allow themselves to be possessed to harness the power of the demons they host; and a wasted husk willing to commit any atrocity to regain his physical form. Cole realizes that he himself is the ultimate prize in this war and that he must risk his sanity and his soul to save his family. A unique blend of horror, love story, philosophy and action from the creators of The Coffin! $21.99
Lee: IDW released a hc of Hester & Huddleston’s first collection, The Coffin, and are back again with this release. The problem is that The Coffin was much, much better than this book. Deep Sleeper is good and worth a read but I’d get The Coffin first.
Thomm: I have no knowledge of this one but I’m already pondering the existential question of whether it’s even possible to usurp the powers of the Judeo-Christian God. I don’t know if this is done well, but its premise is interesting. 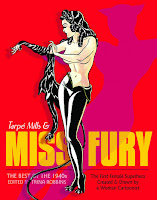 Miss Fury HC by (W/A/C) Tarp Mills
Catfights and crossdressers, mad scientists and Gestapo agents with swastika branding irons-it's one lurid and exciting adventure after another in this lavish, full-color collection of the first female superhero created and drawn by a woman. Miss Fury was a sexy adventurer clad in a skin-tight panther costume. By day, she was socialite Marla Drake. By night Miss Fury. In the first half of the 20th century, women cartoonists could be found in America's newspapers, but Tarpé Mills was one of the few who drew adventure comics, and the only one who drew a costumed superheroine. The Miss Fury Sunday newspaper strip ran from 1941 until 1952 and had millions of readers, among them GIs who painted the beautiful action heroine on the nosecones of their bombers. $49.99
Lee: This is a collection of GA comics, with GA age art, and GA storytelling so you either like GA stuff or you don’t. Personally, I love it! While the art is crude by today’s standards, but still very enjoyable, it is the stories that make this soooo much fun. I think it’s when the bad guy brands(!) a swastika on a female characters’ head you know this is something different. It’s expensive but great fun if you can afford it.
Thomm: Not particularly different from the actual Nazis who tattooed numbers on the victims of the Holocaust or made them wear scarlet letters. And wasn’t the Spirit leaving his mark on people around this same era? I know the Phantom was. I like GA in limited quantities but I’d feel more confident if the hype was more knowledgeable about the period when this was created. GIs were the army grunts on the ground. They weren’t the Army Air Force guys who would have painted Miss Fury on nosecones of planes.

G.I. Joe / Cobra Vol. 01 SC by (W) Christos N. Gage, Mike Costa (A) Antonio Fuso
G.I. JOE has an enemy. But until now, that enemy has remained hidden. Join undercover agent CHUCKLES on his descent into the world of COBRA. His mission is to obtain valuable intel for the G.I. JOE team, but he just might sacrifice his soul to do it. This volume collects issues #1-5, plus the 5-page prequel, as well as the Xamot and Tomax follow-up! TPB Full Color. 132 pages $19.99
Lee: Just so everyone is aware, this is not a new release. At first, I avoided all the Joe titles because IDW flooded the market with them. Unable to tell which was going to be good or bad, I bought nothing. Now, the dust has settled and it turns out that this book is really very good. At least, that’s what all the guys at the store say, so now I shall try it.
Thomm: Eh, a pass for me. I’ve read some good things about various G.I. Joe stories over the years but the entire concept just doesn’t appeal to me. Maybe it’s because I was already a teen when this got its launch in the ‘80s.

Thomm: While I think accessibility to stories already published is a great thing for the industry, I would like to see more new things from IDW. It seems like we’re grading on a curve if we say IDW is putting out great stuff when we’re judging most of its competitors on the new stuff they’re putting out. It’s a lot easier to put out good old stuff that’s already been vetted by critics and readers than it is to come up with something new that’s quality. All that being said, if I had one thing to pick out of this list it would be Bat Boy. Insane is good.
Lee: Let's not even get into this discussion because it will never end. The fact is, IDW is one of the most balanced publishers out there. There is a ton of older, strip type material, and plenty of new stuff such as Angel, GI Joe, and Dr. Who. I just don't talk about many of the ongoings because they are ongoing. I feel it's more important to point out the stuff that is off the beaten track that most wouldn't normally consider.
Posted by Lee at Friday, February 18, 2011