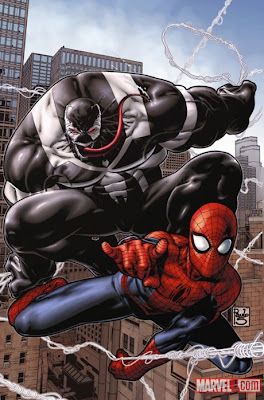 So the Amazing Spider-Man 500.1 is Marvel’s latest attempt to solve the problem that is Venom. By any definition, one of the most successful characters of the 90’s, Venom has long proven a difficult problem for creators to solve. In short, he’s a fantastic visual (an evil, monster version of Spider-Man) with a character that never really made a whole lot of sense. Sure Venom looks cool, but try explaining him to anyone. See, Spider-Man got a symbiote costume from a machine during the Secret Wars crossover and it turns out it was sentient and trying to take him over, so it split from him and took over Eddie Brock, a disgraced reporter who hated Spider-Man and blah blah blah we could be here all day.

Anyway, he proved so popular that Marvel tried to make him a hero over the years and given that his book featured subtitles like “Lethal Protector” you can guess how well that worked out. One of these included making him an agent of the government, and since this is superhero comics and they’ve never had an idea they won’t try twice, we’re giving it another go.

To be fair, they’re putting their shoulder into it this time. We’re not simply having Venom squabble with some government handlers. Long time Spider-Man supporting character and recent legless veteran Flash Thompson is the newest host of Venom and he’s conducting espionage missions for the government. Instead of the typical look for Venom, Flash uses it as a kind of swat team suit, mixed with the traditional look of the symbiote. It’s a very slick new design that not only looks good, but reinforces the new approach to the character.

In addition, the symbiote is being very tightly regulated by the government. Flash can only wear the suit a certain number of times and can’t keep it on for more than 48 hours. All the while, his government controller has a kill switch that can fry his brain if he loses control of the symbiote. The bureaucratic approach of managing the symbiote not only further reinforces the new status quo and helps make it different from any previous take we’ve had on this character.

So we have a new take on an old character, but how does it work? Well, if this issue is any indication: pretty well. Flash uses the suit for an espionage mission for the government and then for a rescue mission. He clearly enjoys the power of the suit, not to mention the thrill of having his legs back, but also struggles to keep its more savage side in check. In fact, he loses this struggle when his fake “legs” are blown off and turns back into the Venom we all know and love. It’s a fun action adventure and the black ops focus gives it a bit of an edge. It should be extremely interesting to see what Rick Remender can do with this set up on the Venom series. And while Humberto Ramos won’t be the ongoing artist on this book, he shows what the visual possibilities of this version of Venom can be.

Honestly, the book’s biggest flaw is the fact that it’s a Venom book, not a Spider-Man book. In fact, Spidey only shows up briefly as Peter Parker (aside from a 2 page teaser for the next year in the back of the book). If you’re not interested in the upcoming Venom book at all, this seems to be a bit unnecessary. However, if you are even thinking about checking that book out, this issue is well worth your time. Its very good stuff and if Remender wasn’t enough to do it, it would probably get me to check out the new Venom series. Give it a look and see what you think.
Posted by Greg at Thursday, February 17, 2011