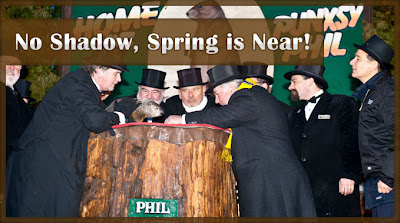 So far this has been a much better winter than last year in terms of snow, but it sure has been cold. Although, it looks like we're getting a respite from that this weekend with temperatures in the 40's. I don't get to celebrate G-Hog day as much as I used to with giving and receiving gifts and such (My best friend from high school mailed me a SPAM t-shirt for my first Groundhog's Day celebration back in 1989). It was a great substitute for Valentine's Day when I was single. Well, this year I at least got some comics that day! Haven't read them all though, but here's a few... 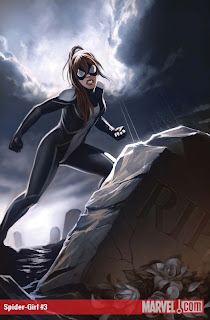 Much, much better than the last issue. Clayton Henry only handled the art for half the story again, which I knew in advance thanks to Paul's response to my e-mail. It was more satisfying this time around though, because it was split up with the middle part handled by others. Anya finally reveals her secret identity to Sue Richards after her father is buried ("He's [REALLY] Dead, Jim"). This was the conversation I was hoping for last time and I wasn't disappointed. There were a couple of nice unexpected elements in the execution. Anya had Sue remain invisible while she talked, which may have surprised some readers when they found out who she finally confided in, but more importantly it made sense that it would just make her more comfortable to share her secret. The twist was that Gil, Anya's father, had already told Sue sometime ago. Thanks to money from Reed's patents, Anya now has enough funds to live on her own and I gather Sue is her guardian now. Still makes me wonder why her father had to die in the first place. There are too many orphans in the Marvel Universe, but that's a topic for another day.

The middle of the story had a LOT of explanation as to what happened last issue with the Red Hulk. Turns out he was drugged and her dad was too, because he and Ross were both investigating someone who had been murdered. So (and this is a little cheap I think) the Red Hulk didn't actually kill him when he crashed a wall on him, because he was going to be dead anyway from the poison. It looked the like art was divided between at least two people. I didn't mind the latter part, but the first part was too exaggerated, especially with her hair being drawn as long as Spawn's cape. The worst part was the ridiculous scene where she shows her underwear while changing in an alley way. It could have been done much more tastefully. I also didn't like that the guy spying on her is not just some random nutjob, but it's actually her next door neighbor. Didn't Nomad already go through something like this last year in her Captain America back-ups? "Yeah, Anya, I can relate to creepy men who want to harm young girls". Let's try a new plot people. 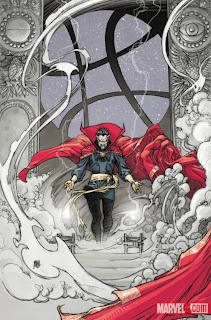 Doctor Strange: Secrets of the Vault #1

I really enjoyed this comic (and amazingly it was only $2.99), even though it has partially been "in the can" for over 12 years! It was supposed to appear in the late Marvel Universe title written by Roger Stern, but the book was canceled before it saw print. The plot and art were finished, but I think Roger had to write the script more recently. It's basically an "untold tale" of when Doctor Strange bought his brownstone in Greenwich Village. This is back before he got his red cloak of levitation. The art by Neil Vokes is excellent and really evokes Steve Ditko's style with a dash of that Bruce Timm animated look.

It's a flashback tale with a lot of flashbacks right from Doc's origin story (one of my favorites). From John Byrne's Lost Generation maxi-series, Strange was active before the Fantastic Four in terms of continuity, but you could place this tale anytime whether in the late 50's or early 60's or ten years ago on the Marvel sliding time scale. His real estate agent actually smokes cigarettes. When's the last time you saw that happen? Turns out the house is both cursed and haunted, requiring Doctor Strange to deal with the Chaos-Entity responsible. In one scene he is tempted by an illusion that speaks to his former self-centered ego as the arrogant surgeon. Stern's rhyming spells read very well too.

About the only thing I didn't like was the cover. Strange looks too evil and it had nothing to do with the story. It would've been more effective to make it look like an old vintage 60's cover and Doc certainly shouldn't have been wearing his red cloak! It also made me realize how much I miss regular Doctor Strange stories -- it's been far, far too long (I guess the last one was that excellent Marcos Martin mini-series). I would love to see a revival by this creative team. 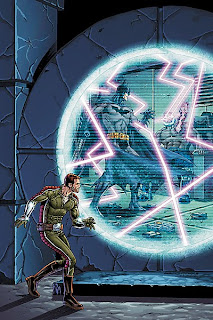 "The Search for BATMAN is Over!" our beloved comic store owner mockingly read off the cover when I purchased my copy. Yeah, I get the point. Bruce has been back for such a long time already, it was pretty ridiculous to pretend that the "news" was still relevant. But anyone who has stuck through this series this far already knew that this was just an offshoot of the Booster Gold/Rip Hunter story line. I've been enjoying Booster since Jurgen's departed that title, but this didn't need to be a glossy $3.99 a month mini-series when it could have just as easily been in the regular book. Maybe Dan is going back to the book in issue #44.

Still, overall I liked the series and it was especially nice to see the father and son scenes with future Booster and Rip as a child. I'm astounded that this storyline is still going strong sometimes, but I'm really getting to like Booster and now want to read his 1986 adventures to see how he started out.

I still have this week's ASM and Married Life with Archie to read. My comic book list has really started to grow lately, I added three books to my pull list this week: FF, DC's All-New Batman Brave and the Bold, and Boom's Planet of the Apes series. That's in addition to Boom's Elric series and IDW's Godzilla. It may not be a sign of improved economic conditions, but there's certainly some interesting books coming out and I forgot to mention the one premiering next week: Spongebob Comics from Bongo!
Posted by Matthew at Saturday, February 05, 2011