Having an eidetic memory would really come in handy as a comics reader. I could remember everything from month to month without effort. Alas, I don’t have an eidetic memory. On the other hand, the crappy stuff at the end of the List leaves my memory after a short while, so that’s a good thing. As my boss likes to say, no benefit without burden. Off we go, to the first List of 2011.

1. The Walking Dead 80 – Kirkman, Adlard and Rathburn kick off the No Way Out arc,

which really had a first nod in 79, but it’s off to a quick start. I don’t think the zombies have appeared this threatening since the prison was overrun. We all knew the community couldn’t last once our band of intrepid survivors arrived, but Kirkman’s turned it toward the inevitable disaster more rapidly than he did with the prison. While he used some similar aspects to that story in having a more merciless group of survivors being the instigators of the zombie problem, it was a much smaller scale this time, without so much fleshing of the characters of the vile survivors. What’s happening in the community is much more predominant than a balanced look at opposing groups of survivors, as occurred with Woodbury. It’s well worth it just for the exchange between Karl and the son of the wife and child beater that Rick killed. That and the widow trying to jump Rick’s bones.

2. American Vampire 11 – Man, I’m lovin’ this 2 issue story with Pearl and Hattie, and they never even come in contact with one another. Jazz vampires is getting through the Depression is highly entertaining, and Pearl kicking ass on some old school vampires always provides good entertainment. With no Skinner Sweet I found the focus of the book to be the best it’s been so far. Obviously we’re setting up a long term fight with Hattie and Pearl. No doubt Skinner will play a part, too, probably taking neither side and just trying to pick off the survivor.
3. Scalped 45 – Hard to believe this book’s nearing a 4 year mark. It seems both too long and too

short. Too long because of all the story that’s been packed into it so far, but too short because it doesn’t seem like it’s been around that long. We’re off on a new arc this issue, focusing on Red Crow. I know Dash was the original focus of the book, but Red Crow has to be one of the best, most fully developed characters in literature. Plus, we check in on Gina a bit, too. It’s particularly interesting that Red Crow’s having visions. Usually our visionaries are drug addicts in the midst of hallucinations, not stone cold sober mobsters/reservation chiefs. Oh, and Red Crow’s facing an election challenge from his mentor. Guess that’s the main deus ex machina, actually.

4. Secret Six 29 – Who knew these guys had a logo? Not me until this cover, with its tie to all the other books for the month and their white backgrounds. A fine cover it is, too, even though it’s totally static. Mostly, though, this issue shows why this concept should only be handled by Gail Simone. The issue is the second part of a story that started in, hmm, I don’t know where it started. Action Comics, maybe? Whatever it was, I didn’t read it. Anyway, Simone’s coming into the middle of this cross into another book and starts out with beautiful narration by Rag Doll, the single most insane character in a cast of insane characters. Simone even makes Vandal Savage and Lex Luthor interesting, though I usually find both to be over used archetypes rather than actual characters. As crazy as he is, Luthor seems like he’d fit in with the Secret Six, but for the part where he’d try to run the show. Trying to kill all of the rest of them would just be in keeping with the group. Best Rag Doll line of this month: “Do you know, I never thought heaven would smell so much like soiled panties.” A close second, though, is “Well, the angels have machine guns. I adore you, heaven.”

5. Fables 101 – Yeah, bring on more Bufkin! The flying monkeys were always my favorite part of the Wizard of Oz movie. Really, it’s too bad we only have one in the Fables world, but maybe we’re heading for more. In this issue Bufkin climbs a tree. A very big tree that leads out of the Business Office of Fabletown, which, as we’ll all recall, is trapped in another dimension of sorts since the Dark Man destroyed Fabletown. Frankie and the Mirror are left behind, but one of the Barleycorn girls, who wears a page from a book, sneaks along with Bufkin. We end up in the Oz world as written by L Frank Baum, so this should be interesting. Now, if Dream shows up with Merv Pumpkinhead, I’m laying odds that Merv beats Jack Pumpkinhead.

6. Northlanders 36 – Ok, this is even more of a surprise than Scalped. Three years. Seems like it just started yesterday. Anyway, the conclusion of the two issue arc, The Girl in the Ice, is fittingly brutal. Our hero is a scapegoat. Viking politics is a bit more severe than our modern version. A lot more severe than modern Icelandic politics. Our victim in the ice is even younger than I thought in reading the first part. Makes the father of a middle school girl a bit nervous. Well, it would if I didn’t think she could handle herself.

7. Guarding the Globe 3 – Ah, creator owned properties. When the creator is a talent like Kirkman, you get glorious things like this. Not only is the worldwide team continuing to grow, Kirkman went right back to finishing the story of Gorgg that was still out there at the end of Astounding Wolf-man. Wolf-man’s team needs some help in fighting the monster from below Stonehenge. I love that the Yeti has no neck. He’s right close to Arnim Zola, actually. And the guy who’s the head of The Order seems to be channeling The Humungus from the Road Warrior. Don’t know if that was intentional, but if some kid with a metal boomerang pops up I won’t be surprised. Best moment? The impending international incident of Stonehenge in upstate New York.

8. The Unwritten 21 – Carey and Gross have used the method of mini-chapters within an issue previously and it works well here as the story shifts between cast members in different locales and realities. The old woman with the puppets is harkening back to another Marvel villain, the Puppet Master. Not that she looks anything like him. I will be very surprised if the Thing shows up, though. But, will there be a great white whale next issue or did Tom break the world of Melville?

9. Incorruptible 14 – So Max is learning scale the hard way. Lesson 1, tearing up a bridge and destroying a fire truck are not appropriate responses for catching a pickpocket who likes to dress as a creepy clown. Looks like now that the Plutonian’s gone the Paradigm is coming over to Max’s book to engage in a page filling donnybrook. I’m sure it’ll be a good fight next issue, but I mostly want to see what resolution Waid reaches for the conflict, as it’s unlikely either can knock the other out of service and they’re ostensibly on the same side now.

10. Ex Machina Dirty Tricks (trade 8) and Ring Out the Old (trade 9) – I’ve only bought this book in the trades, so it can be awhile between visits. Still, I’m always right back in the thick of things for our mayoral superhero’s tale. The first one deals with a groupie who’s created her own superhero identity but has problems figuring out an acceptable outlet for her crush on Mayor Hundred. She doesn’t have any powers, just some ability to set up stunts. Kremlin continues his machinations to get Hundred out of the mayor’s office, ideally to get him back into his superhero gig. The second one pushes Kremlin’s plot further forward and delves into more of Hundred’s origins, as well as his primary nemesis. Looks like they’re both the results of exploratory force by an invading alien species, taking this whole series more into the realm of sci-fi than superhero. The first issue of the second book had a particularly interesting e 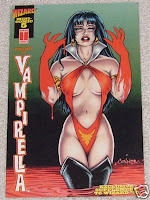 22. Vampirella MiniComic 5 – This is some mini that’s a supplement to Wizard. Who knows how it came to be a separate item stuffed in a free bag. There’s nothing much to it except for the fact that the artist was Amanda Connor. I’d only heard of Connor with the recent Power Girl series, but this is from 1995. She had it working then, too.
23. Human Defense Corps 2 – I think this was actually the book that made me choose this free pack because Ty Templeton was writing. It harkens a bit too much to Frank Miller’s Martha Washington with its astronaut afloat. I think the premise of a guy joining a military force to protect humanity from aliens but vowing never to kill a human was too unbelievable. Partly, it’s the fact that anyone who’s in the military has to know there are often friendly fire fatalities.

24. The Warlock Chronicles 2 – Now we’re hitting the dregs. I know Jim Starlin has written some of Marvel’s best space epics, but this mess from 1993 is just awful. It’s all talky meandering through space/time with nothing happening. And, oh, the ‘90s art stylings. Hash marks galore. Of course it continues into another book, too. Looks like one of the crappier line-ups of the Avengers will be making an appearance somewhere down the line.
25. Silver Sable 21 & 30 – But wait, there’s worse! Not only does this bit from 1994 have terrible

plotting and crappy Liefeld style art, it’s freakishly unable to depict something as ubiquitous as the LA riots following the Rodney King verdict. Writer Gregory Wright, who’s no doubt operating under some editorial mandate, has racial unrest so pervasive in LA that gangs are united behind

one woman and take over Beverly Hills. For some reason the police can’t or won’t take it back, so Silver Sable’s mercenary force does. That’s just issue 21, which is so chock full of ridiculous racial stereotypes you could choke on it. Issue 30 is no better, with our titular hero in prison on some trumped up charges, taking beatings so that she won’t be held longer while some excuse is created to get her out. Coincidentally, the woman leading the gangs in issue 21 is in prison with her and becomes an ally. Bad as all that is, the worst thing is what they’ve done to Sandman. From a tragic villain in Spider-Man he’s now on Silver Sable’s payroll and looks like Banshee after a bad night at the disco.
Posted by Thomm at Sunday, February 06, 2011