Directly after the demise of Keith Giffen and J.M. DeMatteis’ critically acclaimed Justice League International (the “funny” league with pre-Checkmate Max Lord), Dan Jurgens took over both the writing and art for the title, adding Superman to the mix. I had given up on the JLI a few months before, having initially jumped on board to enjoy the awesome Adam Hughes art and he had already left by this point. Other than some big-event tie-in issues and maybe two other’s that I got off the rack when they were published in 1992 and 1993, I only finished collecting the run recently, which means it took me 18 years!

I didn’t just fill in all the holes at one time either. For two or three years now, I’ve been picking up bits and pieces and I actually thought I finished at last year’s Comic-con. However when I started reading the run recently, I realized that I was not only missing an Annual, but I was also missing the series kick-off in Justice League Spectacular #1. Thankfully, my LCS sold me both for only a dollar each.

The storyline runs for about 22 issues by my counting, including three in another title. There is a consistent look throughout with Dan Jurgens providing the story and layouts in the regular series along with Rich Burchett, who handles the finished art with his smooth inks. (Rich has become a staple in DC’s more kid-friendly line over the years and is currently drawing the All-New Batman Brave and the Bold.) Artistically, Dan Jurgens had “made it” at this point in his career and was producing some top-notch material with a lot of dynamic panels. The really amazing thing is that he was doing TWO books a month AND meeting deadlines too! As a writer his stories are very enjoyable, although sometimes the dialogue is a little stilted, but some of that is just how it was done back then.

This week I’ll be highlighting roughly the first half of the run, which includes the aforementioned Spectacular, Annual #6, and issue #61 through 68, which are cover-dated April to November 1992. (It’s no wonder I missed these the first time around, I was too busy falling in love with my best friend, getting engaged to her after dating for a month, and preparing for our wedding. 1992 was MY “summer of love”). It’s remarkable that this period isn’t discussed more, because all the key “fun and games” elements of the JLI are still in place: Blue and Gold, Fire and Ice, Max and Oberon, and the always highly entertaining Guy Gardner. The only one missing is Martian Manhunter (snicker). 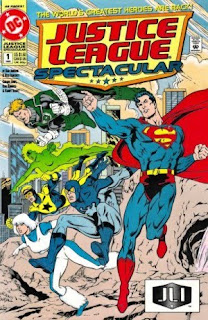 The Justice League has disbanded (apparently fans wanted a more serious Justice League) and Blue Beetle is now getting fat eating chips, drinking beer and watching the Brady Bunch. Booster tries to snap him out of his funk and Fire and Ice visit the old HQ too (and I do mean “old” -- the original JLA Cave headquarters), when the Royal Flush Gang attacks an amusement park in Florida. It turns out the Royal Flush Gang’s involvement was orchestrated by Max Lord to get the League back together. Unfortunately, things are more serious down south than Max bargained for, because someone else out-hired the Gang from him. Without a league, it’s a job for Superman, but first Batman (ever the loner, but often working with others – long before Batman, Inc.) tries to convince Superman to fill in Martian Manhunter’s place and lead the team. “Sorry, but…No. The League just isn’t my style.” Well, you know by the end of the Spectacular “The Justice League is alive and well and ready to kick butt! BWAH-HA-HA-HA_HAAA!” You can tell Superman isn’t quite sure he’s really ready for this as he glances up at Gardner when he makes the declaration above. Oh and Justice League Europe with pre-Parallax Hal Jordan co-star in this issue too. 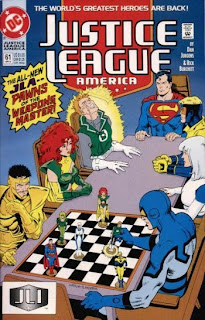 I love the cover to issue 61, mimicking the very first JLA issue with the chessboard. Also, notice the banner over the title: “The World’s Greatest Heroes Are Back!” It was the Weapons Master (the guy in gold) who out-funded the Royal Flush Gang from Max Lord. Maxima from the Superman series starts hanging around the team in hopes that Superman will become her mate and help her rebuild her homeworld. Beetle, Booster, and Guy just want to mate with HER! Max’s happiness to be in control again ends when Superman informs him that the League exists because there is a need for it and it isn’t his anymore. Ice is so impressed by Superman’s strong talk that she immediately develops a crush for him, which doesn’t make Guy too happy. The Weapons Master, using his unlimited arsenal of weapons that he can just teleport from limbo, takes out the League quickly having studied them during the amusement park affair. His goal was to steal Guy Gardner’s power ring for a Dominator. He’s surprised by the mysterious Bloodwynd and returns to limbo where he forces Beetle to play a game to help save his friends. If Ted picks the wrong square the person will be teleported to a planet where they will certainly die! 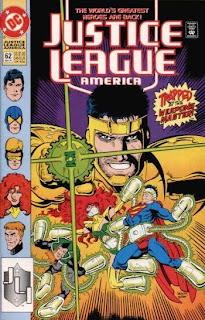 Issue 62 is one of the rare ones not finished by Burchett, instead Jackson Guice fills-in. By forcing Blue Beetle (the weakest and most useless member of the team to his thinking) into such a critical role, Weapons Master unintentionally actually brings about one of the best changes to the series, the manning up of Ted Cord. He’s smart like Tony Stark smart in terms of tinkering with things. The day is saved and by the end the League has a new headquarters and two new members: Maxima and Bloodwynd. How could a “nobody” like Bloodwynd be accepted so readily by the team? Maybe, there was some mental manipulation going on. The vertical headshot stripe is introduced on the cover of this issue and only appears on three others, but it gives the book an Avengers feel and I liked it.

I place the Annual next based on Fire’s costume. It’s drawn by Dave Cockrum and written by Dan Mishkin under the designs of Jurgens. It’s typical multi-cross-over annual fodder and leaves you hanging with Maxima still under the influence of Eclipso. However, it still serves as a good vehicle for team interaction and again gives Blue Beetle a chance to think his way out of danger. Wonder Woman guest-stars too, which is a foreshadowing of her joining the team later in the run. 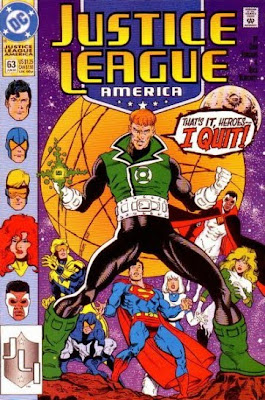 Issues 63, 64, and 65 form the Starbreaker storyline. You just gotta love the cover to #63 with Guy quitting. He’s sick of Superman ordering him around. He not only quits, but he also leaves the team stranded out in space. I had never been much of a Gardner fan before, but I really started to love him here. This story takes Maxima down more than a few pegs, beginning to humanize her. She returns to her world, because Starbreaker has enslaved it and her people ridicule her for abandoning them (In the end, she is exiled from Almerac). He’s a pretty powerful planet-destroying foe, and an old Justice League villain to boot. I like that the arc isn’t numbered on the cover, just good old-fashioned monthly cliffhangers. Oh, and Fire gets her new skin-tight full body suit costume (That’s for you, Lee). 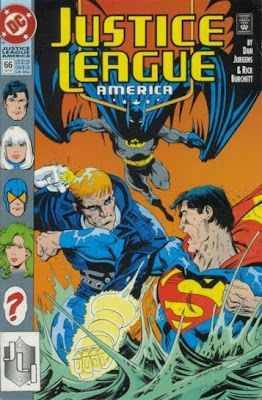 I love issue 66! Superman versus Guy Gardner, who is newly, outfitted with a Sinestro ring and some cowboy boots. He’s out to make peace, but they think he attacked them due to the Atom tripping an alarm. There’s a great panel where Guy is going to use a yellow power ring drill to enter Booster’s brain! Along the way, Beetle is getting more suspicious about Bloodwynd. In the end thanks to Batman’s advice, Superman asks Gardner to rejoin the team to help keep “the loose cannon under control”, by being a role model to him. 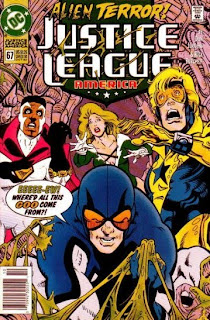 I guess you could call issue 67 a cheesecake issue of sorts. Fire is posing for a calendar, which we hilariously find out later is being funded by Booster! She also gets another costume, I suppose you could call this the “Teddy” costume with the shoestrings. Maybe she just bought the wrong size? There’s a really funny Blue and Gold sequence with Power Girl and a transporter. Blue Beetle is giving everyone signal devices, so that he can secretly track Bloodwynd, only Superman refuses to wear one. Half the team rescues a missing space shuttle and encounters an alien who claims to OWN the entire solar system. 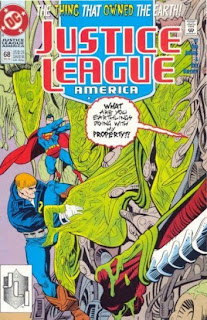 Issue 68, is artistically another favorite and opens with a stunning splash page of a giant yellow power-ringed Guy Gardner looking all over Metropolis for Superman. Who, you’ll remember wouldn’t wear a JLA pager. They need to find him, because the other half of the team is now missing, having been captured by the alien from last issue. It turns out the alien DOES indeed own the deed to the galaxy, so Maxima tricks him with Gardner’s aid by artificially creating an enormous fortune to buy it from him. With the deed in hand, Guy’s ready to rule the world, until Superman burns it away with his heat-vision. Fun and Games – the calm before the storm…