Jim: Wow it has been a long time since I have done one of these, but Lee conned me into coming back and doing the DC books since I more of a DC fan, although not by as wide of a margin. Gwen will be along to help.
Gwen: What this really means is people who actually like DC will be commenting this month. 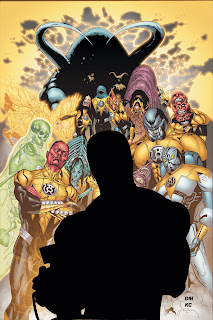 GREEN LANTERN #65
Written by GEOFF JOHNS
Art by DOUG MAHNKE and KEITH CHAMPAGNE
Cover by IVAN REIS and OCLAIR ALBERT
1:10 Variant cover by GEORGE PEREZ
The “War of the Green Lanterns” takes a shocking turn! With the entire Green Lantern Corps against them, the four Earthborn GLs make a choice that will rank among the most memorable in GL history. But not all of them agree on what has to be done and what lines are to be crossed. Plus, the countdown to the live-action film continues with another exclusive look at the upcoming GREEN LANTERN movie!
Retailers please note: This issue will ship with two covers. Please see the Previews Order Form for more information.
On sale APRIL 13 • 32 pg, FC, $2.99 US, RATED T
Jim: I have mixed feelings about the “War of Green Lanterns”. On one hand I’m glad to see that we got to the event as it feels like we have been treading water for awhile. On the other hand I don’t want comics to be written as bridges from event to event. Eventually I want to see Hal Jordan have a private life again. Each book is better if they just tell us adventures of different characters and not make everything always have to be a major change, that doesn’t happen.
Gwen: I feel like this event was specifically timed for the movie coming out. It seems to be more of a hype event than a plot but I'll have to wait and read the actual books. 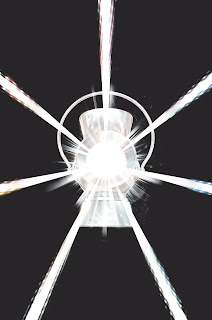 BRIGHTEST DAY #23-24
Written by GEOFF JOHNS and PETER J. TOMASI
Art by IVAN REIS, PAT GLEASON, ARDIAN SYAF, SCOTT CLARK and JOE PRADO
Cover #23 by GARY FRANK
Cover #24 by DAVID FINCH
1:10 Variant Covers by IVAN REIS
It’s the beginning of the end as we head toward the epic conclusion to BRIGHTEST DAY! The mystery of the heroes’ return and the secrets of the white forest are revealed! Plus, Captain Boomerang draws closer to completing his mission! And at last, it’s Firestorm vs. Deadman!
And in the extra-sized issue #24, a new age for the DC Universe begins! A long shadow is cast across the world in a a finale that will have everyone talking! Twelve heroes and villains were resurrected, but that doesn’t mean it will remain that way as the new champion of Earth is chosen!
Retailers please note: This issue will ship with two covers. Please see the Previews Order Form for more information.
#23 on sale APRIL 6 • 32 pg, FC, $2.99 US, RATED T
#24 on sale APRIL 20 • 48 pg, FC, $4.99 US, RATED T
Jim: At this point it has taken so long I no longer care who the new champion of Earth is and I thought it was the champion of the white light, life.
Gwen: That’s true, why would the white lantern be the champion of Earth? All the rest of the lanterns are all over the universe. I have also lost interest with this event as it’s been really drawn out. 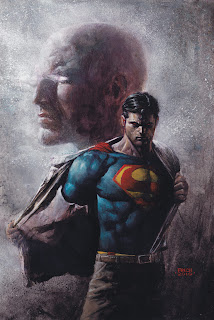 ACTION COMICS #900
Written by PAUL CORNELL, RICHARD DONNER, DAVID GOYER, DAMON LINDELOF and more
Art by PETE WOODS, JESUS MERINO and more
Cover by DAVID FINCH
1:5 Variant cover A by ADAM HUGHES
1:5 Variant cover B by ALEX ROSS
Superman returns to ACTION COMICS just in time for the title’s historic 900th issue, which clocks in at 100 pages! Everything Paul Cornell and Pete Woods have been building to over the last year culminates here in the ultimate Superman vs. Lex Luthor battle! But that’s not all - this story will lay the grounds for an insanely epic story coming out this summer in the pages of ACTION!
Plus, an incredible roster of guest talent help us celebrate this landmark issue, including the screenwriter of The Dark Knight, David Goyer; famed Superman: The Movie director Richard Donner; the co-creator of Lost, Damon Lindelof; and the creative team behind the hit DC UNIVERSE ONLINE game!
Retailers please note: This issue will ship with two covers. Please see the Previews Order Form for more information.
On sale APRIL 27 • 96 pg, FC, $5.99 US, RATED T
Jim: Cornell has been doing some good work on this book. I find it amusing that Superman was taken out of action since JMS wanted only his version floating around in the DCU and then he jumps off the regular book and Action has to build up to Superman coming back to his own comic.
Gwen: My favorite thing about this book has been the Jimmy Olsen backup stories. It will be nice to have Superman stories other than the Grounded stories. 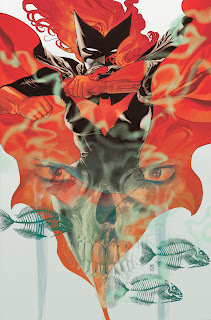 BATWOMAN #1
Written by J.H. WILLIAMS III and W. HADEN BLACKMAN
Art and cover by J.H. WILLIAMS III
1:10 Variant Cover by AMY REEDER
The multiple award-winning creative team of J.H. Williams III (DETECTIVE COMICS) and W. Haden Blackman (Star Wars, Force Unleashed) launch the first, chilling arc of the ongoing series fans have been clamoring for! In the 5-part “Hydrology,” Batwoman faces bizarre new challenges in her war against the dark underworld of Gotham and new trials in her personal life as Kate Kane. She quickly finds herself in the deep end facing truths about her past and her future. Who – or what – is stealing children from Gotham’s barrio, and for what twisted purpose? Can she train her cousin Bette Kane (a.k.a. Flamebird) as her new sidekick? How will she handle dark revelations about her father, Colonel Jacob Kane? How is she dealing with the supposed drowning of her sister, the villain known as Alice? And why is a certain government agency suddenly taking an interest in her? The road to the answers begins here!
Retailers: This issue is resolicited. All previous orders are cancelled. This issue will arrive in stores with two covers. See the retailer order form for details.
RESOLICIT • On sale APRIL 6 • 32 pg, $2.99, RATED T
Jim: And this time they really mean it. No more threats or empty promises, this book is really coming out and it will be monthly, LOL. I just want more Amy Reeder art please!
Gwen: I still feel that this book hasn’t found its niche yet. You need more of foundation before making a story this convoluted – it’s hard for me to keep track of all of Batwoman’s family members. I just keep coming back for Amy Reeder’s art. 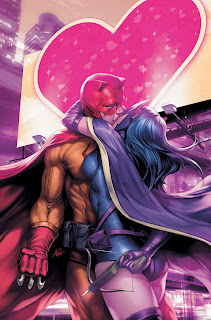 BIRDS OF PREY #11
Written by GAIL SIMONE
Art by PERE PEREZ
Cover by STANLEY “ARTGERM” LAU
It’s the FIRST DATE you’ve all been waiting for as Huntress and Catman make that long-threatened first attempt at romance . . . but can two hot-headed, red-blooded hunter-warriors on opposite sides of the law have a simple night out without trying to kill each other? Hint: No. No, they can’t.
On sale APRIL 13 • 32 pg, FC, $2.99 US, RATED T
Jim: This just sounds too good to be true, Gail should have a blast writing this issue, can’t wait.
Gwen: I’m still excited that we got Birds of Prey back with Gail Simone at the helm. It should be fun to see how Huntress and Catman interact. 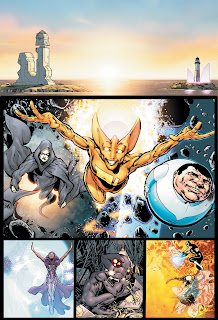 ADVENTURE COMICS #525
Written by PAUL LEVITZ
Art by PHIL JIMENEZ & ANDY LANNING
Cover by PHIL JIMENEZ
The “Legion Academy” arc by Paul Levitz (LEGION OF SUPER-HEROES) and Phil Jimenez (INFINITE CRISIS) continues. Starring Legionnaires in training, the team struggles with loyalty versus family . . . and the consequences are tragic.
On sale APRIL 6 • 32 pg, FC, $2.99 US, RATED T
Jim: My expectations for the Legion have been pounded down into the ground that this stuff actually seems to be okay lately. Of course adding Phil Jimenez as the artist is a big plus.
Gwen: I can’t stand any Levitz’s Legion stuff and yet I still keep reading it as it’s the only Legion right now. Ugh.

DOOM PATROL #21
Written by KEITH GIFFEN
Art by MATTHEW CLARK
Cover by MATTHEW CLARK
In this spotlight issue, witness the past, present, and future of the Doom Patrol through the eyes of the only constant member of the team. Through all its reincarnations, through all his remodelings – you can’t have a Doom Patrol without Cliff “Robotman” Steele!
On sale APRIL 6 • 32 pg, FC, $2.99 US, RATED T
Jim: Giffen has captured the essence of the Doom Patrol and is doing Arnold Drake proud.
Gwen: This is an interesting idea as while I’m familiar with the Doom Patrol I certainly haven’t paid attention to all of its versions. The past, present, future hook seems to be a good way to give newer readers an idea of the history this team has. 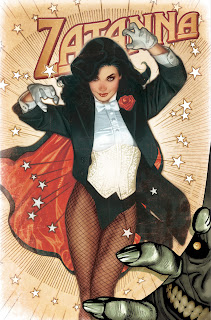 ZATANNA #12
Written by PAUL DINI
Art by JAMAL IGLE
Cover by ADAM HUGHES
Zatanna’s struggle against the newly rejuvenated Brother Night continues, and his scorched-earth approach has her reconsidering where she draws the line in dealing with her foes . . . and what else she can do to protect the world of the mundane from the world of the magical!
On sale APRIL 20 • 32 pg, FC, $2.99 US, RATED T+
Jim: I want to love this series as I have always loved “Z”, but the off and on nature of Dini being able to deliver a monthly book has left me a little cold about this title.
Gwen: I just can’t take the boob art. It’s hard to care about this story when Z’s breasts seem to be the main focus of the artist.
PART 2 Friday!!!!!!!!!!!
Posted by Jim at Tuesday, February 15, 2011