The Week of February 2 in Review

This week saw the launch of Marvel’s .1 program and I skipped the Iron Man issue. I personally see no need to pick up these issues unless I’m getting the series. I heard mixed reviews on Iron Man 500.1. The thing that strikes me as funny is X-Force 5.1 and some other books that just reset their direction recently, like Hulk and Amazing Spider-Man, it becomes ludicrous to do some arbitrary .1 issue which one day will be counted in the full numbering to get to some artificial anniversary number. 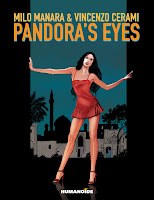 So this week I go into my bookstore and looked on the shelf and I see a Humanoids hardcover with Milo’s name on it. It took me all of about 15 seconds to decide to buy it. Milo’s art is absolutely amazing. He is well known for being able to draw beautiful and sexy women. Most of his work that I have heard about tends towards soft core pornography, but that is more so from an American sensibility I’m sure. This story was about a girl around 18 years old who is used as a pawn in an effort to capture her heretofore unknown father who is a wanted criminal by Interpol. It was not a masterful story, but it was an entertaining read and of course had the art of Milo Manara. He can draw it all and has all the ability of a great comic book artist, expressions, details, backgrounds, page design, story flow, but his women are soft, sexy and drop dead gorgeous. At this point I sound like a dirty old man, but his women are the ideal, not super hero proportioned, but very real and in Pandora’s case someone with some spunk and guile.

Again I break my own format and rules whenever it suits my feelings towards a book. If you can find this book it is work the $20 entry fee.

What I Liked – What an excellent ending to the war. We open with scenes of Earth being destroyed, which I immediately knew was a dream or something. In fact it was Mark musing about what was happening as they were racing to Earth. Instead we get the leader of the Viltrumite’s requesting a truce as he wants his people to mix in with Earth people as a way renew the Viltrumite race. Mark’s choice let them raise a new generation like him or try and fight the 37 left alive knowing it will destroy Earth, he accepts the truce. Another twist ending, that has the feeling of a logical ending and gives Kirkman story possibilities to last years. Ryan and Cliff carry the story capturing all the emotion and conflicts within Mark.

What I Didn’t Like – The Tech Jacket backup. The character just does not appeal to me.

What I Liked – What I always like about this series. It is fun, it is fast paced, it has action, it has humor and it has some way cool moments almost each and every issue. This issue the Secret Six are hired by a kid who inherited his grandfather’s criminal empire and the DP stands in the way of the kid’s goal. A raucous good time was had by all and we await the next issue of Doom Patrol for Part 2.

What I Didn’t Like – Nothing. This book hits its marks and provides quality entertainment each and every month.

What I Liked – I love the characters in this book. The new Black Condor is a bad a**, Phantom Lady is interesting and rather sexy, The Ray, Miss Liberty, The Human Bomb are all great characters. This issue we see Doll Man is being forced to come back into the group.

What I Didn’t Like – The story is taking too long. The first plot that started the series has not reached a conclusion. These characters are still relatively undefined and we are only getting bits and pieces of characterization as the long meandering plot is taking some time to reach a conclusion.

What I Liked - Neal Adams’ artwork, for the most part.

What I Didn’t Like – If this book makes any sense to anyone please comment on this blog and explain it to me. This book is like Grant Morrison gave his drugs to Neal Adams and then Frank Miller called Neal and helped him plot it out. It is crazy and all over the place. Even the art at times feels rushed. It is also so dense at times the words overwhelm the often extremely busy artwork. If I was ever inclined to drop acid (as we used to say) reading this book has convinced me that it is not worth it as it apparently scrambles your brains into an incoherent mess. Of course I’m assuming Neal (or hopefully an un-credited ghost writer) dropped acid to script this book.

What I Liked – That the super genius who runs the place Peter works for already has questions about Peter and Spider-Man. A super genius should be able to figure it out if Peter works for him that something is up. That Spider-Man called in the Avengers and Squirrel Girl answered the phone. The army of insectiod robots was too big for him to be able to handle and calling in the New Avengers made sense. The bit with Squirrel Girl was great comic relief.

What I Didn’t Like – Paying $4 for this book. I know it has a backup, but this was unrelated to the main story and an ad for a new Marvel series.

What I Liked – A good start to the newest story about Sir Edward Grey a Witchfinder. This time he has come to America and is in old west. A good start to this story that started fast and continued very well, never letting up. The best part of the book is the art. John Severin is 88 years old and is knocking it out of the park with his work. I first remember falling in love with his work on Sgt. Fury many years ago and at that time he was already an artist who has been around for some time. Most people don’t get to 88, many more are not able to be that active at 88 and even less still have fine motor skills it takes to be an artist. Also it is not like he skimps on backgrounds or details the man’s work looks great.

What I Didn’t Like – Zilch. Mignola’s stuff under the Hellboy umbrella is always very good stuff.

What I Liked – We only have seven issues left of this series. The art work is top notch.

What I Didn’t Like – After the Hawks turn to dust, the white light makes more cryptic statements trying to make me get the Green Arrow book again. Then Aquman and Aqualad swim along and talk, get attacked and Aquaman gets his hand chopped off. Now we know all the stuff going on is a crock as DC is not about to go back to a one hand Aquaman or kill the Hawks. This book is being written for the last couple of chapters and feels drawn out to get to 26 issues.

What I Liked – You can go home again. These two guys produce better Legion stories together then they do alone. I was worried it would be too much of revisiting old days but this story was set in current continuity and did a great job and bringing back and finishing off the new Emerald Empress. At the same time we saw the return (at least hints of it) the Lighting Lass and Shrinking Violet relationship. This issue had it all with great battle scenes, history on the “Eye” the annoying “eye” dialogue, a very good issue and the best since the recent re-launch of the LOSH.

What I Didn’t Like – That this is not the quality we get in the regular series (although it has gotten marginally better).

What I Liked – A great issue that accomplished a ton of things. First off it was a catch up issue before the next major arc. If a fan wants to get into this series this issue gives you a summary of what occurred, characterizes the cast of the book going forward, provides some human moments in the midst of a post apocalyptic world and is done in a landscape format. Jeff does a great job with this series and it often flies a little below some other books, but if I had done a top 15 for last year this book would have made it.

That puts a lid on this week’s review. I wish I had the time to sit down and write commentary on every book that I get, but since I started Comics And and not Facebook, I have to keep the day job.
Posted by Jim at Monday, February 07, 2011