Could Damian Wayne be checking out with Morrison? 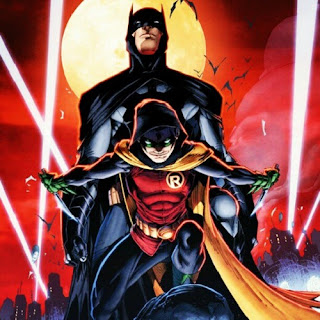 I have a weird love/hate relationship with the current Robin Damian Wayne. I hated his initial introduction and his eventual replacement of Tim Drake as Robin. Part of this hate that I carried stemmed from DC's inability to give Drake a purpose post-Damian's promotion to Batman's partner. The Red Robin series was ok, but we are now a year and a half into the New52 and Red Robin cannot hang onto a regular costume from one series appearance to another, let alone have any meaningful character development in his Scott Lobdell written series.

Tim Drake was my favorite Robin and the one I always thought, after years of slow and consistent tragedy, could eventually replace Bruce in the hypothetical future. (The unfulfilled promise for all sidekicks.) I loved that over the years Tim had adopted many of Bruce's personality traits in the Teen Titans and other titles. Part of my distaste for Damian can be connected to the sidelining of one of my favorite characters.

Even though I did not start off as a fan of Damian, I did start to develop the same affinity many others have for the character. Grant Morrison's fast-forwards into the future where a Damian Wayne Batman defended a darker and more twisted version of Gotham City were very enjoyable. The contrast between the annoying Damian and his more heroic, downtrodden future self alluded to character growth we had not been privy to yet. The next step towards my softening stance on Damian Wayne came when Bruce was lost in time and Damian became the Robin to Dick Grayson's Batman. The dynamic between these two heroes was exceptional, and I really loved the flipped deal of a well-adjusted Batman and a murderous, violent Robin.

I understand Damian's appeal as a character. He can be fun and funny and totally badass. The problem with him is that regardless of what some might think, he is essentially a one-note character. As soon as a writer puts Damian through any real heroic character growth he loses his appeal. More so than many heroes in the DCU, if you take Damian out of his character bubble, the essence of what makes him appealing disappears. Most mainstream comic characters need the illusion of growth, but what makes Damian fun is that he is essential a smug, silver-tongued terminator. He is a jerk. For Damian to continue to work in the way he does you cannot take him out of the caricature of himself.

With the released cover image of Batman, Inc #8, DC Comics is hinting that Damian's days might be numbered. This is probably misdirection on DC's part. If Damian "dies" in the eighth issue I almost expect him to be resurrected by the twelfth issue. He is a popular character, and they already introduced his "clone" in the pages of Batman, Inc, so there is a way to give the storytellers an "out."

The more I think about this situation, however, the more I do think Damian's death could be a real possibility. Grant Morrison created the character, fostered him through most of his emergence into the Bat-mythos, and I could see Morrison ending this new Robin right before he ends his long Batman run. It might not be forever and Morrison could always bring him back a few years down the road, but I think more and more that it could be a possibility.

Could we see the end of Damian because Morrison wants to retire his creation? If DC let any of their writers retire a popular character it would be Morrison. Could this be much ado about nothing? Sure. But I do not think we can rule it out. I believe there is also the possibility that Damian will not be killed off, but be forced to assume the role as leader of the League of Shadows, effectively giving him a new role in the DCU and Bat-mythos without having to kill him at all. 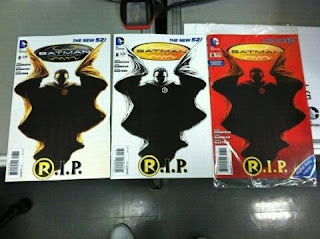 I think of the storytelling possibilities of letting Morrison kill Damian, and they are pretty interesting. It would put Batman in that dark place he was after Jason's death. Tim could come back as Bruce's partner and which would allow him to be in books besides the lackluster Teen Titans. In a few years when Morrison returns to mainstream superheroes he could always bring Damian back.

I might be reading too much into it, but Morrison's long run on Batman began with the introduction of Damian, and I could very much see his swan song end with the removal of the same character. Part of me wants to see this happen not just because it would give Tim Drake greater purpose once again, but because it would be a fantastic way to cap Morrison's run on Batman. Let Damian have a great arc as a character culminating in his heroic sacrifice to save lots of people, including the Bat-family. And if DC let the character stay dead as a favor to Morrison, it would make his character even cooler.

Everyone was looking to Scott Snyder's "Death of the Family" story for a major character death. I think if it is going to come, we will see it in Batman, Inc.

Email ThisBlogThis!Share to TwitterShare to FacebookShare to Pinterest
Labels: DC52