A little explanation for regular readers, the Week in Review is being deconstructed again or something. I always feel the need to change things around. So this week will be what it is and that is more commentary oriented towards whatever is winding me up. That means I will leave many books I read lying in the dust. Many books that I read, I enjoy, but normally it is only a few which stirs my passion.

Of course I need to still give you the links for new week’s book. The clean and concise list from my good friends at Cosmic Comix, home of the great mail order service I now get and the detail listing of Midtown Comics. The books that are making me giddy with anticipation next week are Fever Ridge Macarthur Jungle War, Mind Mgmt., GI Joe (it is a re-launch and curiosity got the better of me), Happy, Thor and Hellblazer (the last issue of the Vertigo run). Check it out to see what is getting you all hot and sweaty.  Okay enough frivolity onto my review. 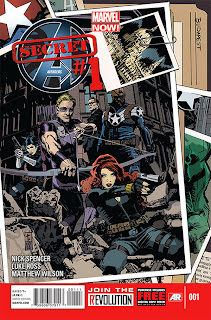 I guess I should thank Marvel for saving me $3.99 a month (or more as they publish as often as 18 issues of some books a year) by kicking me off Secret Avengers. I enjoyed the last iteration of the book and was curious as to where this version of the book would go. It didn’t take too many pages in for me to decide this was a one and done.

Before we get too deep into my opinion let me make it clear that I believe Nick Spencer is a decent comic book writer. He has yet to make me a huge fan of his work but he knows how to write a comic book. Next is the artist, Luke Ross is a good artist. Like many artists he knows how to tell a story. He is never going to make my list of artists I want to buy artwork from, but nevertheless a competent professional.

Now the flip side of that coin is that why do I want to pay $4 for an issue from the team of Nick Spencer and Luke Ross, neither are considered “A” list talent at this point in their careers. Sure I get a “free” digital copy for the extra buck and they have the “AR” feature in the book, but I think the $4 price point should be reserved for the top tier stuff.  I tried out two of the AR features, one was a joke piece and the second was Nick Spencer’s voiceover a page saying how this is going to be a great series and a lot of fun. Give me the creators talking about the book or why these characters are ones they love or something. The AR is very hit or miss. I will say this that at least Marvel is trying, DC does nothing cool with modern tech in their printed books.

Now the premise is SHIELD tried to recruit the Black Widow and Hawkeye to help them on certain missions. Due to the secret nature of the missions they will need to do memory implants. The Black Widow and Hawkeye so no thanks. (Of course this story is about to add insult to injury given what just happen over in Ed Brubaker’s swan song story in Winter Soldier.) As they are leaving Agent Coulson tells them that the threats they are working on will have a vested interest for them. He states that they will “REDACTED” and they decide to join up. Yes a favorite ploy of Nick Spencer is to have the mystery built in from the beginning. Problem is I don’t care. If you have a cool hook that will make them sign up and go against having memory implants, they tell me, This is bullshit and you may never do a reveal anyway.

What killed this book was they now ask how do they sign up and find out that Coulson secretly injected them with nanoparticles. These particles are now imbedded at their brain stems and SHIELD can program them. That was the kill point for me. I know SHIELD is a secret spy organization, but when a government feels like they can use people in anyway they see fit, it no longer has any heroic quality to it. A brief side note, I have a serious problem with our government killing civilians in countries we are not at war with via drones. Worse we have killed American citizens via drones, who may be horrible bastards, but a Presidential hit list is now no longer American or heroic to me. I don’t see how SHEILD can be ever looked as anything other then a totally corrupt organization. If it believes that it has the right to do things to its citizens for any reason they justify then they are now the bad guys.

The implanting of these nanoparticles is also a wonderful “deus ex machina” device that allows Spencer to do almost anything with these characters. When they are captured their memories are blanked out and they remember nothing. After the missions they will think they had just been exercising or off on a vacation or whatever. It begs the whole question of what is their identity or better yet how they are any different from Weapon X. Can they be programmed to kill anyone SHIELD wants them too?  Plus during the mission the new Nick Fury (his unknown black son) is a field operative and he shoots Hawkeye and leaves him to be captured. I guess a field test for the nanoparticles as the bad guys’ torture him with everything you can think off plus a demonic entity. The particles pass the test as Hawkeye has no memory of any mission and can’t tell the bad guys anything. I guess he has no memory of being f**ked by SHIELD either.

How is this book about heroes? When is doing what we call the right thing carte blanche to do anything? If you have that type of nanoparticle tech that can be injected into anyone without them knowing why are you not just injecting it into the bad guys? Of course you aren’t doing that because you have no story. It is a device that allows anything to be done.