This one will be a little short. I know I can talk about something until no one wants to hear another word about it. Ask my family about my complaints about Drone warfare and how we are building the next generation of people to hate us. Still DC was my former love and having been rejected I still can’t quite get over it.

I also have to publicly apologize to Shawn as we were working on a post about how to fix DC and I have not been able to pull that post together. DC has become a quickly moving target and I fear that we are so far into the new DCU that it may be something that is beyond repair – absent blowing the mutherfu whole thing up.

Anyway I wanted to give some quick thoughts on six DC 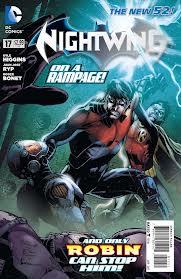 First up is Nightwing #17 by Kyle Higgins and Juan Jose Ryp. I have to thank them for saving me $3 a month going forward. This is the last issue of the book I’m getting. We are a year and half into the book and already doing a reset. The entire Dick Grayson fortune is gone, the circus is gone, his relationship with Sonia is gone and it is all because of the Joker. What the hell, I was trying to get into this new status quo for Nightwing and now the whole thing is erased. Dick is angry and he takes it out on some bad guys and Damian is the voice of reason that pulls him back. The part with Damian harkens back to when they were Batman and Robin and I enjoyed that but otherwise Nightwing is too far removed from who he was for me to care. On top of that the new status quo that had just been meticulous set up was blown up, I guess now I’m suppose to get behind the new one, no thanks. It is one thing when I’m not following a book to try out a new direction it is another when I was following the book. Nightwing in Chicago is a dumb idea and is also against the grand tradition of DC having imaginary cities for most of their heroes.

Next up is Justice League #17. Aquaman looks like he is around 20, half the characters are familiar and unfamiliar due to the new DCU. It is just too much. Finally at the end Aquaman is taking over being King of Atlantis again and I’m guessing he will quit the JL. I will give the book this much, it is finally starting to feel like a Justice League book. The characters are more of a team and the menace needs this level of power to win against it. 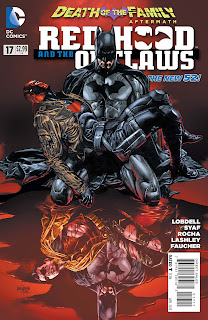 Red Hood and the Outlaws #17 is horrible. At the end Jason Todd puts his helmet back on without checking it out. It was booby trapped and has done something to Jason which will have some long term impact. The Joker had the damn thing for awhile, how stupid is Jason and Batman to not have checked it out. Also there are references to Dick and Starfire’s relationship. When the hell could that have occurred in the new DCU? They never meet in the Teen Titans because the Teen Titans with Dick never existed. We see a flashback of Jason as a young boy in the mansion. So how long has this new younger Bruce been Batman? Was Dick Robin for a minute? Oh wait Tim Drake was never Robin, but then when was he ever working with Batman? So then how long has Damian been Robin? How long was Dick playing Batman? When did Dick and Babs get together? Did they get together? Do I know any of these characters? The entire book is actually crap with Arsenal being a flawed creation in the new DCU as well as Starfire and Red Hood. It is often very apparent that the planning that went into the new DCU was minimal and half assed. 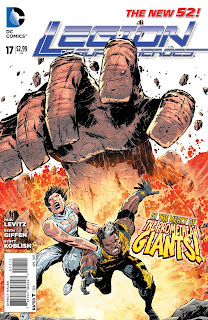 Legion of Super Heroes #17 was a welcome back Keith Giffen issue. The book was a lot of fun. Who the hell is this iteration of the LOSH, I don’t know and didn’t care. Iit was a cool start to this story. I can’t wait for the next issue. Wait, what – Giffen is off the book after one more issue and no story is out there why. This is a true WTF at DC.

Green Lantern and Green Lantern Corps #17 was the worse of reminding me about all the history that I no longer know, especially GL Corps #17. It hinted at all the possible histories of the characters and let me know once again I have no clue what I’m reading about when I read DC comics.

How do I hate thee, I hate that you pretend to be someone that I knew but in fact you are a stranger wearing the skin of my friend. Even worse you tease me with glimpses of what was and then show me that it can never be that again.

Ah well, we will always have those great stories in collections that I own and one day maybe I can love a little bit of the new you.