The Li'l Depressed Boy: She is Staggering

Sales.  They are the best way to get me trying some new reading.  This would be one of those times.

I've seen ads for The Li'l Depressed Boy in the various Image books I read monthly but hadn't sought out this series until this first trade was on sale.  I know nothing of writer S. Steven Struble and only know Sina Grace as the smart mouthed editor of the Kirkman titles I read.  He's moved on from that gig now, hitting more of the creative side of things again.

That's good because Grace is a good artist.  As you no doubt note, the star of this show is depicted a bit differently from the rest of the cast.  While everyone else looks human, in a stylized sort of way, LDB, as he's called by pretty much everyone, is a sort of formless.  This depection reflects his view of himself, I presume.  It's never explicit in the book.  It's a nice artistic choice, no doubt shaped by both creators, but it limits the expressive range of LDB.  Granted, he's depressed so his expressions tend to be limited anyway, but Grace does a nice job with those moments when other feelings are required.  Of course, he does well with the more human characters who have a greater range available, too. 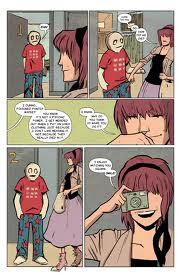 So, story.  There's not a lot of that.  In fact, this is probably a book best read in trade form, if not something even longer.  In single issues I'd probably wonder when this was going anywhere.  Read together, this collection of issues 1-4 tells an arc.  I must say, it's deceptive, because there aren't many four issue arcs these days.  The damn things seem to go on for at least six issues now, with the exception of some titles like Northlanders or Fables that put in one or two issue stories on occasion.

This arc relates how LDB meets a girl and falls in like.  He takes a good while, and several meetings, to even figure out her name.  Once he gets past that and hangs out with her a bit, falling more toward love, it all comes crashing down when he discovers she has a boyfriend.  It's all very small scale story, delving into the people rather than big events. 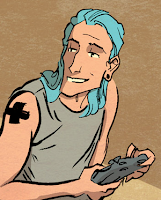 I liked this book and will check out some additional trades.  I need to find some small scale books that aren't overwhelmed by sad little lives, though.  There have to be some happy little lives out there.  Hell, I have one.

In addition to the four issues collected there are some extras, such as pin-ups and cut-outs.  I particularly liked the pin-up that referenced Say Anything.  That story had some happy little lives, too.  Well, mostly happy.
Posted by Thomm at Thursday, February 14, 2013