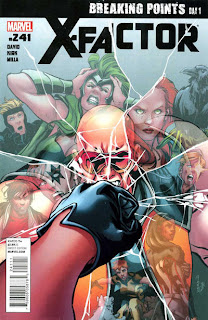 It should come as no surprise that there was another heated discussion behind the scenes here at Comicsand. It was the usual state of comics and the need for change in characters. The details aren’t important but I came to conclusion that's what I hate about superheroes; I get older, they stay the same age.

So how did I come to this conclusion? It started when I read X-Factor 241 -246, which comprised the ‘Breaking Points’ storyline.  I realized that while there was nothing wrong with the story, there really wasn't anything really new either.

Was it good? Yeah, for the most part it was. Peter David needed to reset the team so it’s a 5 issue arc kicking out the deadwood and streamlining the membership. Did I enjoy it? Eh, not really. Why? It starts with Peter David. I’ve been reading Peter David for over 25 years now. I know the cadence of his dialogue and the rhythm of his storylines. I know the tics of his plotting and characterization.  It’s like putting on an old pair of underwear. It’s still snug in all the right places and just loose enough in the areas that need it. But, at the end of the day, it's still an old pair of underwear. I felt I could replace Havok with Captain Marvel, or the Hulk, or Aquaman and it would be the same story. 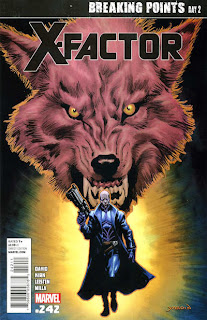 Past the writing, I realized these are the exact same characters from 20 years ago going through the same motions.  Sure there are some changes, but I am not sure they were for the better, nor could I tell you why they happened.

In X-Factor #241, Strong Guy gets the boot. Apparently he’s no longer happy go lucky guy. Now he’s moody and depressed guy because he sold his soul. When? Couldn’t tell ya. Why? Couldn’t tell ya. The book neither explained it, nor gave me a hint as to where to go look to find the answer. Honestly, I liked old Strong Guy better. There's enough grim and gritty in the real world, I really don't need yet another hero acting that way.  And then the villains were just alternate universe versions of the core characters. I know creators don’t like to give up intellectual property but this is the best they got?  So, I had character growth which was good, but in a direction I didn't like and I had villains that were only sorta new.

In X-Factor #242, Rahne gets the boot. Apparently she’s had a baby and Darwin tries to kill him. It was well executed but since we’re writing characters out it’s really hard to care. Not to mention, it appears to be variation #247 of Days of Future Past.


In X-Factor #243, no one gets the boot but we set the stage for Havok to go. Polaris learns she may have been responsible for killing her parents, freaks out, and starts the break up of the Havok/Polaris relationship.  I’ve been reading about their relationship for 25 years now, it's great their breaking up.  This feels like a change.  The problem is that I don't have a great deal of love for either character.  Nothing wrong with them but nothing all that exciting either.  It's another fine issue. 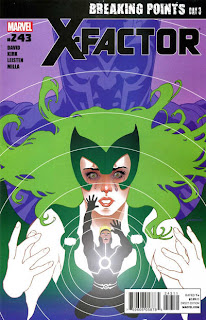 In X-Factor #244, Banshee gets the boot. Something occurred and she made some sacrifice that was supposed to save someone I guess. I mean this was supposed to be M-A-J-O-R. Now, here’s my snit about continuity, I have no idea the importance of what she did because David offered no explanation and the event was mired in continuity. Who was the villainess? Couldn’t tell ya. What was the big deal? Couldn’t tell ya. The book neither explained it, nor gave me a hint as to where to go look.  Honestly, unless you've been reading the last 5+ years of X-Factor, this issue was a waste of time.

Finally, X-Factor #245, the final team members leave, old ones return and.... I felt a great big nothing.

Granted, this probably wasn't the place to start reading X-Factor after a long hiatus.  I have to say that all the issues were well executed in terms of art and story.

But, this story didn't feel any different than Peter David's X-Factor issue #71 from October 1991.  It was the same characters.  It was the same team.  The only thing that changed were the villains... and they weren't even new villains!  If I were to say, in over 20 years, the only thing that changed were the costumes and the haircuts.
As a critic, I would say the storyline was fine and it achieved the desired task, reseting the team.  As a long time fanboy, I gotta say I wasn't thrilled.
Posted by Lee at Wednesday, February 06, 2013

Email ThisBlogThis!Share to TwitterShare to FacebookShare to Pinterest
Labels: Rant