It’s Groundhog’s Day and I had a special Covers post all queued up for you today to celebrate the holiday and to mark the beginning of my fourth year with Comics And.  Well, you may see it next week or next year, but I could not let a week go by without talking about this book.  It was AWESOME and it’s bound to cause a number of people (Shawn) some indigestion as they eat their unkind words toward the Superior Spider-Man storyline.  As always, there will be SPOILERS! 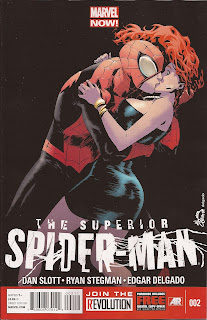 
WOW!  This book was FANTASTIC, INCREDIBLE, AMAZING, SPECTACULAR, SENSATIONAL, and certainly SUPERIOR to the previous issue!  Peter Parker is back – maybe not with the Thwips, but definitely with the quips – as he hangs around (literally) Potto® Parker, shadowing his every move.  In the previous issue we only saw Peter on the last page as he managed to stop Potto® from killing Boomerang.  Well, there’s no such sporadic/mysterious appearance this time, because if you see Potto® you see Peter in every panel.  The dialogue is perfect and funny as Peter responds to Potto’s® actions.

And what exactly is the Superior Spider-Man up to?  Well, wooing Mary Jane to bed is top on his list.  This was the very thing that was creeping so many people out, causing some to reject the title completely based solely on the fear that Marvel would have an imposter have sex with MJ, betraying her trust.  Hey, I can understand the concern after what they did to Gwen Stacy, revealing a tawdry affair with Norman Osborn (Wait!  That. Never. Happened. IMHO).  Well, have no fear fearless readers (that’s what “fearless” means don’t you know), everything is copasetic between the two.  Oh, but the journey to get there was priceless as Potto® scientifically tries to win her affection through a series of dating trials.  Now, there was one creepy aspect.  After several frustrating nights of receiving only a peck on the cheek, Potto® learns he can simply relive Peter’s memory of MJ and fantasize with her.  There goes his sexual tension and a good way to a restful night’s sleep.

He finally realizes that being “Peter” is not enough for MJ – she needs that exciting Spider-Man element, so he plans to web-swing her in a “dangerous” situation to provide that rush of adrenaline.  And it works.  BUT he stops her and gives one of the best explanations to Pete and MJ’s chronic problems.

So, he lets her go and moves on.  Needless to say Peter is mightily impressed.
Oh, did I mention that Carlie is staying with MJ (They are BFF now), since she got injured by Doc Ock. She didn’t forget that he told her about the mind switch, something that Potto® is unaware of, and she’s pulling all the clues together.  It’s only a matter of time.

And that’s the genius of Slott’s story.  You can see things coming, like Peter’s return, and he rewards you quickly, confirming your ideas (that he planted).  But he also pulls some logical twists (like the immediate breakup with MJ) that you don’t expect, which makes for some very entertaining comics!  The art also continues to be excellent and the problems I had last time, didn’t bother me this time.

GRADE A+: SUPERIOR to the first issue and Slott’s ENTIRE run of Amazing Spider-Man since BIG TIME!  Slott gives you the expected and unexpected at the same time and the mixture is pure magic!  This is the best story focusing on Peter and MJ’s relationship that I have read in many, many years.
Posted by Matthew at Saturday, February 02, 2013