Well, my emergency post was very much needed last week as we were without internet for most of the day last Friday during the carpet install for our new and improved study.  I finally got around to populating the bookshelves with all sorts of goodies this past Monday – the Captain America tribute shelf is very cool.  When all the work is done, maybe I’ll share some pics (Sorry, no Dagwood couch).  The glass desk is amazing and this is the first opportunity to test it out for blogging.  I like the window seat, but my arms aren’t quite in the proper “position”. 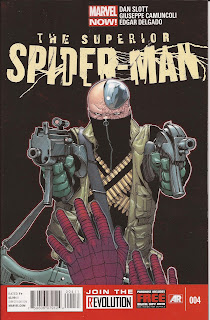 It’s ironic that my LCS cited issue #004 of Superior Spider-Man as one of the standouts for the week, ranking it behind #002, which I gave an A+.  I wouldn’t go that far (and you can see my ranking at the end), but I did enjoy it a lot and the book left me very interested in what would come next. SPOILERS Follow.

If I get ambitious, I just might squeeze some comments on another book or two down below the break.  It was a really good week for comics and I still have four titles left to read.


The first thing I do when I get home on Wednesdays now is to list my digital comic codes up on eBay for a one day duration (figuring people will want to read them as soon as possible).  The whole process is made easier by simply relisting a previous item with 99% of the same details.  So, I was very surprised to discover that I needed to edit my listing to remove Ryan Stegman from the item description.  I mean we’re only on the fourth issue and already we need a fill-in?!  Oh well, I’ve gotten used to Giuseppe’s pencils.  Although, I’m not sure I’ve ever seen John Dell ink his work.  It sort of diminished Camuncoli’s style a bit, while at the same time making it look less sketchy.  It was nice to have the consistency of Delgado’s colors – the “white” highlights really stand out.

The story was definitely more focused on Potto® outside the costume this time around.  He’s been busy efficiently capturing criminals thanks to the 8000 spider-bots that give him intel throughout the city.  Last issue he has his own Spider-Signal and this time the crooks are starting to respect him like they would Batman – this is a direct result of the severe beatings he’s handed out to Boomerang and the Vulture.  This makes his crime-fighting life easier, giving him more time to devote to his Aunt May.  She was injured recently and the doctor’s say she’ll now have to walk with a cane.  Her physical therapist is Sha Shan (Flash Thompson’s ex-wife) and I can’t remember when I’d last seen that character.

Potto® is not about to let that “dear old woman” and his former fiancé remain hobbled for the rest of her life.  So, he speeds off to Horizon to invent something to help her.  When he’s finished he demands the presence of Max Modell, bypassing company procedures.  His arrogance is at an all-time high as he shows off the crudest leg brace you’ve ever seen -- crude except for the part that would attach to someone’s spine!  The best part was when he declared that he was a doctor.  Max reprimands him for inflating his credentials. Potto® is stunned when he accesses “his” memories:

Rather than tolerate living without his “well-earned title”, Potto® immediately enlists at Empire State University – thanks to a generous donation – partway through the semester.  The good part is the young girls think he’s hot (Peter’s “ghost” has a great comment on that); the bad part is that his professor is an imbecile who he used to be in class with years ago.  Potto® can’t resist insulting the guy when they meet – he’s at an “11” for being a jerk this issue and is sure to alienate everyone soon.  I certainly wasn’t expecting Potto® to go back to school.  Boy, if Peter waits long enough to come back, he’ll have earned a doctorate without even having to defend.  Of course, he’ll be fired from the Avengers and Horizon by then and will have lost MJ, but you can’t have everything.

The rest of the book is concentrated on Massacre’s escape from Arkham Ravencroft and his trip to a fast food joint.  Long time readers (like 20 years ago Spectacular Spider-Man readers) will recognize the institution and the lady who runs it, Dr. Ashley Kafka (a J. M. Dematteis creation), who again I haven’t seen is a very, very long time.  She was always an interesting character.  So, I was glad to see her.  I wasn’t happy that she was brutally murdered right away.  Massacre needed her eye to unlock the door, so he plucked it out.  “He’s incapable of assigning any value to human life.”  (Hmmm, thinking about “life” reminds me of the 10th song off of ApologetiX’s new Hot Potato Soup CD, which is AWESOME by the way.  I better quit while I can.  We can’t all be as free to speak our minds as the future President [2016], Dr. Ben Carson can.)

Later, Massacre ends up at Burger Town in Westchester for a snack.  Anything has got to be better than the institutional cafeteria, right?  Unfortunately, they don’t carry Mocha Cola, just Phizzy.  The pimply-faced kid behind the counter makes the fatal mistake and hits the silent alarm.  Massacre dispassionately addresses the patrons:

If only he’d had a background check when he went to purchase his semi-automatic weapon – Wait!  He didn’t buy it; he took it from the guard he murdered.  The guy’s a certifiable nut and should have gotten the death penalty already, but wait again; maybe that’s not an option in New York anymore.  Sheesh, I sure don’t want to weigh in on that minefield here.

Massacre obliterates everyone in the restaurant, except a woman and her child, who he takes hostage so he can get them to drive him to Times Square.  Potto® is ticked and desperate to locate this loon, even enlisting the help of Uatu (the boy genius, not the guy on the moon).  Then we get to the last page.  The mini-Vultures are complaining about the Spider-Bots, when someone smashes one before their eyes.  It’s someone you all know and love – the Green Goblin!  I figure ol’ Gobby is still Norman Osborn, but I’m not sure I understand who Norman is anymore and I certainly haven’t seen him in costume for ages (that’s three for three for surprise guest appearances.)  Wow, what’s going to happen now?  Have we EVER seen Doc Ock versus the Green Goblin – that’s going to be GREAT!

It’s funny, in my review of #003, I ended up downgrading it when I finished the review, but this time I’ve got to upgrade it a bit.

GRADE B+:  Dan Slott has crafted a “tastier” Spider-Man.  Even when it seems that the momentum is lessening, the story is still going full steam and heading for uncharted territory. 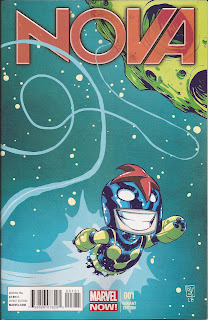 No time to comment on anything else other than to say that I really, really liked NOVA #001.  It was much better than I was expecting, plus it ties into Guardians, so you just might want to check it out.
Posted by Matthew at Saturday, February 23, 2013