The second half of the review will focus on DC and Marvel, with DC dominating what I read this week. There were some good books, but in general I felt the week was just okay. 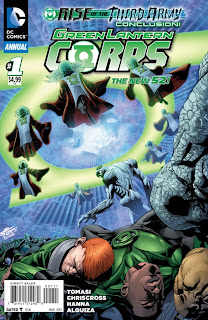 Green Lantern Corps Annual #1 by Peter Tomasi and Chriscross on pencils was decent. It wrapped up the Rise of the Third Army and pits the Lanterns against the Guardians. We see the return of Mogo, we see Baz and the chipmunk go into the black lantern book to find Hal and Sinestro and we see the release of the mysterious first lantern. I’m bored. The story is decent, the art is very good, it pulls together a lot of the plots but this story, like so many DC books, has been going on forever. It was not an ending, it was the end of the first part of this overly long epic tale. Next we have the Wrath of the First Lantern and then we will have part 3, where my guess is the heretofore unknown second set of Guardians will take over and run the corps in less of a dictator fashion. I can’t believe how much talent and months and months of issues are being used to never get to the point of a story.

Superior Spider-Man #2 by Dan Slott and Ryan Stegman was a decent issue. Matthew’s review makes me more excited about the book then when I actually read it. So instead of me talking about it; read his review here. 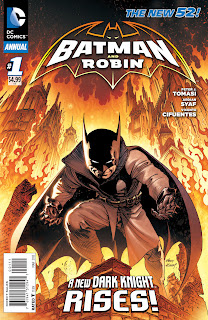 For my money the best story of this week was Batman and Robin Annual #1 by Peter Tomasi, Adrain Syaf and Vincent Cifuentes. Tomasi is an excellent writer and while I’m not always wowed by his work his writing is always well done. This book was an example of some of his best. Batman and Robin is a Robin centric book and Peter has used the book to tell the story of a developing relationship between a father and his son. While Grant is also doing some of that same work Peter’s is the core of the story and in Grant’s it is one subplot amongst many story elements. This issue Damian dupes Bruce to take a vacation and go on a scavenger hunt. The hunt is actually bits and pieces of Bruce’s past that he was too young to remember or it is just about Bruce’s parents. Damian in the meantime dresses as a pint sized Batman and patrols and protects Gotham while Bruce is away. It is a sentimental issue and shows Damian caring about Bruce. It also shows while Bruce is a little upset with being duped he caught on very early and trusted Damian to do the right thing. Having never had a son I assume the bond is different between father and son, then it is with father and daughter, but it rings very true as I was reading it. Damian is still a hard edged dangerous person, but we are starting to see that this might be a great Batman and Robin team.


Flash #16 by Francis Manapul and Brian Buccellato is my torture book. I keep dropping it and then getting it again. I have no clue why I keep doing this. As with many DC titles the over long story seems to be coming to a conclusion. At times the book is a decent read and at other times I feel totally disconnected to this version of the Flash.

Batman Inc. by Grant Morrison and Chris Burnham is another overly long story, but Grant is actually doing it right. Grant does such great work with Batman and even here he is still moving the Batman story forward. Burnham is a hell of an artist; my one quibble is he draws Damian way too small. Even if Damian is only ten he should be about 4 feet tall. Based on his height next to Alfred he is about 3 feet tall and must be five years old or Alfred is eight feet tall. I love Burnham art to death, but Robin being this small is a problem. Many, many artists have a hard time drawing children. The overall story is the fight between Talia and Bruce with Damian caught in the middle is great stuff. Depending on its ending it may go down as one of the great Batman stories. Heck Grant has already done more to make Batman better than anyone in decades. It is a shame the New 52 hurt so much of what he had done.

Teen Titans #16 is a “Death of the Family” tie-in. Memo to self: Jim please stop committing to buying all the tie-ins for any story of this nature. You would have enjoyed it more without reading the ancillary crap. Bottom line save your money.

Hawkeye #7 by Matt Fraction and art by Steve Leiber and Jesse Hamm was an issue dedicated the survivors of Sandy. The art by Hamm was less than stellar; the story was rushed and rather trite. I applaud the sentiment, hated the issue. 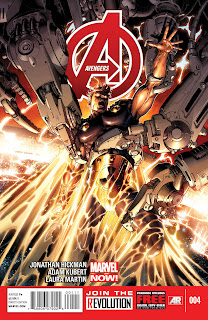 Avengers #4 by Jonathan Hickman and Adam Kubert looked great, had some wild concepts and ideas and proved that anyone who thought issue #3 was the end of the story was wrong. This will be a typical Jonathan Hickman two to three year story. I gave up on his FF run and then got back into it. It was a good story, it just took too long. After that story was over I did drop the book with no regrets. I want to sign on for Avengers stuff but I just know it means waiting three years to get to the point. Do I stay monthly or buy trade? I’m a monthly guy so I guess I onboard for the first year at least.

And to end the week we have Batman The Dark Knight #16 by Greg Huwitz and Ethan Van Sciver. It was very good and the first issue in what looks to be a Batman versus Mad Hatter story. It is the one Bat book that is pure Batman at this point and appears to have no allegiance to being tied too tightly to continuity. Plus it has Van Sciver art, which is always heavily detailed and flat out gorgeous. My big concern is how long can he deliver on a monthly book before it all falls apart?

That wraps up the last week of January, come back next week to see what the start of February brings.
Posted by Jim at Tuesday, February 05, 2013