Again I have to apologize if the week is weak as having a cold or whatever has sapped my energy to low levels. So this part is just some quick blurbs on everything else I read. It is a hodgepodge selection of books as I was almost reading books in a truly random fashion. 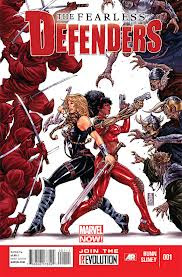 First up is Fearless Defenders #1 by Collen Bunn and Will Sliney. Let’s see, Misty Knight on a ship beating up some bad guys and she gets a mystical artifact and takes it back to female archeologist. Why the archeologist sent Misty for this and other plot points are lost. Dr. Annabelle Riggs turns on artifact, it raises dead Vikings, Valkyrie shows up and a battle ensues. A little girl on girl kissing, battle ends and I have no clue what is going on and no clue why I care and no desire to buy the second issue.

Guarding The Globe #6 was supposed to be an unlimited series by Phil Hester and Todd Nauck, instead it also dies after six issues (like the mini-series). It is being rebranded as Invincible Universe. I don’t know I sort of enjoy the book; sort of never know who is who, not sure where I’m going with this book. If the new series, The Invincible Universe is a different type of focus, like highlighting people who are not the focus in Invincible it might be a series to try. If it is more Guardians of the Globe then time to give up on it.

Superior Spider-Man #3 by Dan Slott and Ryan Stegman is actually pretty lame in my view. The book is written with convenient contrivances like Potto Parker being upset over the Vulture using children. We are supposed to believe a mass murder on Potto’s scale has some scruples. And Jiminy Cricket  Peter Parker’s ghost is just flat out annoying. I was almost ready to drop the book but Matthew’srave review and enthusiasm for book has me signing up for a couple more issues. 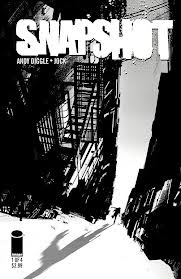 Snapshot #1 (of 4) by Andy Diggle and Jock was a great first issue of this mini-series. It was a linear story full and twist and turns and a neat shock ending. It is essentially a murder mystery and starts with the central character finding a smart phone in the park. He discovers pictures of a dead man on the phone. Someone comes to the shop where he works and is trying to kill him, we assume to get the phone. He goes to the police the dead man shows up. It gets more elaborate from there. All in all it was a great start to this series.

Think Tank #5 was an excellent issue by Matt Hawkins and Rahsan Ekedal. Matt’s stories are so inventive and so much fun. My favorite part is all that I learn from what Matt writes as he provides back material talking about the science in the book. Then I go look up DARPA and other things and learn even more. I’m not a big fan of the art. Rahsan does a good job telling the story for the most part but his draftsmanship and figures leave something to be desired. I hate to be negative in anyway because I think this is a great series and everyone should try it out. 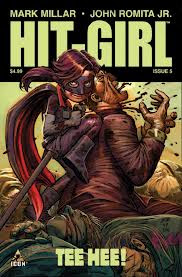 Next up is Hit Girl #5 (of 5) by Mark Millar and John Romita Jr. Tom Palmer does the finishes and what is called the ink wash. Palmer’s finishes makes the art. Romita Jr. needs Palmer on all his stuff, it looks great with Palmer. The story is just out and out insanity and brutal killing and mass amounts of gore being done by a little girl. Where are Congress and Wertham to investigate the horror? All kidding aside this type of book pushes the envelope of what people would consider to be objectionable or not. As a pure exercise in cartoon violence this book is very funny. If I could time travel I would drop this on the desk of the Congressional investigative committee in the 1950s.

All New X-Men #7 by Brian Bendis and David Marquez was another good issue. What is amazing is that nothing much happens in each issue but the characterization and the emotions of the characters resonate so well. It helps that I’m familiar with the characters histories and all the issues around them so when Scott hands Jean a copy of the wedding announcement the impact and feelings she has make sense.

Harbinger #0 by Joshua Dysart and Mico Suayan was a nice job of showing what Harda is doing today and giving us a flashback talking about Harda’s origin. It actually focused a lot more on Harda controlling a young powerful Harbinger but the origin story was enough to fill in the blanks on Harda. Valiant is producing quality entertainment in all of their books and right now appears to be building a solid core of books before expanding.

Last is Garth Ennis’ Red Team by, well you know and Craig Cermax. Garth uses the device of a man being interviewed as he tells the story of the Red Team then the flashback ensues. It would be easy to think that Garth is making the entire series a flashback, which implies it needs to be a limited series. What Garth is careful about is we never see who is interviewing the character which leaves it open. The Red Team is an elite group of police who decide to execute the bad guys who remain beyond the reach of the law. In their first try at it, it goes perfectly. That apparently emboldens them to do even more as we should see in issues to come. I have to say that Dynamite is starting to produce more and more books that I’m willing to buy and this is a series I want to follow.

That wraps up the week, I have a ton more to read, maybe I’ll post some comments on other books later or I have been contemplating restarting the twitter account to send out brief blurbs on a book. Anyway that is a wrap see you all next week.
Posted by Jim at Tuesday, February 12, 2013