Ok, if you want happy, go read today's earlier post.  But there are some things that are just so ridiculous I have to say something.  I am an art guy, so when the art goes bad it ruins the story.  IMO, good art can save a bad story whereas good writing cannot save bad art.

That said, there were a couple of moments in comics that made me want to bang my head against a brick wall they were so bad.

You've been warned!   See what I am talking about below the break.


Let's start with Matt Fraction/Mike Allred's FF#2..
Overall, it's a good superhero comic.  I am not sure I like the New Mutants... ummm I mean Great Lakes Fantastic Four but it's a competent tale.  My problem comes from the huge gaps in logic. 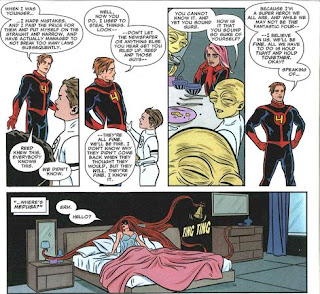 Image #1
So, we have some blah blah conversation and everyone heads off to bed.  Nothing great but it does show us that even superheroes are people too.  In a funny twist, Medusa, queen of the inhumans, rings a bell for maid service.  I liked the little touch.

But, you expect to believe she sleeps in her mask???  Really?  If this were 1960 I would buy it, but these days?  It just seems stupid. 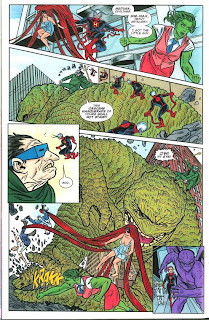 Image #2
But, just to show it wasn't a fluke, we get more stupid!  Because when the Mole Man attacks, Medusa leaps out her widow to defeat the bad guy!  And she's still wearing her mask.

Just to make sure we are over the top stupid, she wears her mask and a sheer nighty to go fight the giant monster.  She doesn't want anyone to see her face without make-up but seeing her t*ts is just fine.  Just have her fight naked already, that's what Bombqueen does.

And, don't even get me started on the fact that Antman is using Orion's flying harness!  DC should sue. 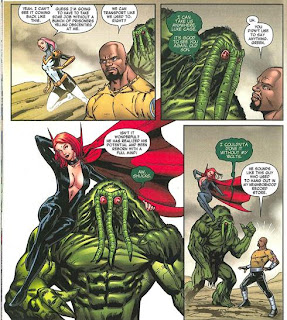 Image #3
From Dark Avengers 183, this made me want to burn the book.  Man-Thing speaks!  Maybe he's a skrull or something but until it gets explained this is a whole new level of stupid.  Apparently Marvel never understood the concept of the character because this isn't growth... it's.. it's... I don't know what it is but it's gosh darn bad.

And one of his dialogue boxes... "Aw shucks." 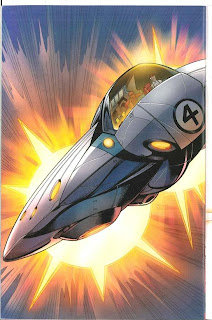 Image #4
What's wrong with this page?  Nothing, it's a well drawn spaceship.  What's right about it?  NOTHING!  I can't see the characters.  There's no dialogue and when you are only getting 22 pages of story to start losing and entire page make you feel like you're getting screwed.  This is a waste of paper. 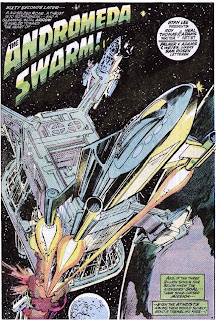 Just to point out how to do the spaceship scene right... check out this splash from Avengers #96, drawn by Neal Adams.  This is the EXACT same thing but this in a thousand times more interesting!  Why?  How about words.  LOOK MA der's dem fancy words on the page.  It makes the page more visually appealing.  How about some details!  Look there's a space station, a couple of planets, and even some gas from rockets red glare.  That's way better than a pair of spiked balls. 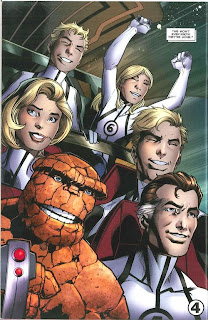 Image #5
Ending on a positive not, this splash is just fantastic!  It captures the essence of the FF and sums it up perfectly.  And, using it as an end page was a good idea.  It ends the issue and immediately sets the tone for the next issue.  So maybe it isn't all bad.


HEY LOOK!  They even managed to get words on this page.  Not many but it makes it perfect.


That's all I have the energy for right now.  Maybe more bad art next week.
Posted by Lee at Friday, February 08, 2013

Email ThisBlogThis!Share to TwitterShare to FacebookShare to Pinterest
Labels: Rant