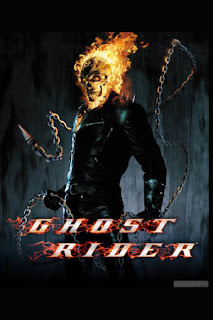 Last night my boyfriend took me to see the new Ghost Rider movie (as my Valentine's Day gift) at midnight. As much as I loved Ghost Rider as a kid I was worried going into the movie - this film had several problems along the way and even without those issues I had to be able to accept Nick Cage as Johnny Blaze and deal with the fact that Ghost Rider was going to have a hard time coming to screen regardless. Ghost Rider is NOT a story that I foresaw translating well to motion picture format. And honestly, it didn't.

But damn if I didn't really like the movie.

Let me explain... they changed the orgin story. They must have realized that Ghost Rider in it's original glory didn't work. I mean, sure, we can accept it for what it is in the comic books, but lets face it, it doesn't make for a good movie. They made the orgin story BETTER. I was shocked. And somehow Ghost Rider works very very well as a Western. Oh yeah, Virgil was there too! (from Tombstone)

They completely revamped Roxy - but yet again it worked for the film. She was a fantastic love interest and had a few good solo moments as well.

The special effects were so much fun. Watching Ghost Rider drive around on his bike was so frelling cool I felt like a little kid on Christmas morning. Then again, I'm also easily distracted by shiny things, but so what, it was nifty.

Now don't get me wrong - the movie certainly had some hokey moments and Ghost Rider's voice could have been better done. The bad guys were a bit cliche and there were one or two moments that made me cringe. But the bottom line was the movie was FUN. Fun with plot and character development. I walked away giddy and very pleased that they stayed true to the spirit of Johnny Blaze while still being able to try something new.

As for Uncle Nick, he did a good job. He still doesn't quite fit my mental image of Johnny Blaze, but he obviously loved the character enough to make it work for him. Major kudos to him for pulling this one off, I'm glad he asked Johnny Depp to stay away from the role. It all seemed to work out in the end :)

So if you're a comic book fan because you can sit back and enjoy a fun story you should go see this movie - you'll have a good time!
Posted by Gwen at Saturday, February 17, 2007