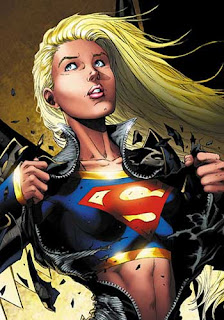 Okay, I know I said I'd do a post on the JSA... and I will. But I just finished reading Ibis the Invincible and found myself reading the DC Nation blurb by Eddie Berganza on the back page. Apparently one of Eddie's goals is to attract a female audience - specifically for Supergirl. All I could think was - you've got to be kidding me!

After reading this little blurb I think I've figured out why so many women don't read comic books. It's because of people like Eddie Berganza who think that the recent Supergirl books are just what women want in comic books.

I know I've discussed my personal views on why many women don't find mainstream comics appealing, but even the women who disagree with me on those points probably don't find themselves agreeing with Eddie. You see, after some serious discussion the Supergirl staff made some changes to try and better appeal to a female audience. They decided the best way to do this was by making Kara a "typical teenager which meant she wouldn't listen to grownups (in her case a guy named Kal), and wouldn't appreciate being given chores (killing Kal for her Dad Zor-el)." My personal feeling on this is, WTF? Honestly all I've seen them succeed in doing with Kara is making her a self-centered whiny kid. I mean, sure, I knew my share of valley girls in high school, and while I appreciate the idea of trying to do something different with Supergirl I'd much rather see the Kara who's been spending time with the Legion than someone who's coming way too close to making Paris Hilton one of her role models!

You know what I really think women want when they read a comic book? A good story. Eddie - Joe Kelly - just write a good story, stop spending so much time on trying to write a Supergirl book specifically geared toward women. If it's a good book the readers will be there behind it - male and female alike. Personally, I want to see Supergirl the hero, not some self centered teenager. If you guys really need a hint on how to write a comic with a female lead maybe you should go talk to Gail Simone over at Birds of Prey - I'm sure she can help you out.

Ibis the Invincible was awesome by the way. Apparently Tad Williams can also write a teenaged superhero. Maybe he has some tips too.

And by the way, Powerboy? Yeah, you may have made him into a grandstanding example of what women supposedly hate in female characters, but so far he may be the only thing saving this book.
Posted by Gwen at Sunday, February 04, 2007