And what a fine week it was. This week the house received another shipment from Amazon. And, as always, this was greeted with a mix of "yahoo" and "oi, here we go again." The mixed emotions were due primairly to the fact that there wasn't a single comic related book in the entire package. No fancy hardcovers of Sandman. No collections of the Fantastic Four. All the books were nothing but page after page after page of text.
Let me explain for the non-comic geeks reading this. You see, the comic book collector is considered one of the lowest members of society. From our youngest days we were called geeks and relegated to the uber-smart kid classes. As everyone knows, the geek stigma is hard enough to endure without the added whammy of comic book geek. In short, comic book collectors are the geeks of the geek world. School was bad enough but to survive the dating scene, many of us took our habits underground and hid them from girlfriends until we felt safe enough to share our obsession. This usually occured after we were married. Why did we hide our collecting habits? Well, I am sure Jim remembers as well as I, the cruel laughter when we offered that first really special girl a chance to read the NM+ copy of X-men 137, the moving conclusion to the Phoenix saga. Or, in Jim's case, Justice League of America 66, First appearance of Red Tornado, but the result was the same. It was a difficult lesson is "common folk" just don't get comic books.
Because we hid the collection from the future spouse until it was far to late for them to get away, they always believed that books without pictures were our favorite thing. Oh, how wrong they were! BUT, by waiting so long to share the obsession, we are open to the "Shouldn't you read a 'real book'" discussion. Sometimes it starts simple with the "when was the last time you read a book without pictures?" or if I've said something silly during the week I get "Isn't it time you read an adult book?"
So, when I opened the Amazon box and saw nothing but text books, I knew the snide comment was coming. Luckily, I keep the Amazon wish list filled with both picture and non picture books, to insure I at least get something I want. In this case, the speech never came but the intent was clear. To keep the peace in the house I am currently reading two new books.

The first is a collection of short stories called The Complete Stories of Robert Bloch Vol 1. For those that don't know, Robert Bloch has written many, many stories in all sorts of genres, but he is most notable as the author of Psycho. Yep, he wrote that famous little movie directed by Hitchcock. This collection focus's on his horror work with an emphasis on monsters, whether they be the monster under the bed, or from outer space, or you neighbor next door. I haven't read all of them yet but so far they are outstanding. All the stories were written between 1938 and 1956 and they are still as crisp and fresh today as I'm sure they were then. The thing that I like the most about the stories is the fact that the true horror of the situation is left to the readers imagination. By today's Friday the 13th slasher-gore standards, these stories are very tame. Don't get me wrong, the stories are scary but they aren't gruesome. BUT, it's refreshing that I am expected to understand and be horrorifed by the situation rather than be scared by a bucket a blood. 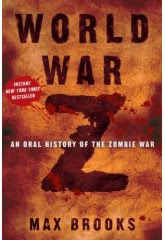 The second book was World War Z, An Oral History of the Zombie War by Max Brooks. WAIT. DID YOU HEAR THAT NOISE??? I distinctly thought I heard Jim groaning out loud when he read that last sentence. I'd bet a dollar he has already thought "I'm so frellin' sick of zombies". Actually, this is a very interesting post apocolyptic novel. I started it with some trepidation but I find I am really enjoying it. The story isn't so much a story but a narrative in the form of interviews. The interviewees are survivors of the 10 year Zombie war that occured after the dead first rose. I am finding this isn't so much a horror novel as a "how civilization collapsed" novel. There isn't a great deal of tension because, as an oral narrative, I know all the people in the book survive. They may come close to death but they won't die. I am still in the beginning of the book but the discussion is how the plague spread so quickly. How is got from one nation to another and how the outbreaks spread. Future chapters shall deal with the basic survival of society and how it is trying to rebuild itself. Again, as with the Bloch short stories, the book isn't scary as much as creepy. All the zombie movies have always dealt with the short term, "how does this small group of people survive", this book takes the next logical step to "what happens to society." It is very interesting indeed.
So, I got two very good books that I am enjoying. Meanwhile, my wife got a self help book called "The Secret." Would you like to know the secret to success? Would you? Well, because I am so nice, I shall tell you. It is: Be nice to people. Seriously, that's it. Oh yeah, and learn to listen. So be nice and listen to what people say and you shall succeed. What a collasal waste of money. Don't get me wrong, the book is correct. But, all the book did is take the old saying "You attract more flies with honey than vinegar" and wrap new words around it. This is such incredible common sense and the book is selling millions. Awful. Maybe I should write a book that says "Tell your wife you love her twice a day, once in the morning and once at night, ACTUALLY MEAN IT! and the chances of your marriage surviving increase 50%. All I have to do is figure out how to say that in three hundred pages and I could be a millionaire.
Posted by Lee at Wednesday, May 23, 2007