Lee: Thomm’s out this week so welcome back our own resident Statler, Jim.

Jim: What the hell, you are Waldorf them. Frigger fracking young whippersnapper. 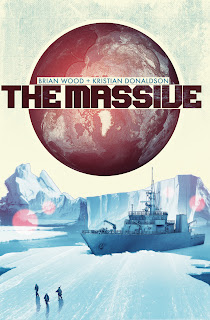 THE MASSIVE #1
Brian Wood (W/Cover), Kristian Donaldson (A/Cover), Dave Stewart (C), and Rafael Grampá (Variant cover)
FC, 32 pages, $3.50, Ongoing
In a post-war, post-crash, post-disaster, post-everything world, the environmental-action trawler Kapital scours the earth’s oceans for its mysteriously missing sister ship, The Massive. Captain Callum Israel, a man who has dedicated his life to the ocean, now must ask himself—as our planet dies—what it means to be an environmentalist after the world’s ended. Callum and his crew will come up against pirates, rebels, murderers, and thieves as they struggle to remain noble toward their cause. Can you save a planet that's already doomed?
Lee: I’m always up for a good post apocalyptic story. I can’t seem to get enough of them. And, with Wood writing it I am sure it will be good. This is an easy pickup.
Jim: Have to agree, seeing Brian Wood’s name on it and I’m always looking forward to end of the world stories, for some reason they usually make good reading. I wonder if Dinosaurs use to read post apocalypse stories. Oh wait need to get into character. When I was your age, the world was ending, but we fought the big one to save your assses.

4 more books below the break and not a one an obvious pick like this! 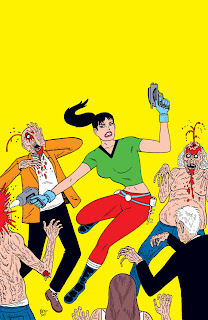 FATIMA: THE BLOOD SPINNERS #1 (of 4)
Gilbert Hernandez (W/A/Cover) and Peter Bagge (Variant cover)
b/w, 24 pages, $3.99, Miniseries
Comics luminary Gilbert Hernandez envisions his strangest, most thrilling future yet! A drug called “spin” offers the wildest trip imaginable, followed by its users’ inevitable, rapid deterioration into undead flesh eaters. Despite the side effect, the drug is so popular that the human population is dying out! With no cure to be found, the beautiful, lovesick Fatima may be the only thing standing between the survivors and the apocalypse. Get ready for four issues of zombies, drug lords, and gorgeous women!
Lee: I might be getting tired of zombies but I never get tired of Gilbert Hernandez. He is such a good writer/artist that I am sure this will be good.
Jim: If you are high, what is wrong with your hippy free love kids of today. Where is Robert Kangher and Joe Kubert when you need them. 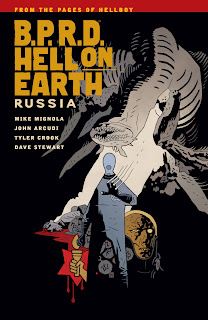 B.P.R.D. HELL ON EARTH VOLUME 3: RUSSIA TP
Mike Mignola (W/Cover), John Arcudi (W), Tyler Crook (A), Duncan Fegredo (A), and Dave Stewart (C)
FC, 160 pages, $19.99, TP, 7" x 10"
A graveyard of mutated horror is uncovered deep inside a Russian mine. With Liz still missing and Abe Sapien lying on his deathbed, the newly international B.P.R.D. sends Kate and Johann to meet the Russian equivalent of the Bureau—which readers first saw in B.P.R.D.: 1946—and face an exploding fungus monster at the Kremlin and a spreading contagion. Collects B.P.R.D. Hell on Earth: Russia #1-#5 and “B.P.R.D.: An Unmarked Grave” from Dark Horse Presents #8.
Lee: I shouldn’t I shouldn’t I shouldn’t… but I can’t help myself. HEY JIM! Look, even though you bought the single issues and didn’t get a conclusion… when I buy the trade I will! Isn’t that nice of the good people at DH?
Jim: Gosh darn shanking shifty publishing screwing me again. I guess when I get the hardcover a few years in the future I will be able to read it. My real point is that Dark Horse usually treats their audience better then this Marvel type grab at trying to make you read something other then what you are reading. Thomm just decided my hyperbole was a true reaction. It was more disappointment with Dark Horse then anger. 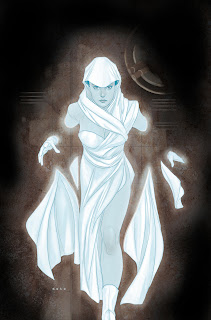 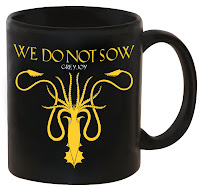 GAME OF THRONES
Game of Thrones Coffee Mug: Greyjoy. $12.99
Game of Thrones Embroidered Patch: Greyjoy, $4.99
Game of Thrones Embroidered Patch: Tully, $4.99
Game of Thrones Season 2 Coaster Set, $9.99
As HBO heads into season 2 of the award-winning television series Game of Thrones, we continue our line of products featuring the sigils of the various families. We offer two patches, a mug, and a coaster set, which includes four coasters with the sigils for Greyjoy, Tully, Arryn, and a new Baratheon sigil, as seen in season two.
Lee: Finally, good for DH for getting marketing rights to this. I am loving GoT and actually think the coffee cup would be cool at the office.
Jim: I have just been convinced by some other friends to get into this show and ordered Season 1 so if I enjoy it, maybe a coffee cup would be cool.

Jim: Dark Horse has become more of a niche player then ever before. IDW is almost out Dark Horsing Dark Horse. By that I mean they built there company model on Dark Horse’s business plan but now seem to have more exciting projects in general and produce the highest quality hard covers. I still love Dark Horse, but it just seems like they are not the name they once were.
Lee:  I would completely agree.  I love alot of what DH publishes for if it weren't for Star Wars and Buffy I'm not sure how long they would survive.  Oh well, I'm still enjoying the ride.
Posted by Lee at Thursday, April 05, 2012