The Weak in Review

I called it weak because I have so much to do this week-end and little time to get it all done. Plus I just got my comics this Friday and have so much real work stacking up again; I know I sound like a broken record, so I have reviewed what I read. On with the show, this is it, Oh monsieur light the lights, wrong opening. Nothing up my sleeve “Presto”, gotta get a new hat, still wrong opening. First person to guess where those two lines come from and send me an e-mail with a snail mail address and I will send you a trade paperback, really. I used to run contests all the time on this site back when I started the whole thing. Fellow Comic And writers are not eligible to win Matthew. 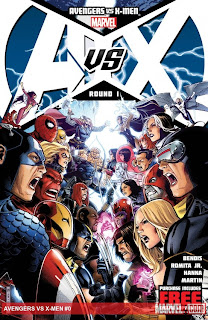 I picked up Avengers vs X-Men #1 and was wondering will it be crap or will it be good. The multiple writer approach has its plus and minuses, but one scripter makes it better.  The writers are all of the Marvel promoted big names Jason Aaron, Brian Michael Bendis, Ed Brubaker, Jonathan Hickman and Matt Fraction, the scripter Bendis, art by John Romita Jr and Scott Hanna (so nice to see him getting a huge book like this), with colors by Laura Martin. I’m actually not a fan of Romita Jr., but damn if he does not impress when he brings his “A” game and since he is not doing all the issues I’m happy with the art, it has big bold panels, great storytelling, solid emotions being registered. All is all the art is a solid B. Not an A because stylistically I think there are better artists out there, technically Jr. does a great job. The story itself was well done also. I remembered the DC series 52 was by a staff of writers and that was a solid series and this started out very well. It was a nice straight line story that the Phoenix force is headed to earth. The Avengers believe they should hold Hope to protect her and Earth. The X-Men believe that it is a mutant issue and they should protect Hope.  Cap and Cyclops face off and Cyclops shoot an eye blast at Cap and the stage is set. Bendis had some stupid dialogue moments here and there but all in all this was a great read with solid art. Instead of dreading the series, it now looks like it could be fun. They won me over for now. In some ways I feel like the eternal sucker for being drawn in and in other ways I look for the cape and cowl set to just be light entertainment and this fits that premise. By the way I will be publishing the digital comic codes on here and face book for every issue as I will never use them so if you get it first congrats. 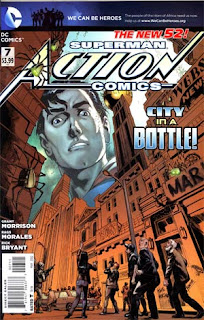 Next up I read Action Comics #6, 7 & 8. The main stories by Grant Morrison, whose work I both love and sometimes mutter about and we had art by Andy Kubert, Rags Morales and Brad Walker. Two issues had some back up stories, but Action suffers from a few problems. First off issues #5 & #6 were more of less a fill in issue to theoretically give Rags more time. Then issue #8 still was only a little bit of Rags. I love Rags Morales work and wish that they could just give him projects that he can work on until it is finished and then publish. From Black Condor to Identity Crisis to First Wave and to Action when he hits it; his work is some of the best work ever done in comics. He equally evokes Steve Ditko and Neal Adams for me and is often as dynamic as Jack Kirby. One day I want to own a page of work that he penciled and inked himself. Still in these three issues only one book was his pencils and the rest by other artists. The story itself suffers from me reading when I was slightly tired and having not read any of these stories for three months. Eight months to give us a sort of origin story for the new Superman was way too long and for me I started losing all the elements of what was going on. I don’t even want to talk about the whole two part story dropped in the middle of the origin story because I was almost totally lost due to the three month gap in reading. Comics and I have a rhythm and the long time I have had trying to catch up with many books has taken a toll. At least I’m still current with everything but the DCU. The monthly addiction works for me in following 75 to 100 plus story lines when I read monthly. I have a feeling that Action will read better collected. Not that most comics don’t, but Grant can be very hit and miss in how well he tells his stories as monthly comics feeding into the greater whole. Grant is a master story teller and often the individual chapters don’t always work. This time the entire story did not hold up 100% for me and the whole Superman costume is very unexplained and was too conveniently sitting around for Supes to grab. I would have enjoyed a lot more about Clark and his relationships as the snippets we got with his landlady and the editor of the Daily Star make Clark a cool character. I think what I like about Grant is that no matter how often he frustrates me he also sprinkles more great ideas in one comic then most writers do in a one year run. Grant’s stuff has some of the Lee/Kirby magic where the little ideas he throws in are often picked up by other writers and made into great stories. Heck he essentially fundamentally changed Batman more then he had been in the last 40 years. Of course the new DCU messed a lot of that up.
The other books I have managed to read before concluding this post were all Marvel books. In my effort to get caught up I find setting goals keeps me in line so since I had a fair number of new Marvel books I was hitting those books hard. 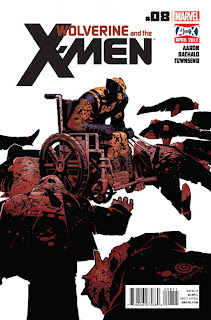 Wolverine and the X-Men #8 by Jason Aaron writer, Chris Bachalo pencils and colors and Tim Townsend on inks was another fine issue. This book is just pure fun, which I would have never credited Jason Aaron for being his strong suit. It is still amazing to me that DC let this guy move to Marvel, it was obvious from Scalped this guy is a talent. I swear DC should put Karen Berger in charge of everything at DC. Chris Bachalo’s art is much better then the other artist Nick Bradshaw, but his work at times is a little hard to follow. I was going to blame the heavy dark coloring, but he is the colorist also. All in all Bacholo and Townsend are one hell of a team, just not convinced super hero action is their best suit. The story itself has a ton of disparaged elements and Aaron manages to pull it off much better then he has in the past. As I was reading it I thought it was too much, by the end of the book it was a satisfying read. Jason managed to make it a good stand alone story of getting a cure for Wolverine’s broken legs and at the same time tell a solid side story of Hank versus the Hellfire club. 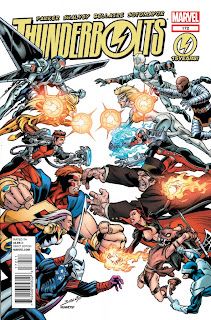 Thunderbolts #172 by Jeff Parker writer, DeClan Shavley artist is a series that works much better now that I’m current. I know what is happening and jumping into the current storyline with the Thunderbolts versus the Old Thunderbolts was smooth as silk. The future ramifications are already a major plot point and from the retro cover of the two groups facing off till the end where Moonstone tries to use this to her advantage the book flowed very well. Parker is an underrated talent from where I sit. Parker has shined with Agents of Atlas and now Thunderbolts. This guy needs to be writing higher end team books and just allowed to do what he wants to do. Hell I would love to see DC grab this guy and turn him lose on something like Justice League. I did miss Kev Walker’s work on this issue. Kev’s unique style gives this book a special flavor and while Declan’s work is professional it likes any real zest for me. This issue was the set up of the two groups facing off against each other and next issue promises to be a great one as the storyline of time traveling Thunderbolts races to its conclusion. 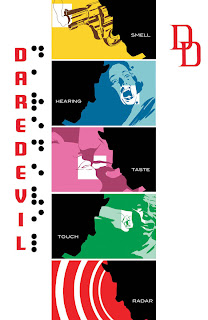 Next up is Daredevil 10.1 by Mark Waid writer and Khoi Pham on art. Daredevil is certainly well done and Waid deserves all the credit in the world as this feels like one of those definitive runs on a character and akin to perhaps Waid’s run on Wally West. The art was also good, yet the book was a little underwhelming. The whole point 1 thing is just a sham for putting out an extra issue of the book. Often these issues have no true bearing on the regular run, but at least Waid made this issue count towards the main story line he has been running. One thing is that I think it is a shame this book has such universal accolades. The reason is not because it is not a good book, but because it is a good comic. I think the book gets so many accolades because too much of what is out there is way too pedestrian. Another reason I believe this book gets the attention is Waid took Daredevil in another direction by making it more of a light hearted book then it has been in decades. As an industry we are so starved for change that only change is hailed as innovation. Again do not read this as a condemnation of Waid’s work on this book as I think it is very well done, but as a condemnation of the industry as a whole and our unwillingness to allow change to occur within our characters. To belabor the point even more when I started reading Spider-Man I was six years old and Peter Parker was in High School, I now have a grand child and one more on the way (congrats Gwen and Andre) and Spider-Man is about 26, unmarried and I don’t know what else as I don’t read his book.
See what happens when I try to comment on everything I read, it gets way too long. That will have be a wrap for this Monday. My April 11 list is a little too long but I did recently drop Superboy and Teen Titans and have more main stream stuff on my radar to drop. Heck often if you drop the Vertigo titles the main DCU stuff is equal to what I get from Marvel or the Indies. The list is 100 Bullets Volume 2, Northlanders, Saucer County, Unwritten, I, Vampire TP, Batgirl, Batman & Robin, Batman Inc. Deluxe HC, Batwoman, Demon Knights, Frankenstein Agent of Shade, Green Lantern, Resurrection Man, Shade, Suicide Squad, Avenging Spider-Man (cross-over caught me), Fantastic Four, New Avengers, Secret Avengers, Secret Service, Uncanny X-Men, Winter Solider, America’s Got Powers, Saga, Secret, Thief of Thieves, Alabaster Wolves, Conan, Lobster Johnson, Cobra, Smoke and Mirrors and Lord of the Jungle.
Hope to see everyone back in another week, thanks for dropping by.
Posted by Jim at Monday, April 09, 2012