Printed Comic Books Are Not a Viable Business and Goon #39 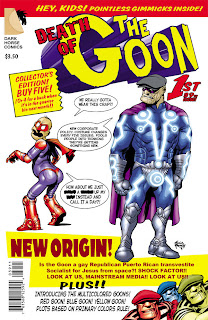 So I keep telling Lee that my interest in the blog is waning and he says that has been true for a couple of years. I agree with him but one of the problems I also have is often I can bore myself. I have a clear opinion on comics and have made that viewpoint known over and over and over again. The capes bore me as we have no true advancement of the characters. Lee pointed out I want endings and he is again correct. Finally Lee said that I should just do the rants on this blog. Why Comic Books Suck was going to be that blog, but I was too ambitious and cannot generate enough bile and time to keep up that blog and write here. So this week’s column is Lee’s fault.

Lee was right about a few things, shocking, but lighting statistically speaking can strike the same place more then once regardless of the saying. This week brought along a minor revelation in the from of Goon #39 which lays out what is wrong with DC and Marvel and does so in an entertaining manner. Eric Powell’s column at the end of the book should be required reading and I will post it here for your edification.

I will piggy back on what Eric is saying and his viewpoint has more credibility as he is an industry insider, but one other revelation struck me. I have talked and others have talked about the end of comic books and I realized it has already happened. The printed comic book business is dead. Just as vinyl records are dead. On a 60 Minutes report they talked about the comeback of vinyl records. They said there used to be 75 record company presses and today only 10 exist. Each one of the 10 has to fabricate their own parts to keep the machines running because no one manufactures the stamping machines for records anymore. That is a dead industry, I know abacuses are still made, but not for actual use in classrooms. Like animals on the extinction list, there is a chance that some level of viability can be re-established, but essentially their time and printed comic books are over. Regardless of the fad of wanting to listen to records for higher quality range of sound or nostalgia the record industry is already dead. Printed comic books are the same way, they are dead. Because of technology and ordering systems and delivering methods they will continue to exist, but more so in captivity and as a curiosity.

Let’s admit in a country of 350 million people, a comic book that sells 50,000 issues is considered a major hit. If they publish 12 issues a year that book would be said to sell 600,000 units, but it only has 50,000 fans. Since they are purchased on a non-returnable basis the actual sales to the public are slightly lower. A successful comic sells to .014% of the population. Let’s be generous and say only half the population can read and we can double that to .028% of the population. Yes there are tons of websites and devoted fans of the medium and comic stores still thrive, although they all usually have some cross selling of merchandise or gaming or something else added in. Comic books are for all intents and purposes dead or at the very least dying.

Eric Powell brings up some great points; first and foremost of the top selling 1000 comic in 2011 only 24 were not Marvel or DC superhero titles. Both Disney and Warner Brothers care a whit about the publishing end of this business. Disney does not give a damn about having Disney comic books. They can republish the old books forever as the next generation will see them as something new, but they are just the mix of the business to have in their gift stores and parks. They are not a viable consideration, any more then the lunchbox with Goofy is a viable living creative thing. The movies, cartoons, DVD, T-shirts, toys and the rest are the heart and soul of the business. Often an item is keep going so as to not lose whatever archaic copyright laws exist in regards to the characters, but I’m sure there is some way to work around that also. It only take one high level executive to say why in god’s name are we expending so much time and energy into yesterday’s market to pull the plug and Marvel or DC comic would be off the shelves tomorrow. If either one disappears every comic store in the country is doomed.

The industry and us as fans are our own worse enemy. We buy Avengers vs X-Men in numbers that make the Marvel group giddy and When Johns and Lee are on Justice League the book tops the charts. Yet Rachael Rising, Goon, BPRD, Locke and Key, Scalped, Northlanders, Memorial, Criminal and many other books scrape by and hope for good trade sales. We as fans are to blame because we refuse to try anything new. Or worse we have no way of reaching people who might be fans of graphic stories. Comic book stores on a general basis are not the most welcoming to a casual fan. Most of the small publishers make their living off licensed material. GI Joe, Transformers, Star Wars, Star Trek or recycling older characters again and again (see Dynamite’s line up). This is because as fans we seldom support anything new. I,Vampire is on of DC’s lower selling titles, yet Justice League (which is a horrible book) tops the charts in DC.

I no longer know how to break this cycle because it would mean the fan base would have to make a commitment. I would challenge each and every fan to drop two Marvel and two DC books and try three different books from a smaller publisher and I would include Vertigo under that umbrella. It won’t happen and the smaller publishers do not have the financial wherewithal to ship books as returnable in exchange for the book to be racked.

I loved Goon #39 by Eric Powell this week because he lampoons everything wrong with comics. Jim Shooter has written some good pieces on the lack of story telling on his blog, but Eric’s is better because not only does he rip the industry to shreds, he does it as he entertains us. Frankie’s gratuitous butt shots in a thong are hilarious and somehow something I may have to get burnt out of my mind. I have to admire how Eric has done so well with making Goon be a venue for any story. His last issue was so damn touching and emotional that he gave me a line that will serve as a truism for the rest of my life, that when my mother died I knew there was one less person in the world who loved me. As true as that sentiment is his column in this issue is just as true. Read it.

The printed comic book as a viable business is dead and it is our fault.
Posted by Jim at Monday, April 30, 2012