A shorter sampling of what the Baltimore Co Public Library, Reisterstown Branch, has to offer this time. I liked the last posting's method of the oreder being the order I read them, so I'll stick with that.

First off is Blacksad from Juan Diaz Canales and Juanjo Guarnido. It's another fun 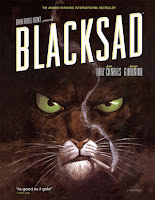 ny animal book, and one that Lee and I had mentioned in one of our Previews postings. Dark Horse put together this English translation. Somewhat amuing that it needs translation, being set in the US, but the writer's not a native English speaker. Guess that'll keep the Know Nothings from reading. Well, the fact that they're Know Nothings keeps them from reading as a general rule. Anyway, this is some great hardboiled noir. Lots of the little guy detective, Blacksad, trying to figure out cases without the powers that be coming down too hard on him. The first story, Somewhere Within the Shadows, was the best of the three stories in this collection. It's a more or less traditional noir with its urban setting and connected suspects. Think The Big Sleep, only making sense. Arctic Nation was the weakest. It's an allegory about race relations. Sort of. It wants to be an allegory by using animals in place of humans, but it's straight up black versus white, as the Arctic, white furred animals run a small, broken down company town. There's a lot of incestuous relations and beating deaths going on. Somehow the whole thing rings false. Maybe it's because the allegory is too one dimensional. 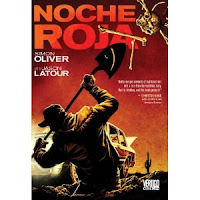 Next up is Noche Roja by Simon Olilver and Jason Latour. An imprint of the Vertigo Crime subdivision, it's another noir tale. I was on a bit of a noir trend this go round. No funny animals here. Black and white humans. Well, the characters are shades of grey. This story is mostly set just over the Mexican border from the US, though there's some action in the US. The protagonist is searching for the killer of a series of poor girls who work as virtual slaves doing whatever piecemeal work is being done at the factory. Some are just sexually molested by the factory boss, a slight improvement over the ones who are being killed by someone. The ghetto where the workers subsist is cowed by the factory operators, and the police are in the pockets of the same owners, so nothing is being done about the girls' deaths. Our hero has a history in the area, having investigated the local boss when he was a cop, until a friend and source was killed. No happy endings to this story. Brutal all around, really. Very much a product of its genre, it has a bit of the conspiratorial with a US Senator that's kind of easy to see coming, but it's enjoyable story.

re are different writers and artists for each of the 21 stories in the book. It's a nice, think composition with stories from different tribes and regions that all share the common element of a trickster character. Sometimes the trickster comes out on top. Sometimes not. I enjoy culturally specific stories like these. They provide insights into cultures, and in the case of these stories, are well told. Most of the writers are Native Americans from the tribe whose story is being told. Some were told and recorded a long time ago with only the art being new for this book. After the previous two noir books, it was a very nice change of pace. Probably my favorite of these three selections.
Posted by Thomm at Tuesday, May 01, 2012