Again we are in need of a post and again I have decided to pull something together. I get new comics on Thursday via the mail now since I moved to Florida. While I have a list of what I’m getting it is still fun to open the box. I also find I order number ones a lot since I’m not at the store to pursue stuff before I buy. Since I have cut back on DC and Marvel, it is usually fun getting new #1s from various publishers. I have always had a soft spot for Valiant books as I think under Jim Shooter that company had the potential to be the next Marvel or DC comics. Due to various reasons it did not come to pass. Now we have a new Valiant comics and a new X-O Manowar as their flagship book. Instead of the same static review I decided to experiment by doing a page by page impression of the book as I’m reading it. 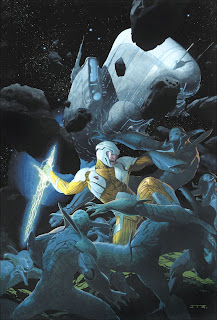 The cover – Okay, we can clearly see X-O swinging an energy sword fighting some bad guys that are clearly alien, but it is too dark and I can’t imagine it jumps off the rack.

Inside front cover, WTF is this. A timeline of X-O and we are welcomed to 402 AD. Two much information I just want to read the book, I’ll come back later.

Page 1, four vertical panels. Two soldiers are running in the field away from or towards Romans. Last panel it is not going well.  I know Cary Nord is the pencil artist and Stefano Gaudiano is inker, the art looks solid.

Page 2 and 3 – huge two page splash shows a lot of Romans firing arrows into a group of the barbarians. Oddly we see a word balloon pointing to the two guys who were running to the battle?  Minor point.

Page 4 and 5, two three panel pages showing the Romans kicking the snot out of the barbarians and they are deciding to retreat.

Page 6, three small panels across the top and a ¾ splash page. Aric, a warrior and a leader decides not to retreat and jumps off a small hill sword in hand to attack the Romans. Overly dramatic, but still we are moving the plot forward. Obviously Aric is to become X-O.

Page 7, five panel page. Aric tells the soldiers to hold and not retreat, He gives a inspirational speech and the troops follow. Oddly he finds a hill to deliver his speech from. Dramatic license I guess. I’m not buying it as the Romans are vastly superior in weapons and men. Personally I would run away, I would never have made a good soldier.

Page 8 and 9, one four panel page and one seven. More fighting as Aric leads the charge into the Romans reducing their advantage of weapons with a range. It is not going well for the barbarians.

Page 10, seven panels. More fighting. Terrific artwork makes these pages a lot of fun. Aric’s Dad gets stabbed and he grabs Dad and takes off on a horse to try and save him. It strikes me that now that he has spurred his men into a suicide attack, running off because Dad gets hurt is almost cowardly.

Page 11, 6 panel page – note the layouts are constantly different, but the flow of the story is fine so far. Since we have switched to the Visigoth camp, I guess I will call them Visigoths and not barbarians. As Dad is dying we find out the Romans have taken the women, including Aric’s mother and wife as captives and or on their way back to Rome. Apparently the huns drove the Visigoths out of their land and Rome is pounding them now. Not exactly a fierce hoard. Anyway Dad is dying.

Page 12 – seven panels. Dad dies, Aric takes Dad’s sword, which was the envy of all. Romans are coming towards their camp.

Page 13 – six panels. A spaceship is over the horizon, it is not Romans. Of course Aric attacks. Aric is an extremely rational guy.

Page 14 – six panels. I think not a single page has the same layout. Cary Nord is insane. Aric and crew killed some guys they thought were Romans. They weren’t. A big robot is now coming after them.

Page 15 – seven panels – I think this format was used once before. Purple cloaked aliens sneak into the camp and pull a baby’s hair and put it in a tube with green stuff. The tube is attached to a firing device.

Page 16 – seven panels. They injected it into an alien baby and now he looks human and apparently a duplicate of the other child and it seems like they swap the baby out for their creation. Mom finds baby and notices nothing. In comics it is hard to foreshadow a plotline subtlety.

Page 17 two panels. Aric is insane as he attacks robot thing as his men getting chopped to bits. Also it appears Aric has a vertical leap of about six to eight feet, the NBA is salivating. It does not matter, because it looks cool.

Page 18 – six panels. Aric learns his sword is crap against the robot and is knocked out.

Page 19 – five panels. Aric is dragged off with a friend and put into the alien ship.

Page 20 – three panels. The spaceship flies away from Earth. It is part of a fleet going back to essentially the aircraft carrier in space.

Page 21 – five panels. Many humans are marched off and will apparently to be used for slave labor.

Page 22 five panels – Aric kills a guard once out of site of the main force and is escaping with his friend. We know this will not work as he is in space now.

Page 23 five panels. They try to escape and hide from people marching by. Aric sees the aliens and realizes he is not in Kansas anymore. I guess when he killed the alien as he escaped he thought he was just an ugly guy.

Page 24  - five panels. The aliens march up and worship a blue armor ball asking it to open up. Obviously the XO armor has made an appearance.

Page 25 –five panel. It opens and the armor wraps around the alien. Aric and friend watch from the shadows amazed. Apparently they have never read an Iron Man comic.

Page 26 – six panels. Aliens recapture Aric and friend and it seems they maybe talking to each other or at least recognize the others demeanor. Aric threatens the alien. He complains they won’t fight him fairly which he complained about the Romans. Let’s see what happens later when he has the armor.

Page 27 – six panels. It is a four dollar comic, which is normal, but so far I’m getting some bang for the buck page count wise. Alien in armor says it talks to him, the power is amazing and he dies.

Page 28 – Six panels. Armor leaves alien and goes back to being a blue ball and worshiped by aliens who are apparently playing an alien version of the sword in the stone with higher stakes.

Page 29 – five panels. Aric is stuck in jail He is plotting how he will escape steal the alien weapons and kill them and the Romans.

Not a bad opening, nothing earth shattering, nice art, I’ll be back for issue #2. There is a six page Harbinger preview in the back. I sold my collection of the first six issues of X-O Manowar from before but I think it moved quicker to getting him into the armor. Either way so far it is not much of a re-imagining as it is a remake. Aric is one dimensional at this point and if he is to be the central character they will need to flesh out his character. We are missing a lot of the plot elements as to why the aliens came to Earth and other things, but the current trend it to tell a full story over an arc and then trade it. Cary Nord and Stefano Gaudiano carried the book.
Posted by Jim at Friday, May 04, 2012