Lee: A surprisingly light month for IDW. There’s still plenty of good stuff, just not the usual hoards of it.
Thomm: Hey, it’s vacation time, we’ll take our lighter load and like it. 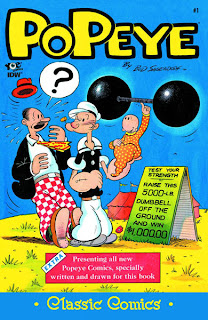 Classic Popeye #1 by (w/a/c) Bud Sagendorf
Representing the classic Popeye #1 from 1948 by Bud Sagendorf! This collector's item begins a reprinting of the complete Sagendorf's Popeye comic book series, nearly 100 issues long! Carefully reproduced from the original comic books and lovingly restored. Eat your spinach! $3.99
Lee: The feel good pick of the month. This is a small investment for some great stories that will leave you smiling, and maybe even laughing. You don’t need to be a fan of Popeye to enjoy these stories, just a fan of good comics.
Thomm: These I’ll have to check out. I’ve often been told that the early Popeye is far better than the hokum that was around by the time I was a kid.

There's 5 more below the break! 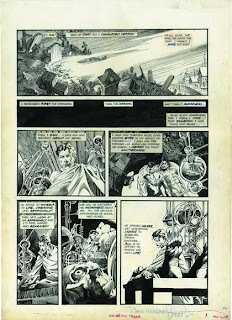 Bernie Wrightson: Muck Monster Portfolio
Bernie Wrightson is one of the most acclaimed horror artist's of all time. His work on Swamp Thing and many DC mystery books are hailed as classics of the form, but his undisputed masterpiece is Frankenstein, illustrated from the Mary Shelley novel. Leading up to Frankenstein, Wrightson did a series of breathtaking stories for Creepy and Eerie magazines, in the mid 1970s. Chief among these stories, and with the beginnings of the style he adopted for Frankenstein, was The Muck Monster. Now, IDW Publishing is pleased to announce the first Artist's Edition portfolio, and featuring the incredibly intricate detail of Bernie Wrightson's The Muck Monster. As with all Artist's Editions books or portfolios, the original art is meticulously scanned in color and from the actual original art. $29.99
Neal Adams’ Thrill Kill: Artist’s Edition Portfolio
Neal Adams redefined the look of comics in the 1970s. His groundbreaking dynamic storytelling, coupled with a sense of realism that was never before seen in mainstream comics, has made Adams one of the most influential artists of the last 50 years. He was responsible for what many consider to be the definitive version of Batman, as well as being the co-creator of one of the Caped Crusader’s greatest villains: Ras Al Ghul. He has produced near legendary runs on Green Lantern, Deadman (in Strange Adventures), the Avengers, the X-Men and many more.
Now IDW is pleased to present one of Neal's outstanding stories in the Artist's Edition Portfolio format. Each page scanned from the original art to match in exacting terms the look and feel of his original art. BW • $29.99 • 8 prints • 12” x 18”
Lee: Now this is interesting. Instead of $100 hc, IDW is releasing portfolios of art. It’s less expensive by far but the lack of binding makes me hesitate. Then again, this is probably the best opportunity to see the original art so I might invest. Who knows.
Thomm: Only the Shadow. The binding that’s missing for me is a narrative story. It will certainly look nice, so if art is your primary thing in our multifaceted medium, these are likely good bets. 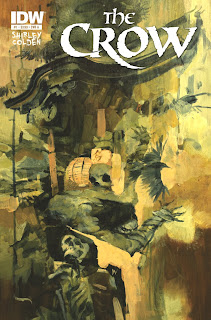 The Crow #1 by (w) John Shirley (a) Kevin Colden (c) Ashley Wood, Kyle Hotz
“Death and Rebirth,” Part 1. THE CROW is reborn—in Tokyo. Can a dark spirit fight for the light? THE CROW has always done just that—striking from the shadows, a kind of shadow himself. The spirit of the Crow is back, transfiguring Jamie Osterberg, an American studying in Tokyo and deeply in love with his Japanese girlfriend, Yumi... until the love of his life is stolen. The Crow must once more make the wrong thing right—but this time he might have to do it by killing his own true love... FC • 32 pages • $3.99
The Crow, Midnight Legends, Vol. 1: Dead Time by (w) J. O'Barr & John Wagner (a) Alexander Maleev (c) Kyle Hotz
After a ten-year hiatus, James O'Barr returned to The Crow with Dead Time, a story he envisioned as a new Crow film. A tale of grief, reincarnation, and long-sought vengeance, Dead Time is adapted by John Wagner and illustrated by Alexander Maleev. TPB • BW • $17.99 • 104 pages
Lee: Hummmmmm, a new Crow series and a reprint of an old one. The old one has good art but I don’t remember the story being all that good. As for a new series, I am not sure I am interested.  It was good the first time I read it but I am not sure I have enough love of the character to revisit him.
Thomm: My experience of The Crow is limited to the TV series. That was ok, but not sufficiently interesting to bring me into buying the comics. Nothing here is calling me, either. He does seem to be in a curious Catch-22 in the new story. 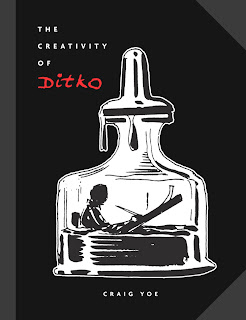 Creativity of Steve Ditko by (w/a/c) Steve Ditko
Steve Ditko's most creative comics are lovingly reproduced in a beautiful large format hardback book, "The Creativity of Steve Ditko," a companion to Craig Yoe's previous "The Art of Ditko." Forward by Paul Levitz with revealing essays by Mike Gold, Jack Harris, Mikal Banta, and Amber Stanton. Amber, daughter of fetish artist Eric Stanton, gives ground-breaking background about when her father and Ditko shared a studio for nearly a decade and worked on each others projects during the creation of Spider-Man.
HC • FC • $39.99 • 208 pages • 9.5” x 12.5”
Lee: I love these oversized hc’s. I don’t know why I even mention it because everyone already knows that. But, this looks to be a real winner. Ditko when he stretched himself was outstanding and this will be visually stunning.
Thomm: Now, as art books go, this would be one to get. Ditko, you know. If I think about what “fetish artist” means for too long I’ll be traveling down corridors with lexical dead ends. 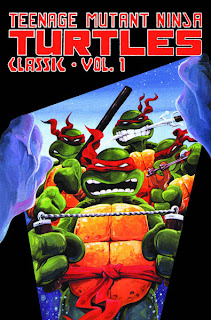 Teenage Mutant Ninja Turtles Classics Vol. 01 SC by (w/a) Michael Dooney, Mark Martin, Mark Bode & Kevin Eastman (c) Michael Dooney
The original stories of the Teenage Mutant Ninja Turles come roaring back to shelves with the line of Teenage Mutant Ninja Turtles Classics trade paperbacks! Volume 1 features favorite tales like The Peoples Choice, A TMNT Time Tale, and The Shell of the Dragon. $17.99
Lee: This is old but I missed it so now I want to talk about it. This is a collection of ‘best-of’ stories about the TMNT. Believe it or not, there was a time when the Turtles were a good superhero comic. There are some really good stories out there that went unnoticed. I don’t know if these are them but it’s worth looking into.
Thomm: T-U-R-T-L-E power! Sorry, that’s the one thing that sticks in my mind because a then 4 year old cousin of my wife was really into the cartoon. Of course, she’s getting married this summer, so this just makes me feel old.

Thomm: Classic Popeye and Ditko. One’s a lot cheaper than the other, but both look like the peaks for the month to me.
Lee: Apparently you are old.  It appears you are only interested in the old stuff.  Careful or you might turn into a comics curmudgeon yet!
Posted by Lee at Wednesday, May 30, 2012