Lee is having a personal crisis, I believe it is called having a job and children, in other words the man is busy, busy, busy. Heck we dragged Thomm’s post ahead a day so it would not be the blank page, because we do not work very far ahead. Anyway Lee was going to just have a gone on vacation or some other type of post, but I decided to see if I could opine about something comics related. I can usually bore any non-comics fan in the span of five minutes talking about comics, so I’m sure there is some subject I can talk about.

The Golden Age of Comics is one. First let’s get this out of the way; the early days of comic books were not the Golden Age of Comics. In my mind the term would denote that something was at its absolute best. No matter how you cut it those early days were about production, going with what ever sold yesterday and seeing what sticks. It was more of an Iron Age of comics or perhaps the Glory Days of comics. The Golden Age of Comics started about 10 or 15 years ago and is still ongoing. You can use the Watchmen as the first days of the dawning of a Golden Age when comic books started to become literate and the writers and artists use to medium to its best effect. Grant Morrison, Scott Snyder, Ed Brubaker, Jason Aaron, Eric Powell, Robert Kirkman, Terry Moore, Joe Hill, Jeff Parker, Bill Willingham, Jeff Lemire, Gary Frank, Ivan Reis, Marcos Martin, Gabriel Rodriquez and the list of artists and writers goes on and on and on. Today’s comics, in general, are the best comics have ever been. We are in the Golden Age of comics and the same time the print comic is in its death throes.


So back to what is called the Golden Age, it is a fun place to read about and to check out all the old stories and we are blessed to have so much of the material out there today. What got me into thinking about this recently is a book called Amazing Mysteries, the Bill Everett Archives Volume 1. This book is one hell of a bargain. I have been upset with a lot of the collections coming out of Marvel and DC as way too often they are not giving us enough extras. I also have been less then thrilled with some other collections of a single artist because often they miss balancing talking about the person and talking about their work. This book seems to have a better balance then most. 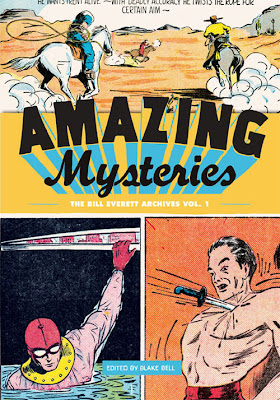 I have not read the entire book at this time, but I can say the introduction to the archive was a great short biography of Bill Everett. Then each subsequent section introduces the work that is about to be presented. I just wish we could have an ultimate collection of Bill’s work, but due to who owns what it has to be one of those things that we seek out over time. For a list price of $39.99 (or click this link Amazon is selling it for $29.19), this book does a wonderful job of showing off Bill’s early work and lets us learn a lot about the man. Bill unfortunately died way too young at the age of 55 in 1973. Not only was he the inventor of the Sub Mariner, he was also the first artist for Daredevil at Marvel comics in the early sixties. Bill was an enormous talent for telling stories. Bill’s work, often as writer and artist holds up much better then many other artists from his time. This volume is a lot of fun as you can flip through it and see how much Bill played with layouts and panel design. It is not as elaborate as JH Williams, but he is not set with one page design and his layout and story telling is superb. Bill was an amazing talent. It is s \ad that we lost him too early. Of course when you seek out Bill’s work you have to remember that often it was a mix of artists doing the work and unlike today where everyone is credited, in the golden age you still have to guess. Bill’s style is so distinct it is often easy to tell when he did all the work.

Bottom line for a good collection of a master in his early days, this book is hard to beat.
Posted by Jim at Thursday, May 03, 2012