Lee: Image is starting to get like Marvel and DC with a huge number of books on the stand. It’s taking more and more time to get through the solicits each month because there is so much good stuff to be had. And even the books I know I won’t buy are fun to look at.
Thomm: Which makes it different from Marvel and DC, too. Almost none of the stuff on their solicits is of any interest. 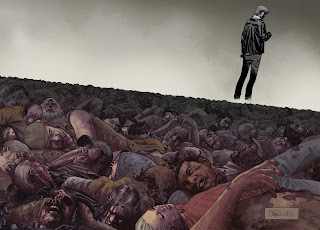 The Walking Dead #100
story Robert Kirkman
art Charlie Adlard / Cliff Rathburn
40 Pages / BW / $3.99
This extra-sized chapter contains one of the darkest moments in Rick Grimes’ life, and one of the most violent and brutal things to happen within the pages of this series. 100 issues later, this series remains just as relentless as the debut issue. Do not miss the monumental 100th issue of The Walking Dead!
Lee: It’s finally here, the 100th issue! If you had told me years ago that this would make 100 issues AND been a tv show I would have laughed at you. Now it’s one of the great success stories of the last 10 years. I can’t wait to see what happens.
Thomm: I’ve been along on this ride for a lot longer than I thought. It seemed like I was late when I started, but it’s kept going so smoothly I’ve not noticed how long it has been. Of course, what I want to see is a visit to Baltimore County, seeing as the cast is in the DC area these days. Somehow I don’t think that’s the big even planned for this issue.

A bunch more below the break 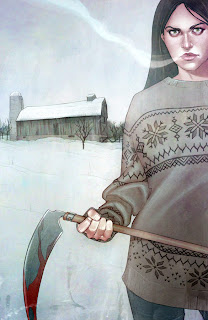 Revival #1
story Tim Seeley
art Mike Norton
cover by Jenny Frison
32 Pages / FC / $2.99
For one day in rural central Wisconsin, the dead came back to life. Now it's up to Officer Dana Cypress to deal with the media scrutiny, religious zealots, and government quarantine that has come with them. In a town where the living have to learn to deal with those who are supposed to be dead, Officer Cypress must solve a brutal murder, and everyone, alive or undead, is a suspect. A beautiful “farm noir” that puts a new twist on the zombie genre, created by NYT Bestselling author Tim Seeley and acclaimed artist Mike Norton.
Lee: Since we lead with Walking Dead, let’s talk about the other zombie book… which is farm noir! Gotta love that description. Anyway, it’s got potential and if you are tired of zombies yet this is probably worth a try.
Thomm: There was a preview for this in Image’s Free Comic Book Day offering. It looks to be very good. 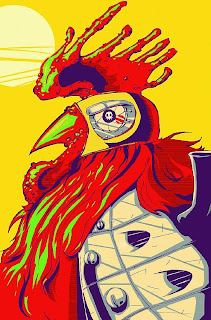 Chew: Secret Agent Poyo #1
story John Layman
art / cover Rob Guillory
36 Pages / FC / $3.50
Hey retailers/readers/speculators! Still kicking yourself for not ordering and/or passing by Chew #1, now that you see what it’s going for on eBay? Here’s your chance to get sweet, sweet, revenge, with an all-new Chew #1, a one-shot spinning off Chew’s most popular supporting character, and comics’ most beloved homicidal cybernetic kung-fu rooster. Concentrated mayhem. Feathers, rage and hate! Plus: an all-star pin-up gallery from some of the most staggeringly talented artists in the industry!

Lee:  Let’s just highlight the important part, this book is about the adventures of… and I quote… “comics’ most beloved homicidal cybernetic kung-fu rooster.”  If that doesn’t make you wanna buy the book then nothing will.
Thomm: Nothing will. I got the first trade of Chew and wasn’t that into it. On the other hand, a homicidal cybernetic kung-fu rooster does sound like a lot fun. Maybe it’s one of those spin offs that’s better than the original? 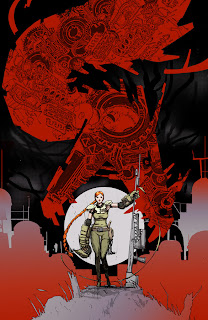 Debris #1 (of 4)
story Kurtis J. Wiebe
art / cover Riley Rossmo
32 Pages/ FC / $3.50
In the far future, humanity has doomed planet earth to rot and decay, covering her surface with garbage. Now, ancient spirits called the Colossals rise from the debris and attack the remaining survivors, forcing the human race to the brink of extinction. One warrior woman, Maya, sets out to find the last source of pure water to save the world before the monsters bring it all to an end.
Lee: IDW has cornered the horror market so Image goes for the sci-fi future destruction niche. I have to say I love it and with Wiebe writing and Rosso drawing I am pretty sure this will be great.
Thomm: I have an issue with the premise. Why do Colossals need to rise up to destroy humanity when humanity has already done that? It’s not like the humans could survive long on a giant trash pit. I think this would take me out of the willing suspension of disbelief. 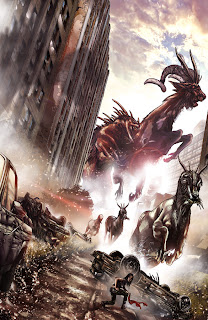 Enormous #1 (one-shot)
story Tim Daniel
art / cover Mehdi Cheggour
64 Pages / FC / Treasury Sized / $9.99
In the midst of a planetary battle for food and fuel, a vast ecological cataclysm spawns The Enormous, massive beasts unlike anything ever witnessed. Humankind struggles to stave off extinction and the only law is to hunt or be hunted. It’s an epic action adventure featuring the survival of the biggest!
Lee: Lots of apocalypse stories from Image this month. That’s ok because this book is Bigger than the last one. That’s right, this is treasury edition sized! The art looks a little photo-shoppy to me but I bet it will look great full size.
Thomm: Now, the premise is better here, but 2x the pages that Debris has is being charged nearly 3x as much to buy. That’s not going to lure me in. I get more pages in DHP for a buck less. 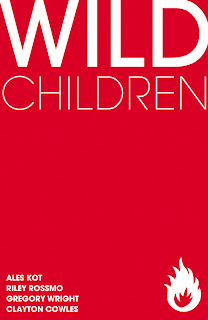 Wild Children (one-shot)
story Ales Kot
art Riley Rossmo
64 Pages / FC / $9.99
Guns. Acid. Cameras. School.  The themes behind the controversial Hellblazer: “Shoot” by Warren Ellis and Phil Jimenez merge with the attitude of the Grant Morrison and Philip Bond masterpiece of teenage revolt, Kill Your Boyfriend, delivering a story of magic, passion and disinformation.  Wild Children: A different type of education
Lee: Wow. Ummm. So, any idea what this is actually about? In the hype, you mentioned 2 separate books and four other creators without once using a verb to describe the book you are trying to sell me. 4 nouns does not make me want to buy a book. And the monocolor cover… let’s just keep moving along.
Thomm: I don’t have any more to add about the book, but can I just say that Riley Rossmo is a very busy artist. He’s all over the place, and we haven’t even looked at Rebel Blood. 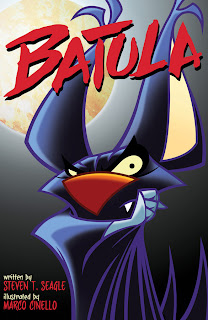 Batula HC
story Steven T. Seagle
art / cover Marco Cinello
48 Pages / FC / Oversized / $14.99
Man Of Action Studios - creators of the international hit Ben 10 -- return with an all-new big book for little readers! Livingston is a peaceful fruit bat whose life changes when he is bitten by a vampire and transformed into a vampire bat! As Batula -- an avenging creature of the night -- Livingston develops a taste for adventure and a need to prove that no matter what he looks like on the outside, he's still the same bat on the inside. A full-color story book by Frankie Stein creators Seagle & Cinello!
Lee: Man oh man do I wish my kids were still reading this type of material. This looks perfect for that early reader, just finding comics kid. I have so much of it in the house now I don’t need more. Hummmm… do we know anyone who doesn’t have a good selection of books geared towards their grandchildren? Even though said grandchild can’t read yet, it’s always good for a grandparent to read to a child. Nothing instills a love of comics faster than reading excellent comics like this one to your grandchildren.
Thomm: Especially a grandparent who works from home and should have plenty of schedule time to work in reading to the grandkid. 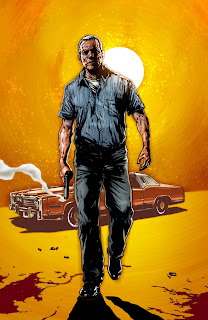 Sunset HC
story Christos Gage
art / cover Jorge Lucas
160 Pages / BW / Digest / $19.99
Sometimes All You Can Do Is Go Out With Guns Blazing… In the noir tradition of Chandler and Spillane comes Sunset, a two-fisted tale of revenge and redemption. On the surface, Nick Bellamy looks like any other veteran retiree left behind by a modern world. In reality, Nick is a former enforcer, who stole a fortune and years of freedom from his former mob boss. Now, in the twilight of his life, Nick will lose everything he cares about except two things: revenge… and the chance to die with his guns blazing.
Writer Christos Gage (Avengers Academy, GI Joe: Cobra) and artist Jorge Lucas (The Darkness) promise to hit hard with Minotaur Press’s first original graphic novel that will make you forget all about your Prius and organic whole-grain trans-fat-free diet.
Lee: Gage is one heck of a writer and Lucas a one heck of an artist. I have no doubts this will be good, if not great. I wish it were full instead of digest size but that’s not gonna stop me from getting this.
Thomm: What’s he need revenge for? He’s the one who betrayed his boss and he’s living out his golden years. Seems like he ought to be hiding out from someone else’s revenge. 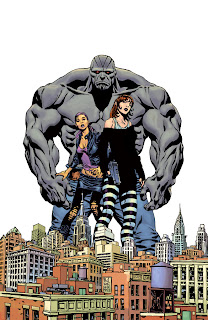 The Monolith HC
story Jimmy Palmiotti &/ Justin Gray
art / cover Phil Windslade
96 Pages/ FC / Oversized / $17.99
We are introduced to Alice Cohen, a down and out ex-junkie who inherits a house in Brooklyn from her deceased grandmother. Alice discovers her diary and begins to read the tale of a lost love and revenge that begins in the factories of New York during the depression and shows the creation of a monster bent on revenge for the slaying of a good honest man.  Originally published by DC Comics, but collected here for the first time, featuring an introduction by the legendary Jim Steranko and the amazing art by Phil Winslade.
Lee: I seem to remember hearing really good things about this. One of those infamous “cancelled before its’ time” series. I’m a sucker for oversized collections so I might take a chance on this.
Thomm: I missed this altogether. Hard to picture it coming out under the DC banner, but you know. Every now and then such things happen. Looks like an interesting concept and characters.

Thomm: I’m liking the Image variety this month. Despite Lee’s quip, it’s not all sci-fi. That being said, Revival is the one I’ll be keeping on my list of things to read.
Lee: Revival looks good but I have to go with Gage and Sunset.  Gage has been too hot a writer lately that I can't pass it up.
Posted by Lee at Thursday, May 17, 2012