Lee sent me some more of the leavings of his Alexandrian library of comics related material.  I'm going to take these one at a time because they're just that...curious. 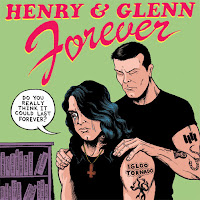 First is Henry & Glenn Forever, a publication of Igloo Tornado.  This is a 6x6 book and, scarily, is the best of the bunch.  Not for being overly professional in presentation, because it's lacking a bit there, but it's the most entertaining.

All it is  is a series of one off panels operating on the premise that Glenn Danzig and Henry Rollins are lovers.  As two of the hardest of hard core rockers, this is a pretty funny premise.  The writers make it a bit more so by implying they're living in fear of retribution.  Oh, and Daryl Hall and John Oates are the gay couple next door who are Satanists.

The panels themselves are hit and miss.  There are various creators, based on the differences in art in the panels.  My favorites tended to be the ones where Glenn is depicted as a sort of Little Orphan Annie/Goon character. 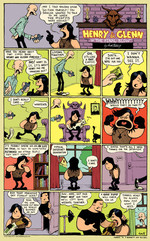 For no particular reason there's also a panel where Wolverine asks Colossus if his pants make his butt look big.  It's that kind of out of left field that pulls it back for me, because when it's on, the book has some really funny takes on issues ranging from homosexuality and abortion to vanity and Satanic rituals.  Not likely to be to a wide audience taste, but a good read if you don't mind being offended every now and again.  Just don't tell Glenn.

Lee's comment:  If you're familiar with heavy metal and the music of Henry and Glenn, there are lots of references to lyrics which make many of the pages even funnier.
Posted by Thomm at Tuesday, May 15, 2012