The first thought I have is will DC now be doing the drop six to eight titles every once in a while? Then add eight new ones all the time from now on, holding to just 52 titles? If yes, I’m fine with that philosophy, just curious. Then if this is the second wave, how long does that analogy last? In a few years the 10th wave does not have the same cool sound as the second wave. I was happier with these four books then I was with most of DC lately, so I decided some capsule reviews were in order. 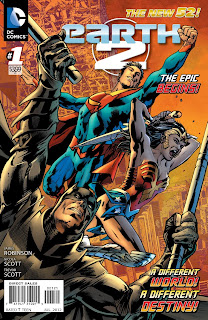 Earth 2 #1 is by James Robinson (writer) with Nicola Scott (pencils) and Trevor Scott (inks) and colors by Alex Sinclair. This book was great. They played off the first Justice League arc and showed in this world Darkseid won the war for a time. Batman, Wonder Woman and Superman sacrifice themselves to take Earth back. We then flip to seeing Alan Scott and Jay Garrick, both are not heroes or connected and both are young. The book ends with Mercury showing up at Jay’s doorstep. I loved it. The JSA (or whatever) is being reborn as the second generation and we get to see them as their careers begin. This is so much better then the unknown past of the characters in the current DCU. I have no clue about who those characters are; here I’m in on the ground floor. Plus I love the JSA and starting them over is fine by me. Heck I would have accepted the same thing in the DCU more then the half ass re-launch we got. James Robinson seems to be in his element, able to craft more of what he wants to do as opposed to making everything work with what he was given. I’m thinking of some of his recent Superman work which did not feel like the same James Robinson whose work I usually enjoy. Nicola Scott with Trevor Scott is looking like a top flight super hero artist. Her work has always been strong, now it moved up another notch. All topped off by the best super hero color artist in the business makes a nice package. This looks like a hit. 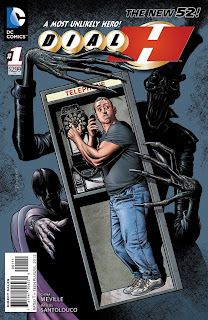 Dial H #1 is by writer China Mieville and artist Mateus Santolouco. This is one odd and quirky series and I already love it. I have no clue what the heck is going on at this point and our reluctant Dial H for hero guy is the most unlikely hero of all time. The two “heroes” were absolutely amazing and so wonderfully bizarre. Boy Chimney and Captain Lachrymose, you could not find two odder heroes anywhere in comics. China has certainly hit the ground running for what is the first comic I remember him writing. I looked him up and he is a proven writer with politics that would make Thomm seem like Barry Goldwater. I have no clue why DC insists on having these under the DC banner as opposed to Vertigo, but if it generates more sales that way and the books are not dragged into pointless DC events I have no problem with it. DC is two for two with me right now. 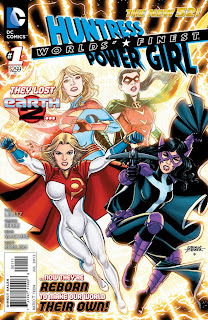 Next on the hot parade is World’s Finest #1 by Paul Levitz as writer with George Perez and Scott Koblish on the modern day sequence and Kevin Maguire on the flashback sequence. I also liked this book. Take Levitz away from the LOSH and I’m okay with his writing, it does not hurt having two great artist illustrating the book. The story is about Robin and Supergirl from Earth 2 being stuck in the regular DCU. They both take new identities as Huntress and Power Girl. It is a neat twist and gives us two legacy heroes with a mission to get back home. It will be curious to see how this ties into Earth 2 and if and when they interact with the regular DCU. I hope George can handle half a book a month because the artwork is gorgeous. I think George has been around so long we take his greatness for granted. DC is now three for three, with this being a notch below the first two. 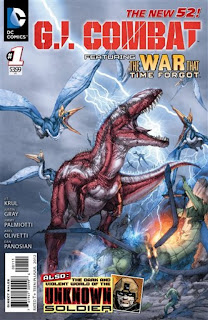 Last and for this week, least is GI Combat #1. I give DC props for continuing to support more then straight super hero books, but this is really two comics, The War That Time Forget and The Unknown Soldier. I fear that a fan of one and not the other will not fork over $4 for half of a comic. Still The War That Forget was set up beautifully as we have time lost warriors stuck in a world with dinosaurs. What five year old boy does not love tanks and dinosaurs? The Unknown Soldier was a decent set up for the origin of the character. The opening page was a little disconcerting as the US soldier is kicking in the door to kill some Taliban bad guys, but the whole massacre in Afghanistan by a US Soldier is what first came to mind when I saw that page. DC has some solid talent on this book with JT Krul (writer) and Ariel Olivetti on The War that Time Forget and Jimmy Palmiotti and Justin Gray (writers) with Dan Panosian on the Unknown Soldier. I hope I’m wrong about the sales problem this series could have because I’m more inclined to this type of book that another reiteration of Green Arrow.

I’m just a blogging fool lately, but that should be it until next Monday for me.
Posted by Jim at Tuesday, May 08, 2012