Two Books and A Movie

Well it is not a week in a review it is a discussion of two Marvel comics that came out this week and a movie. I’m defining the week being from Wednesday to Tuesday as we are all mainly comic book people. I have given up for all intents and purposes the possibility of actually reviewing the week in its entirety as catching up has become a never ending task. I’m getting closer, but it is what it is.

On some other notes the Avengers was an awesome movie and out and out fun. I hope it holds up over time, as often these summer popcorn movies fall apart with distance. It is nice to see the Baltimore Orioles playing great baseball to start the year, but they dashed my hopes before and I’m unwilling to give them my heart again until July. At least with my new locale I can see them play the Tampa Bay Rays and right now it would be two top teams fighting it out. I can be the outsider rooting for the O’s.

The two books I want to discuss are Avengers vs X-Men #3 and Daredevil #12. Both are examples of professional and well done comics and both are rife with problems that exist because of the never ending nature of these characters. 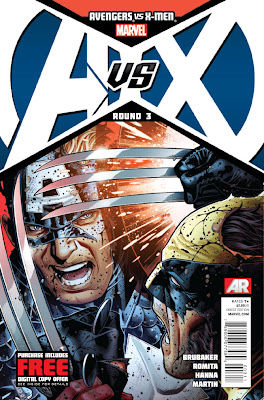 First up is Avengers vs. X-Men #3, written by the favored writers of the marvel staff (sorry Rick Remender, Jeff Parker, Dan Slott and others you are second class citizens), scripted by Ed Brubaker with John Romita Jr. on pencils, Scott Hanna on inks and Laura Martin on colors. The actual story is paint by numbers with the X-Men escaping and the quest being split into five pieces allowing the cast to be reduced per task. This is classic group super hero book writing and goes back to the days of All Star Comics and the Justice Society. We get an ultra cool moment of Captain America kicking Wolverine out into the middle of nowhere as he does not trust him to follow orders in this case. A very cool moment, but Wolverine never follows orders, it was not a stretch. John Romita Jr. is certainly a strong story teller and his art can be dynamic, but it always gets looser and looser with each issue as I guess deadlines catch up with him. This issue is no exception and I expect we will have a new artist for the next segment as I believe it was scheduled. Scott Hanna helps a lot, but some pages just don’t cut it. The writing is fine and Brubaker does better dialogue then Bendis, still it feels like it is being written down a little. I just get the feeling that there is an additional need to make this more of an all ages read. I know it is the big crossover event and all but it does not mean it can’t have more sophistication in how it is written. All in all I would have to say that it is an enjoyable ride. The type of book that is simplistic and easy enough to follow. The pluses are it feels self contained so far and should make a nice hard cover for those who want to re-read it. For me it is something I will read as escapism entertainment.

The problems I have with what is going on are varied. First off I downloaded the Marvel AR application. The Augemented Reality is very lame. Often it goes shows the panel as a penciled panel. Something I think would work in a digital presentation of the comic, but it is just a time waster as an application on some panels. A side note is that I have been posting and will continue to post the free digital copy I get for someone to claim. Hopefully someone is claiming them. Another thing I thought was wrong with this book is the timing. The Avengers movie opened on Friday and is going to maybe hit $200 million as of this writing on Saturday. Why is this book not being started on Wednesday May 2 with a ton of new #1 issues sitting on the stands for people to buy as they show up for Free Comic Book Day. Free Comic Book Day is in my opinion a meganormous waste of money and effort and generates very few new customers versus the bang for the buck. Still it does get a bunch of people into stores that normally aren’t there and this is a perfect product to put out there. As for FCBD, the store near me in Seminole did not even have any signage out about it outside the store when I drove by today. The other comics being impacted by this crossover event have been poor additions. For the most part those books have rehashed what is going on and feel very much like they are treading water. The final problem with these stories is that there is never an impact that last. Marvel had Civil War, Secret Invasion and whatever else and nothing changes. Obviously I’m in the minority caring about that. It is just that in Walking Dead when Rick’s wife is killed, we know she is not coming back and we see that it drives Rick a little crazy for a period of time. What happens matters and it is why Marvel and DC have lost all the pizzazz for me. It can be fun escapism, but I no longer hold out hope for great stories and I think it is a lost opportunity. 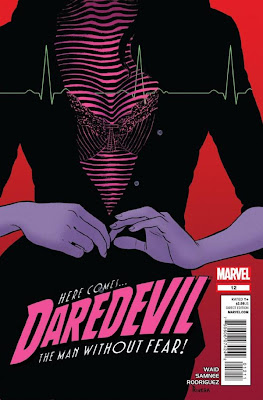 The second book I wanted to discuss was Daredevil #12, heck this could have been another pointless issue point 1 issue. The issue is by Mark Waid writing and the wonderful and severely under rated and under appreciated Chris Samnee on art. I love his work and hope this is a higher profile job. One thing I give Marvel is they have a ton of artists working for them and in general I think they outstrip in quality of the way their books look. It is a close battle, but right now I give Marvel the edge. The story is a simple one of Matt going out on a date as we see his love life starting to come together. Of course given his track record you have to feel bad for the girl friend. It ends up being a flashback issue of Matt and Foggy being in law school. Matt saved Foggy from getting expelled and Foggy got Matt’s school paid for. The dialogue and character interaction is top notch. Some writers over time loss their ability or phone it in assuming that their reputation will sell the books. It is always amuses me as I think people sometimes believe they have more fame then they do, outside the comic book world 99% of these guys are total unknowns. Mark Waid is a true professional. I think on politics his liberal viewpoint and my more libertarian type bent would clash, but I admire his work. This is the best Daredevil’s has been in decades. It made me decide to sell the Bendis and Brubaker Omnibuses as I realized they were just continuations of Frank Miller and Waid has remade Dardevil. Chris Samnee’s artwork is as glorious to behold and matches Waid’s script. He makes a story about a date and law school fun to read. His story telling skills are so sharp that words are often superfluous. A great effort on and the best this comic can be given the corporate constraints. For some more great stuff by Waid click here for Thrillbent comics. Mark is putting up some digital comics and taking a swing at a new business model for comics. I know Ellis played with this also, but this is the next generation of the idea and worth checking out. I’d loved to see this succeed.

The problem I have with the comic is the sliding scale of Marvel reality. The unwritten (or perhaps it is written) is that everything happened in the last ten years. So we see the flashback scenes all the students are using laptops and oddly enough an overhead projector. For me it just always takes me out of a book. I start to think how could the career of Dardevil manage to encompass all the things that happened to him in just ten years. It is a comic and all of that, but the 50 plus years of history so weigh these characters down. I also know that no real change can ever happen, so no matter how happy I am with the fresh coat of paint on Daredevil, I’m still living in the same house and the plaster stills needs mending on ceiling and the upstairs bathroom has yet to be remodeled. Just another example of why I can enjoy comics, I just know we are not getting anything that will be a game changer.

You have to remember that what got me excited about comics as a kid were Marvel comics and in the beginning of Marvel comics things happened and changes mattered. Reed and Sue got married and had a kid, Spider-Man got out of high school and went to college and more. DC was just static stories of the characters were the villain was the only difference from issue to issue. Super hero comics are more sophisticated in some ways today, but nothing is going to change except my buying habits, which is tending more and more towards independents and getting back to prose stuff.