Jim: Every new month for DC is more and more of a challenge. In some ways DC has broken my heart and like a jilted lover I keep hoping maybe we can spark the romance anew again. I use way too many allegories of personal relationships with comics, but the characters were always real in my imagination.
Gwen: I also feel bored with DC, and honestly with a lot of cape comics these days. 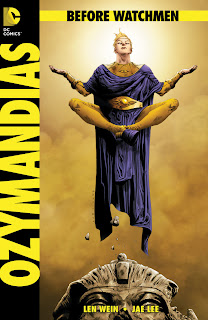 BEFORE WATCHMEN: OZYMANDIAS #1
Written by LEN WEIN
Art and cover by JAE LEE
Backup story art by JOHN HIGGINS
1:25 Variant cover by PHIL JIMENEZ
1:200 Variant cover by JIM LEE
On sale JULY 4 • 32 pg, FC, 1 of 6, $3.99 US • MATURE READERS
Combo Pack Edition: $4.99 US
Retailers: This issue will ship with three covers. Please see the order form for more information.
“I have goals to achieve. Dreams to make come true.”
Plus, a new CRIMSON CORSAIR backup feature from writer LEN WEIN and artist JOHN HIGGINS!
Jim: Len Wein was a decent writer in his day, but that day has passed. I would be shocked if this was any good and I would be even more shocked if it comes out on time as Jae Lee is not always a deadline type of guy. At least with Jae Lee the book will look good. I keep see Bob Harras bringing back people. DC needs to be tapping all of the new talent floating around. Scott Snyder is one of their brightest stars and he is still a relative newbie.
Gwen: Again, I am just not feeling the new pre-Watchmen stuff. I do like the cover though, very compelling. 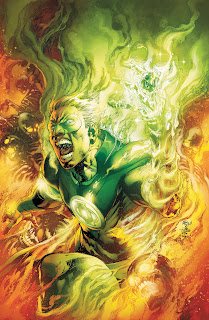 EARTH 2 #3
Written by JAMES ROBINSON
Art by NICOLA SCOTT and TREVOR SCOTT
Cover by IVAN REIS and JOE PRADO
1:25 B&W Variant cover by IVAN REIS
On sale JULY 4 • 32 pg, FC, $2.99 US • RATED T
Retailers: This issue will ship with two covers. The variant cover will feature the standard edition cover in a wraparound format.
• The all-new origin of ALAN SCOTT GREEN LANTERN – unlike any GL origin that's come before!
• The debut of the all-new HAWKGIRL!
• And Jay Garrick, THE FLASH, meets his first Super Hero!
Jim: I recently read issue #1 and this book actually has me excited. They are starting up the Justice Society, but they are coming after Superman, Batman and Wonder Woman. Also we are seeing their stories from the beginning. I like this better then the New DCU by a mile.
Gwen: I'm just happy that there's a world with Jay Garrick. I was really annoyed that they made him not exist in the main DCU. 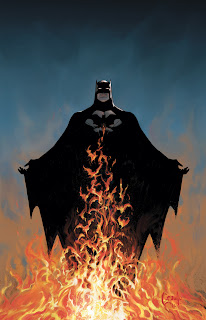 BATMAN #11
Written by SCOTT SNYDER
Backup story written by SCOTT SNYDER and JAMES TYNION IV
Art by GREG CAPULLO and JONATHAN GLAPION
Backup story art by RAFAEL ALBUQUERQUE
Cover by GREG CAPULLO
Variant cover by ANDY CLARKE
1:100 B&W Variant cover by GREG CAPULLO
On sale JULY 11 • 40 pg, FC, $3.99 US • RATED T
Combo Pack Edition: $4.99
Retailers: This issue will ship with three covers. Please see the order form for more information.
• The stunning conclusion to “THE COURT OF OWLS” epic!
• All is revealed in “THE FALL OF THE HOUSE OF WAYNE.”
Jim: I’ve enjoyed this Batman story. Snyder is already one of the best and he does a tremendous job of making each issue stand as a good read on its own while building the bigger story.  I hate that I may buy the hard covers, because this could end up being an Absolute book.
Gwen: Awesome cover. I've liked what I've managed to read of this but I have yet to catch up with all of the Bat-stuff involved. 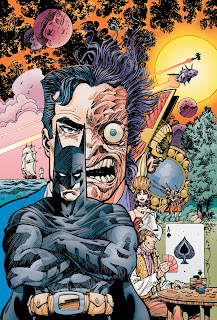 THE JUDAS COIN HC
Written by WALTER SIMONSON
Art and cover by WALTER SIMONSON
On sale SEPTEMBER 12 • 96 pg, FC, $22.99 US
This centuries-spanning original graphic novel from legendary writer/artist WALTER SIMONSON shows how one of the silver coins Judas was paid to betray Jesus has had an impact on the DC Universe, with chapters starring THE GOLDEN GLADIATOR (73 A.D.), THE VIKING PRINCE (1000 A.D.), CAPTAIN FEAR (1720) and BAT LASH (1881). In the centerpiece of the book BATMAN faces TWO-FACE in an epic, present-day battle before the story blasts into the future for a final chapter set in the year 2087 starring MANHUNTER 2070!
Jim: Normally I’m a sucker for a Batman story and Walter Simonson artwork, but somehow this solicitation leaves me cold and I have passed on this book. I guess the religious theme is something out of my interest range also.
Gwen: I think this looks interesting. I don't mind the religious mythos interwoven but I'd like a little more story background before picking it up. 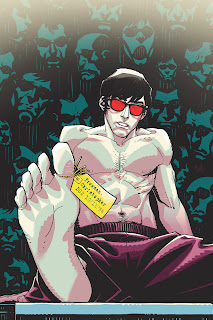 Jim: So I read somewhere this is going to be a series of number one issues featuring different DC characters as they are re-imagined for the new DCU. That makes it easy to just buy the issues based on the creators. Jeff Lemire makes this a yes.
Gwen: I only know Kid Eternity as a side character but as this is a stand alone I'd be interested in reading it through. 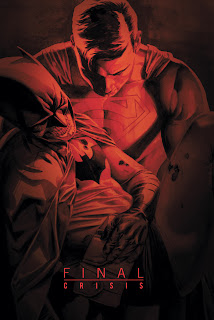 ABSOLUTE FINAL CRISIS HC
Written by GRANT MORRISON
Art by DOUG MAHNKE, J.G. JONES, CARLOS PACHECO, DOUG MAHNKE, MATTHEW CLARK, JESUS MERINO, CHRISTIAN ALAMY, MARCO RUDY, TOM NGUYEN, LEE GARBETT, TREVOR SCOTT and others
Cover by J.G. JONES
RESOLICIT • On sale OCTOBER 31, 464 pg, FC, 8.25” x 12.5”, $99.99 US
Retailers: This title is resolicited. All previous orders are cancelled.
• Collecting the mind-blowing event including FINAL CRISIS #1-7, FINAL CRISIS: SUBMIT #1, FINAL CRISIS: SUPERMAN BEYOND #1-2, and the FINAL CRISIS SKETCHBOOK, plus the newly added FINAL CRISIS #1 DIRECTOR’S CUT and BATMAN #682-683!
• Resolicited – now with SEVEN NEW STORY PAGES BY MORRISON AND MAHNKE!
• Superman, Batman, the Justice League and every other super being in the DC Universe must face when Darkseid and his otherworldly legion of followers in the war between light and dark!
• This oversized, slipcased hardcover comes with its own pair of 3-D glasses!
Jim: I finally succumbed to the re-solicitation and will buy this version. I just wish they would give us a non-3D option. I wear glasses and the 3D stuff is more of a hassle then anything to try and read it. 3D is a gimmick with printing, in real life 3D works fine.
Gwen: Ugh, 3D. I am so tired of the 3D craze :( 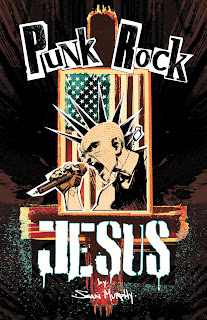 The newest reality show hit has the unlikeliest celebrity of all in this new black and white miniseries from writer/artist Sean Murphy (JOE THE BARBARIAN, Off Road)!
J2, the TV series starring a clone of Jesus Christ, causes chaos across a near-future United States in PUNK ROCK JESUS, a new miniseries written and drawn by Sean Murphy, the acclaimed illustrator of JOE THE BARBARIAN and AMERICAN VAMPIRE: SURVIVAL OF THE FITTEST.
J2 causes outrage and adulation. Religious zealots either love or hate the show, angry politicians worry about its influence on the nation, and members of the scientific community fear the implications of cloning a human being at all – let alone the Son of God. And what effect will this all have on Gwen, the young woman who is selected, through an American Idol-style process, to be the mother of the new Messiah?
All this leads to the hiring of Thomas McKael, the clone’s bodyguard and a former IRA operative with a turbulent past who must protect the new Messiah – a baby who captivates the world, but grows up to become an angry teenager.
Jim: I just have to see how this reads. It could be funny; it could be a train wreck.
Gwen: I'm thinking train wreck... but who knows. 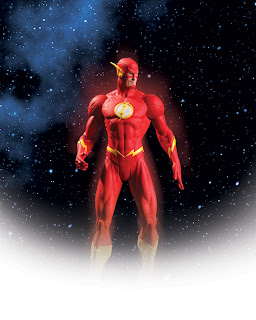 DC COMICS—THE NEW 52! THE FLASH
THE FLASH – 6.75” h
Barry Allen is back and faster than ever as a member of the Justice League in the DC Comics—The New 52! Based on the newly designed costume by Jim Lee, this statue is a must buy–so tap into the speed force and order one before time runs out!
* Action Figures * PI • On Sale August 15, 2012
*Allocations May Occur
Jim: Who thought the Flash would look cooler with a chin guard. They need to be fired.
Gwen: The funny thing is after watching Captain America and the Avengers movie I have come to the conclusion that the pull over mask doesn't look good in real life no matter what you do.


Jim: DC has not been bringing it for the most part and it is harder to make this a two day post, so we made it just one day this month.
Gwen: And another unenthusiastic month of DC! I miss the Legion of Superheroes most of all :*(
Posted by Jim at Wednesday, May 16, 2012