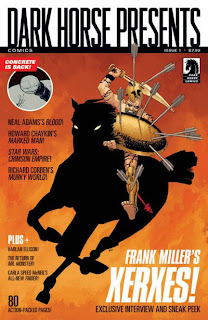 Predominantly I am a trade guy. I made the switch a coupe of years ago and haven't looked back.  Normally this isn’t a problem because 99% of what I read gets collected in short order. But that wasn’t true for one series that I really wanted to read. Thomm’s been raving, and I’ve been loving the covers every month, so I’ve been dying to read the latest incarnation of Dark Horse Presents. Since it doesn’t appear that DH is going to collect the series anytime soon I was in a spot. Luckily, Thomm was kind enough to loan me his copies!

So what did I think? I’ve managed to read the first six issues and… and… it’s all below the break.

DHP #1:
The Good:
I never thought I would see the return of the Howard Chaykin that once was.  But Chaykin’s story, Marked Man, is some of the best work he has done in years. I was shocked how much I loved this story. His art is what it is at this point. He only has one male face and his photoshop art doesn’t always work. But the story just clicked in a way his material hasn’t for a long time. It’s a solid premise and he jumped right in introducing characters and setting the stage for obvious conflicts to come.
The Terribly Mediocre:

Paul Chadwick’s Concrete was surprisingly dull. It isn’t bad by any stretch but Chadwick is better than this and I expected a lot more from him. If it weren’t for nostalgia and a general love of the character, this would have been bad.
The Bad:

- Ohhh, this is easy, Neal Adam’s story Blood is bad. It is incredibly over written. It’s 8 pgs of dense text which is nothing more than setup. It’s painful to read. The art is a mixed bag too. Adams still has great chops with pen/ink but he’s starting to play with photoshop and it hurt the overall effect. There were several points where the effects laid on the page completely detached from the art.
- Star Wars Crimson Empire. I call this bad because it was a solicit for another series. I understand why it’s done but I don’t have to like it. I am paying for stories that should hopefully end in this book somewhere down the line. It’s like DH stole 5 pages from me.
The Rest: 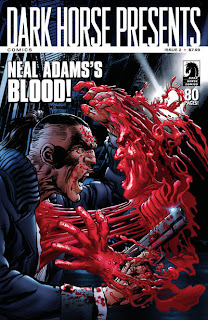 Gilbert’s Mr. Monster was fun even if the art looked rushed. Carla Speed McNeil’s Finder was a fun little setup as was another story Snow Angel by David Chelsea. Corben is… well Corben. Either you love his work... or you don’t.

The Verdict:
When I first read this I was ready to crush it because Adam’s story is soooo bad and Concrete was such a disappointment that it really impacted my initial thoughts. But, in retrospect it’s all setup.  Once I realized that then I recognized that it’s a fine mixture of new and old which makes it entertaining. It’s not required reading but you’ll have fun if you pick it up.

This issue really starts to pull it all together. For as much as last issue was setup, this issue starts all the stories moving along. Corben, Gilbert’s Mr. Monster, McNeil’s Finder, Chelsea’s Snow Angel all find their footing and continue on their merry way. Chaykin’s Marked Man was the best and I was surprised to realize just how much I am liking this story. A couple of new stories rounded out the book.
The Bad:

Adam’s work didn’t get any better and it another installment of reams of text with spot illustrations.
The Surprise Hit:
Patrick Alexander’s Dark Whatsit of the Underworld was hysterical. It’s a comedic, and twisted, series of shorts on everyone’s favorite caped crusader.


The Verdict:
Except for Adam’s disaster this issue is really solid. Unfortunately, you need the first issue to understand all the stories so a $16 entry fee is a wee bit steep. Other than that, this was the book that really got me hooked into the series. 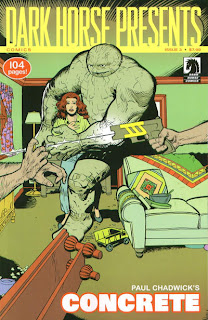 DHP #3-6:
The Good:
By this point, the series is really moving right along.
Chaykin's Marked Man has turned into an outstanding piece of noir.
Gilbert's Mr. Monster was just silly but fun.
Corben was Corben.
Robert Love and David Walker introduced a longer running serial "13" which was good too.  What really sets this apart is the art style, and sense of composition, which is distinctly different from the other series.
McNeil's Finder continued to add in solid one shots every issue too.
And, after all that, each issue had a stand alone story that was fun filler.
The Bad:
It might be Adam’s Blood but I couldn’t tell you because I stopped reading it.

The Series Verdict:
If you dropped this after the first issue then it's worth your time to go back and find the books.   It's an anthology and not everything was great but there's a whole lot of good, above average, and even a couple of very goods in each issue.  The series also does a great job of balancing a couple of on-going stories with one shots so there's always something fresh.  After a slow start, DHP has really developed into a book you should check out.