Lee: Many thanks to Jim for helping out last month but it’s time for the return of the original idiot… THOMM! Yeah Thomm. We’ve missed ya. Mostly missed ya.
Thomm: No idiot is more original no this site than our esteemed founder, Jim. Well, maybe his right thumb man, Lee. I cannot claim the honor. 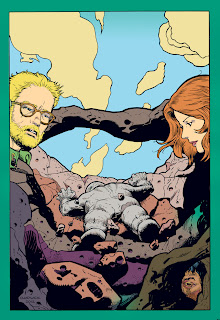 CONCRETE: THREE UNEASY PIECES
Paul Chadwick (W/A/Cover)
FC, 24 pages, One-shot , $2.99
One of the medium’s all-time greats is back in this collection of Concrete stories from the relaunched Dark Horse Presents! In three new adventures, the most human of heroes intervenes in a burglary that turns out to be much more, investigates a possible sighting of the aliens who gave him his rocky body, and develops an alternative to the Taser: himself. This issue strikes the perfect balance of inviting stories for new readers and character development for longtime fans!  Collecting the Concrete stories from Dark Horse Presents #1–#3!
Lee: I see that DH isn’t going to collect DH Presents as a single collection. Darn it! I should have supported it from the beginning. Oh well, I know Thomm loves Concrete so this pick is for him.
Thomm: And I have all the issues of the current version of DHP, so I already have these stories. And they were excellent, as always. Easily worth the $3 DH wants for these stories. 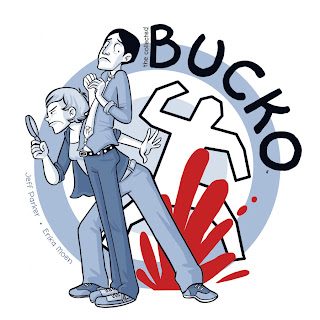 BUCKO HC
Jeff Parker (W) and Erika Moen (A/Cover)
FC, 136 pages, HC, 8" x 8", $19.99
After discovering a dead body in an office bathroom, hungover job interviewee Rich “Bucko” Richardson becomes suspected of the murder. What he thinks is a quest to find the real killer turns into a weeklong romp through the wilds of Portland, Oregon, complete with bike-mounted cover bands, steampunk Makers, Juggalos, SuicideGirls, meth heads, so much absinthe, and an entire city made of books. After taking the Internet by storm, Jeff Parker and Erika Moen’s dirty, funny murder mystery is now the most hilarious book in comic shops!  Includes brand-new strips, commentary, and info on the real-life inspirations for Bucko!Best new webcomic of 2011!  Read it here.
Lee: DH is starting to pilfer the internet for new offerings! There’s nothing wrong with that and I am all for seeing this material in print. I wonder if this will be how mid-size publishers manage to keep new material on the shelf in the future.
Thomm: Yada, yada. I’m not here for how the industry functions. This sounds like a very good book. I don’t care where DH is getting it. 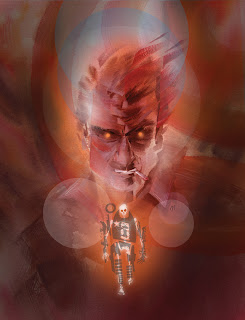 CRIMINAL MACABRE: THE IRON SPIRIT HC
Steve Niles (W) and Scott Morse (A/Cover)
FC, 32 pages, HC, 9" x 12", $19.99
A haunted veteran leads monster hunter Cal McDonald to a creepy subterranean military base where mad-science experiments were conducted on US soldiers.
Steve Niles (30 Days of Night) takes his occult detective into a new collector’s format with Eisner winner Scott Morse of Pixar and TR!CKSTER fame!  Printed as an oversized hardcover in a deluxe format.
Lee: Criminal Macabre is pretty good. It certainly has its ups and downs like any other series. I’m interested because I picked up the omnibii but I am not sure I am 32 pgs/$20 interested. Yes the book is huge but that’s really pricey.
Thomm: Exorbitant would be a better description. I’ve read a bit of Criminal Macabre, mostly in DHP, but there’s no way I’d pay this much for it. 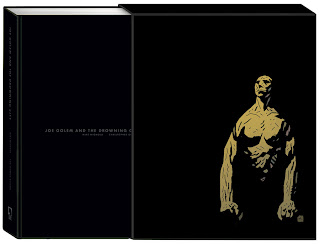 JOE GOLEM AND THE DROWNING CITY DELUXE HC
Mike Mignola (W/Cover) and Christopher Golden (W)
FC, 256 pages, HC, 7" x 10", $99.99
After a séance gone horribly wrong, strange men wearing gas masks and rubber suits abduct the aging psychic Orlov the Conjuror, sending his young assistant Molly McHugh racing through the canals of a submerged Manhattan.  As Molly flees her captors through a sunken city full of scavengers, her one hope comes in the form of two strange men: Simon Church, a Victorian-era detective kept alive by clockwork gears and magic, and his assistant, Joe Golem, whose mysterious past is hinted at in dreams of stone and witches.  The deluxe limited-edition collection features multiple illustrations, an exclusive print signed by the writers, and a handsome slipcase. Limited to 1, 000 copies.  Features the previously unpublished in print Joe Golem story “Joe Golem and the Copper Girl.”
Lee: And speaking of pricey! I love Mignola verse as much as the next guy but $100 is a bit steep for me. Actually, since I spent $100 to get the MetaBarons deluxe hc from Humanoids, I should be honest and say I don’t like Mignola enough to spend $100.
Thomm: I don’t think I like any book enough to spend $100 on one purchase. Comics is a fun and entertaining endeavor, not a bank buster. I’m sure I can get these stories in other formats for a lot less. And being Mignola I’m sure it’s well worth reading, just not at this price. 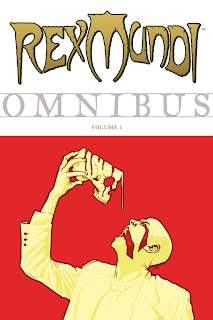 REX MUNDI OMNIBUS VOLUME 1 TP
Arvid Nelson (W), EricJ (A), Jim Di Bartolo (A), Juan Ferreyra (A/C/Cover), Brian Churilla (A), and Jeromy Cox (C)
FC, 584 pages, TP, 6” x 9”, $24.99
Paris, 1933. Europe is still in the grip of feudalism, sorcerers stalk the streets at night, and secret societies vie for power. When a medieval scroll disappears from a Paris church, Dr. Julien Saunière begins uncovering a series of horrific ritual murders connected to the Catholic Church. His investigation turns into a one-man quest to uncover the deepest secrets of Christianity, a trail of conspiracy that extends all the way to the walls of Jerusalem during the First Crusade.  Collects Rex Mundi Volumes #1-3.
Lee: Now this is an awesome deal. This series is great and this is a great way to read it all at once. It sags in the middle but most books do. If you like alternate history stuff, this is not to be missed.
Thomm: Yeah, this is right up my alley. I love alt history stuff. Throw in some exploration of early Christianity that’s likely to offend those who like their religion candy coated, and I’m sold. Seal the deal with that many pages for that low price, and it’s a great first date. 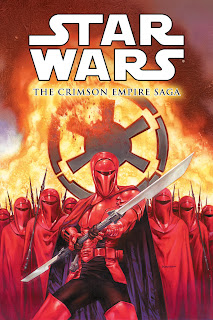 STAR WARS: THE CRIMSON EMPIRE SAGA HC
Mike Richardson (W), Randy Stradley (W), Paul Gulacy (P), P. Craig Russell (I), Randy Emberlin (I), Dave Stewart (C), Michael Bartolo (C), and Dave Dorman (Cover)
FC, 504 pages, HC, 6” x 9”, $34.99
The blood-soaked tale of the last surviving member of Emperor Palpatine’s Royal Guard is now complete in one dust-jacketed hardcover edition! From revenge to redemption, the story of Kir Kanos takes him from the deserts of Yinchorr, to the halls of Imperial power, and to the inner circle of the New Republic. Included are encounters with Darth Vader, Boba Fett, Luke Skywalker, and Leia Organa Solo. An epic tale in one epic tome! The complete Crimson Empire Saga in one deluxe edition!
Lee: This is the month of expensive hc’s from DH. Of course this is 500 pgs for $35 so that’s a really good deal. This was one of DH’s first Star Wars mini-series and I thought it was well received so it’s worth looking at. Please note this is a smaller manga sized.
Thomm: Not for me. I’ve never been into the Star Wars comics. I had a lot of the Marvel version back in the ‘80s but that was something that didn’t last, and I couldn’t tell you a single story out of those books.

Lee: Lots of lovely trades and hc's from DH this month.  Even though Thomm isn't interested the Crimson Empire stuff is really appealing.
Thomm: Rex Mundi looks like the best bet for me this month.
Posted by Lee at Wednesday, May 09, 2012