The Avengers Reading Initiative: Four Sets of Ones, Twos, and Threes (50 issues apart)

So last week in anticipation of the new Avengers movie coming out, I decided to get a jump start on my Avengers comic book reading.  It’s been a tradition of mine since the underrated 2003 Daredevil film came out to dive into my collection of back issues and hardcovers and read as much about the particular celluloid comic character until my interest starts to wane.  Say what you will about  Ang Lee’s Hulk movie, but both it and DD spurred the best reading runs to date (Iron Man did pretty well too).   Of course, the comic material in particular has a lot to do with my success (Miller’s DD, Trimpe’s Hulk, and Micheline/Layton’s Iron Man) or failure and up until a couple of years ago I didn’t have either the weekly blogging or at40 recording commitment (meaning I had more free time to read), which probably explains why I didn’t get very far with Captain America beyond the Omnibus.  While I don’t have a complete run of the Avengers, I do have the following: 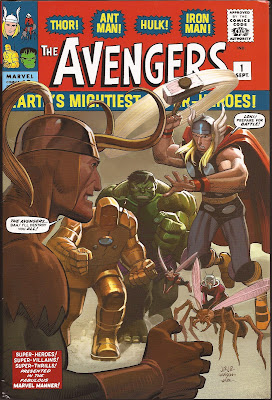 
The Avengers (1997): #1-64
Well, I decided to limit my reading to the pre-Onslaught stories, so that threw out the excellent Busiek/Perez run from 1997.  I also knew that I would be struggling to get through the oft-reprinted early issues and may NEVER get very far in the series, leaving scores of stories unread.  Then it occurred to me, why limit myself to one single era?

Thus, was born the Avengers Reading Initiative.  I began reading aloud Avengers #1 from the Omni to my youngest daughter, and then I read (silently to myself) issue #51, followed by issue #101, and finally finishing up with #151.  Rinse and Repeat.  I had hopes of reading #201 and #251 also (there was no way I was going to tackle #301 [time is too precious to waste]), but it just didn’t work out – maybe after I finish the first 200 issues, which is a good half-way point.  Anyway, I’ve already completed round two: #2, #52, #102, and #152 with the almost overlooked #1 ½  thrown in for completeness.  Round Three is well underway (actually just finished) and I hope to tackle the X-men issue preceding #53 tonight (or Friday a week ago your time).


Okay, Matthew.  That’s all well and good to know, but that’s doesn’t really address the COMICS! Hold your horses, already.  You didn’t think I was going to NOT mention some of the actual issues did you?  “Oh, ye of little faith.”


Avengers # 1, 1½, 2, and 3 (1963)
I’ve reread these issues probably more than most, what with the recently defunct Avengers Classic that only ran 12 issues (too bad, because it was supposed to be as successful as Classic X-Men).  They even are reprinting issue 1 AGAIN, this time with improved coloring.  So, even though it’s really familiar and much wordier than today’s books, I still like the stories.  It was the beginning and it’s fresh with potential along with more conflicts than the Defenders.  And we wouldn’t have the latest blockbuster without it.


Of particular note is the way they traveled cross-country to fight the Hulk (no Quinjets yet) in issue one.  It only takes several hours to get there.  Who knew flying ants had so much stamina?  And in issue two, the Space Phantom (disguised as Iron Man and with the same powers) rusts like the Tin Man when Thor brings on the rain.  It may not be Jack Kirby at his finest, but it still has a lot of good composition and plenty of action.  They had to use a lot more panels in those days.  My favorite line in issue three comes from Jane Foster in response to Don Blake closing the office early, because he’s “tired” (a ruse to change into Thor).  “Oh, Don, if only you didn’t pamper yourself so!  If only you were more rugged!”  It’s a pretty good battle issue though with the Avengers fighting both the Hulk and Sub-Mariner.  I can’t wait to reread #4 that may be my favorite Avengers issue EVER!


The untold tale from the 1½ issue published in December 1999 was really exceptional.  Written by Roger Stern and drawn by Bruce Timm, it has the Avengers fighting against Doctor Doom inside a really BIG ship.  It should’ve been included in the Omnibus! 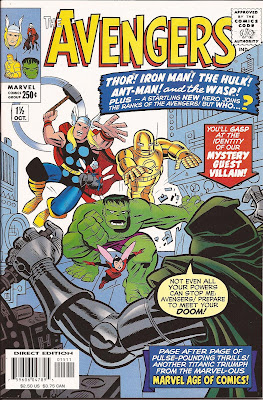 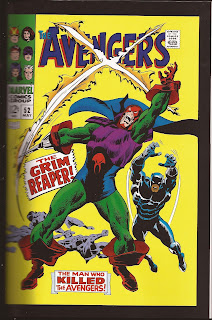 While this isn’t the exact beginning of the classic Roy Thomas and John Buscema run (why weren’t they included the movie acknowledgement credits?), issue #51 is a perfect place to start anyway.  In issue 51, Goliath gets his powers back and three Avengers hitch a ride into the upper atmosphere on an electrified comb to battle the Collector!  In the following issue, the Black Panther joins the team, but only after being arrested for apparently killing the Avengers (who were really knocked out by the Grim Reaper).  Here we have the beginning of the Reaper/Wonder Man plot that resurfaces again and again.  And in X-Men #45 and Avengers #53, we have the two teams fighting each other!  Where I have I seen that recently?  There are a LOT fewer Avengers and X-Men though.  Scarlet Witch is recovering from a head wound, so she’s not quite herself (the first of many such “spells”) and Magneto is almost unrecognizable as a crazed super-villain in desperate need of a Chris Claremont backstory. 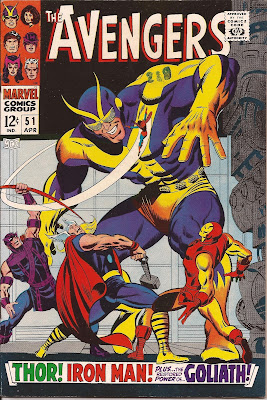 There are a lot of cool stories to look forward to in this run.  The coming of the Vision, Ultron, and the birth of Yellow Jacket!  I was first exposed to some of these tales in an old Marvel Treasury Edition and I’m looking forward to experiencing them again! 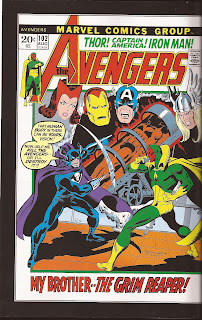 This is totally new ground for me as I’ve never read these stories before.  We’re nearing the very end of Roy Thomas’ tenure as writer, but now we’ve got Rich Buckler on board as artist.  I heard Rich was a mentor to George Perez, so his stuff looks really good, especially embellished by the awesome Joe Sinnott.  Issue #101 was adapted from a Harlan Ellison story and we’ve got a pretty solid team line-up of Thor, Cap, Iron Man, Hawkeye (in a ridiculous costume), the Vision, Quicksilver, and the Scarlet Witch.  The romance between the red syntheziod and the beautiful mutant is beginning to heat up (and Buckler is trying to draw her provocatively within the limits of the Comics Code).  The Grim Reaper appears in #102 (fifty issues after the last time), to tempt his “brother”, the Vision, into becoming human and betray the Avengers.  If you don’t remember, Ultron based the Vision’s personality on Wonder Man’s brain patterns.  Number 103 starts a multipart tale with them battling the Sentinels (a follow-up to an earlier Thomas X-Men storyline.) Steve Englehart starts scripting in #105, so I’m not sure what to expect next! 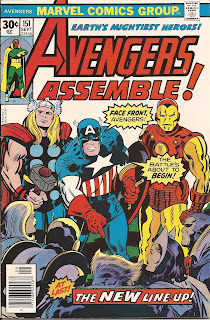 Although George Perez started in the late one-forties, THIS in my opinion is the beginning of the BEST Avengers run OF ALL TIME!!! And, it continues right through issue #202 with some exceptional John Byrne chapters along the way. This very week Marvel published #151-156 in one of their MPE HC editions, entitled The Private War of Doctor Doom.  Familiar ground for me, but it’s like watching a favorite movie or returning to your hometown.


This is the beauty of the Reading Plan, because I don’t have to wait to get to these issues.  I filled in the gaps in my collection probably half-a-dozen years ago, but I’m going to actually read them finally (I promise).  Issue 151 was a great “picking the roster “ tale with flashbacks galore and includes an awesome cliff-hanger of Wonder Man returning from the dead as a Zombie Zuvembie, claiming the Vision stole his mind (which he kinda did).  Then in the next issue, we get some voodoo action down on the Bayou with a couple of issue guest stint by Big John and Jolt’n Joe, featuring Chicken Man from the Indigo Girls song the Black Talon.   Buscema is at the top of his game here, but it’s so different from Perez that it almost appears to be a down-grade in art, even though Perez was not up to his top form yet.  This was a common problem I had back in the 70’s, discounting veterans for the newbies, when in reality all of them were top notch or about to be. 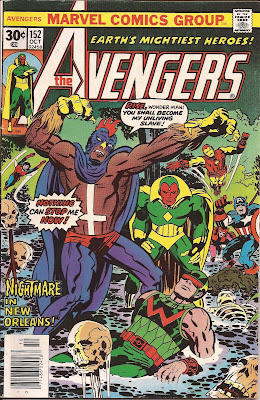 Issue 153 and the Annual comprise a two-parter featuring the Whizzer (what a terrible name) and his son, Nuklo.  At the time he was thought to be the father of Wanda and Pietro (makes since given his powers) too.  But my favorite aspect of this series is the resurgence of Wonder Man (really coming to life now) and his burgeoning friendship with the Beast (in his best incarnation).  I’ve always loved Wonder Man and the Vision and their clash will be coming to a head in just a few short issues.  Interestingly, both characters were rife with potential (and angst) at the time, but then when they “matured”, they became dull with the Vision domesticated and Wonder Man shying away from the hero biz and going more into acting.  Sometimes change isn’t a good thing, I guess.  Here, I can still relive the excitement as if it had just hit the stands! 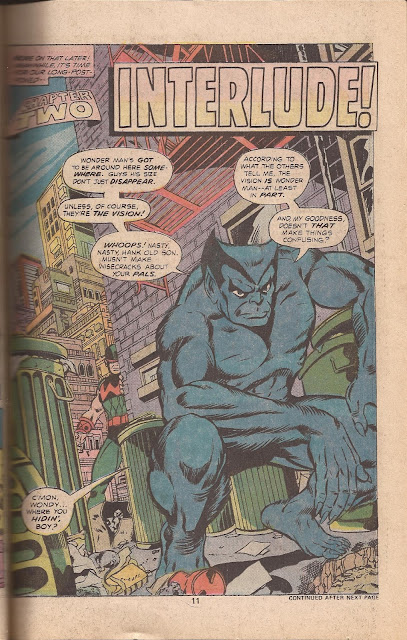 Email ThisBlogThis!Share to TwitterShare to FacebookShare to Pinterest
Labels: Back Issues, reading my HCs