I almost feel like I can legitimately call in the week in review because as of this writing I have read all the Marvel, Vertigo and other books I got this week and almost all of the regular DCU books.  The regular DCU stuff keeps falling to the bottom of my pile and that is because of the severe lack of interest I have in that stuff. In the last week I have few weeks I have dropped Batman The Dark Knight, Catwoman, Justice League, Superman and Green Lantern The New Guardians. DC’s is bringing back all of Bob Harras’ buddies from the nineties and those guys were never my favorites. Instead of DC trying to get all the new names popping up at Image, IDW and Dark Horse they have gone out and gotten Scott Lobdell, Rob Liefield, Tom Defalco and other writers who just are going to bring us the same song and dance. Plus DC seems to have a mandate to start every comic in the middle and then explain how the characters got there. Yes it is a nice story telling device to start with the action, but if you do it all the time it is no longer a story telling device, it is a house style and anything done to excess is boring. Marvel has problems because I’m tired of reading about the same people all the time, but that blandness of the big two was shattered by Grant Morrsion in Batman Inc and Matt Kindt in Mind Mgmt, both #1 issues. 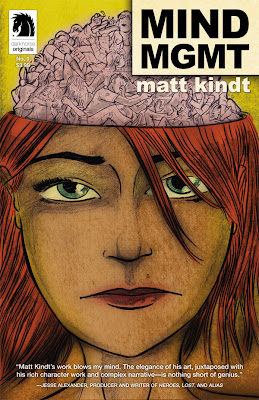 Mind Mgmt #1 by Matt Kindt was simply a great first issue in what has the potential to be an absolutely fantastic series. Matt himself no longer likes reading monthlies and he is trying to make a monthly comic that will keep us all coming back for more. As much as I would like to switch to trades in some things I remain an old dog and I will try out more stuff if the price point is lower, so the $3 to $4 range to see if I like a story is better then the $15 to $30 range for trades. Matt states some of the extras won’t be in the collected editions and I think that is a shame because if I buy a high end edition I want all the comic had and more. Still this book is full of story from the inside front cover to the back cover the book draws you into the world of Mind Mgmt. The first issue with a two page story tells you the origin (or alleged origin) of the super secret organization of Mind Mgmt. The actual story itself is about a young writer who is trying to solve a mystery of an airline that landed with everyone having amnesia. Of the 121 passengers who took off, 120 landed and were accounted for and she is looking for 121. The book is narrated by an unknown party. Mysteries abound in the book, she is being followed and chased with possible deadly intent and we have no clue what is going on, but boy do we want to know. On top of that every singe page in the story has a line on the side of the page telling us Mind Mgmt procedures. The top of every page leads us to believe the comic is actually a way that the Mind Mgmt agent is filing their report. Matt’s art is not realistic, but he is a great cartoonist and knows how to tell a story. I read once that if you can tell what is going on by just the art, that is a good comic book artist, Matt is exceptional. He has me hooked with a complex story, a compelling narrative and a concept that is obviously well thought out and has a deep back story. 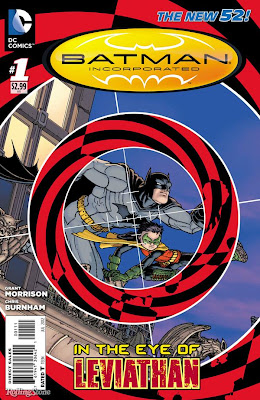 The next book I want to mention this week is Batman Incorporated #1. Grant Morrison was forced to bring this concept in line with the new DCU and this issue he jumps back into his story with both feet and makes some quick adjustments to make it reflect the new DCU, but in many ways he just ignores the whole change and keeps rolling forward with the story he had in mind. Joined by artist Chris Burnham this book is a masterpiece and is on par with the new Batman series and I think surpasses it in some ways because I love Chris Burnham’s art over Greg Capulllo. Story wise Grant and Scott and telling very different stories, although both are about vast conspiracies that Batman is facing. Grant starts with Bruce Wayne (one month ahead) being arrested and telling Alfred to end the entire Batman thing and shut it down and ends with Batman holding Damian who we are lead to believe has been shot in the head. In-between with have father and son dynamics, the introduction of Bat Cow, assassins, high speed car chases, blood soaked fights, Batcave West and Batman getting shot in the face. Scott Snyder crafts great stories, but Grant infuses such manic energy into his work that each page has story ideas that could be used somewhere else down the road. Grant’s work reminds me of a more sophisticated version of Lee and Kirby’s early Marvel work, where the ideas were fast and furiously thrown out there but all in service to the story to be told.  This was just a brilliant effort by Grant and superior art by Chris.

The rest of week that I read were for the most part good books but a lot of middle chapters or stuff that while it provided entertainment it was not stuff that made me want to share my joy or complain about poor execution. One thing I will say is that Avengers vs X-Men thing has caused some of the ancillary series I get that features those teams to be drawn into this cross over. The stories in these books are usually boring or redundant. But hey, sales are sales I guess. Of course with Before Watchmen coming out and the stupid zero issues from DC in September the sales wars are in full bloom. A final note to DC, the zero issues are a little late in the game for me as I’m off half of the 52 already.

Come back next Monday and stop in tomorrow as I have a commentary on the “big” story for Marvel and DC in June.