Indies Previews For July Part 1 of 3

Lee: I can't believe another month has gone by.  It's suddenly summer and previews are starting to get thin.  Oh well, makes it easier to pick books!
Gwen:If my comments are somewhat I apologize. With the school year coming to an end my work is rather hectic at the moment. 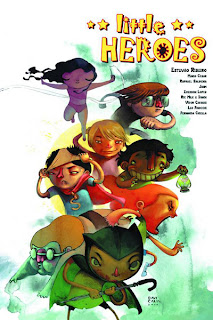 215 Ink
Little Heroes GN (w) Estevao Ribeiro (a) Mario Cesar (c) Anderson Nascimento
This award-winning Brazilian graphic novel is now being released internationally for the first time ever. Little Heroes is the story of the everyday adventures we encounter and the moments when we discover the meaning of true courage. Because while everyone may dream of strapping on a cape and flying off to save the day, true heroism isn't something exclusive to superhumans and demigods. $10.99
Lee: Let’s start the month off with something feel good! And it doesn’t look any more feely-goody than this. The art looks crisp with almost a graphetti artist vibe and the stories sound heart warming so what’s not to like about this?
Gwen: Feel good seems to work for this. It looks cute.

5 more below the break!  Check it out.

:01 First Second
Bloody Chester GN by (w) J T Petty (a/c) Hilary Florido
This isn't John Wayne's heroic Old West. This is the real deal: a filthy, disease-ridden frontier populated by losers, lunatics, and murderers. And when you're a skinny teenager with no family and a name like Chester Kates, your options are limited. It's stand up and fight or roll over and die, so Chester, aka Lady Kate, is set to fight until it kills him. Chester is hired to ride his horse to a ghost town and burn it to the ground - except the ghost town doesn't just boast a tidy collection of mangled corpses: it also has three living inhabitants who won't be budged. But Chester's been hired for a job, and he'll be damned if he doesn't burn the town to the last cinder! 160 pgs, $18.99 Visit FLorido’s blog here and here official site here.
Lee: I love :01 Second and this looks to be a fine addition to their line of books.  They always seem to find new and different things that appeal to just about everyone.  Even though this appears to be horror based, I betting there's far more to the story than meets the eye.  I'm sold.

Gwen:I don't know if I'd put this in a horror genre Lee. Regardless it looks like something different if nothing else. I'd like to take a closer look.

Whatever Happened to the World of Tomorrow? SC by (w/a/c) Brian Fies
Whatever Happened to the World of Tomorrow? tells the story of a young boy and his relationship with his father from the 1939 New York World's Fair to the last Apollo space mission in 1975. Told through the eyes of the son as he grows up in an era that is optimistic and amibitious, fueled by industry, engines, electricity, rockets, and atoms, it is an insightful look at relationships and the promise of the future, presenting the story in a way that only comics and graphic novels can. 208 pgs, $14.95 Visit Fies here and you can see how the cover was chosen and read all about the making of the book.
Lee: This isn’t new and you can get it from Amazon right now! No waiting. Originally published back in 09 apparently it’s going back to print. Or getting a larger print run. It was well received and worth investigating if you missed it the first time.
Gwen:This seems nostalgic if nothing else. It doesn't really appeal to me on a personal level but seems to have a solid reviews.

Archaia Entertainment LLC
Thieves And Kings Vol. 01: Red Book GN (Archaia Ed) by (w/a/c) Mark Oakley
This is the story of Rubel, sworn thief to the beautiful princess Katara of Asaria, who must make his way through the politics and power struggles of the city of Highborn in the land of Oceansend amongst soldiers, pirates, kings, and magicians; all while avoiding Soracia, the Shadow Lady and Queen of Halves, an immortal sorceress who seeks to capture his soul. Joined by Quinton, an ancient wizard, and his young girl apprentice, Heath Wingwhit, Rubel must chart a path through demon traps, poisonings, dragon dreams, the plots of mad princes, evil sorceresses, trolls, and monsters of every ilk, all while trying to restore the princess to her rightful throne. 154 pgs, $24.95.  Visit Oakley here and read his current webcomic Stardrop.
Lee: This is another series that has been in print for a very long time but I havne't managed to read.  People who have read it seem to love it.  It has the Akiko, Bone young adult vibe going which is perfect for my house these days.

Gwen:This looks excellent. I may just have to pick it up at some point in the near future.

A professional. A man of few scruples, nerves of steel and a steady trigger finger. A man whose crimes might be catching up with him. A man on the verge of cracking. Archaia presents The Killer, a hardboiled, noir series first published in France chronicling one man's journey through some seriously bad mojo. This omnibus collects the Eisner Award-nominated The Killer Volumes 1 and 2. 312 pgs, $24.95
Lee: Ok, it’s no mystery that Jim and I love the Killer. I have all the collections and have enjoyed each one. But, I have to say I feel slightly screwed by this. I would have loved an Omnibus. I would have purchased this if I didn’t already own it! I’m used to the big two doing multiple versions of the exact same material, not the little companies. No matter, it’s a great story and this is a great way to read it if you haven’t already done so.
Gwen:The Killer is a good story but I still have the single issues so I don't feel pressed to have any collected versions as it's not that large of a series.

Boom! Studios
Operation Broken Wings 1936 SC by (w) Herik Hanna (a/c) Trevor Hairsine
Artist Trevor Hairsine brings you WWII action like you've never seen before! It's 1936. A German intelligence officer is tortured by his superiors. They want to know why he has turned against them. Imprisoned, he gives up nothing as he seemingly waits for death...or the right time to strike! Written by Herik Hanna and drawn by Trevor Hairsine, Operation: Broken Wings, 1936 gives you deadly intrigue and bone-crunching action exactly as you like it! Collects the acclaimed mini-series and features additional commentary and artwork by artist Trevor Hairsine! 64 pgs, $9.99
Lee: And this is how you read material from Hairsine.  He's a great artist but boy oh boy does he not like deadlines.  He's part of that wonderful clic that's never seen a deadline they couldn't miss.  The problem is that his art is sooooo lovely.  This should be pretty and the story sounds good enough that I'll check it out.
Gwen:I like getting spy books for my husband. But lets face it Lee, if the art is shiny enough you don't need much story!