Indies Previews For July Part 3 of 3 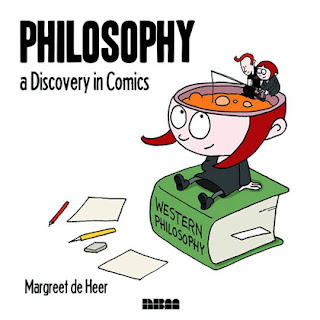 Philosophy: A Discovery in Comics HC by (w/a/c) Margreet De Heer
A fun introduction in comics to deep thinking and the history of Philosophy! What is Thinking? And how does our thinking set us apart from other animals? Now that we're thinking, what is Reality? Is there an objective reality or are there numerous subjective realities? And do we move in it with a free will or is everything predestined? Socrates, Plato, Aristotle, Erasmus, Descartes, Spinoza, Nietzsche: just a few philosophers who have pondered these questions. Comic artist Margreet de Heer and her husband Yiri travel through the history of Western Philosophy and draw a colorful picture of all these questions. 120 pgs, $16.99
Lee: This could be good but it has to compete with Action Philosophers.  Actually, this will probably be better and more educational.  Maybe it owes some thanks to Action Philosophers because before that book I would never have considered this.
Thomm:  Action Philosophers is a lot of fun.  Can you get too much comic book adaptation of philosophy discussions?  Different artistic interpretations alone would be worth the visit.  Plus, this is  a European perspective that might differ from the American Action Philosophers.

The final 4 below the break!

Oni Press Inc.
Scott Pilgrim Color Vol. 01: Precious Little Life HC by (w/a/c) Bryan Lee O'malley
Just when you thought you knew all there was to know about Scott Pilgrim comes Scott Pilgrim Color Hardcover vol. 1: Precious Little Life! The first in a series of brand new hardcover editions, this FULL COLOR, remastered, 6x9 hardcover presents Scott's first evil ex battle as you've never seen it before! Plus, previously unpublished extras and bonus materials make this mighty tome one that's required reading for Scottaholics everywhere. 192 pgs, $24.99
Lee: Hey look, Scott Pilgrim in now in color.  HURRAY!  Actually, I wonder who this is for because most of the people who love it have already read it.  Is it opening a new market or just trying to suck more money outta the hardcore Scott P- fans?  I don't know.
Thomm: I've never read any of the Pilgrim, so maybe it's trying to target me?  I dunno.  I'm not going in for it because what I've read about it so far hasn't piqued my interest. 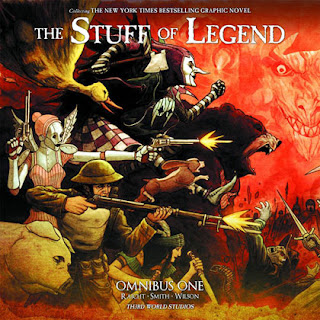 Th3rd World Studios
Stuff of Legend Omnibus Vol. 01 HC by (w) Brian Smith (a/c) Charles Paul Wilson
This hardcover collection brings together the first two volumes of the New York Times bestselling graphic novel The Stuff of Legend, The Dark and The Jungle, in one beautiful 260-page edition. As Allied forces fight the enemy on Europe's war-torn beaches, another battle begins in a child's bedroom in Brooklyn when the nightmarish Boogeyman snatches a boy and takes him to the realm of the Dark. The child's playthings, led by the toy soldier known as the Colonel, band together to stage a daring rescue. On their perilous mission they will confront the boy's bitter and forgotten toys, as well as betrayal in their own ranks. The Stuff of Legend is a haunting and ultimately redemptive tale of loyalty, camaraderie, and perseverance. 260 pgs, $29.99
Lee:  Now this is what I have been waiting for.  I don't know if I missed the first release of this or not but I'm getting this.  We've been fans since day one so let's continue the support.
Thomm: Hard to believe we were in on the ground floor on this all those years ago.  I'm not an HC guy, so this isn't for me, but the contents are well worth the read if you haven't done so already.  A great fantasy tale of childhood nightmare.
Gwen: I already got the softcover version for my husband, but I love this material. 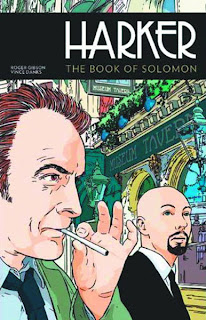 Titan Books
Harker Vol. 01: Book of Solomon SC by (w) Roger Gibson (a/c) Vincent Danks
When a series of gruesome cult killings take place near the British Museum in London, DCI Harker and his assistant DS Critchley are called to solve the case. Middle class satanists, dusty old bookshops, a labyrinth under the museum, a frantic car chase and wry, cutting humor all combine in this love letter to classic British detective television series. Collects issues #1-4 of the previously self-published Harker comic! 104 pgs, $19.95
Lee:  This was a very well received English crime noir story that's finally being collected for American audiences.  Danks art looks good and the story sounds good so it's worth a chance.  Whenever I pick books like this, I can't help but remember that Bendis started in this exact same format.  Not saying this is the next Bendis... but one ever knows.
Thomm: Do I have to do the accents in my head?  I generally like British crime fiction so this is a good one for me.  Price isn't bad, either. 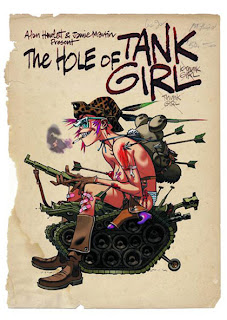 Hole of Tank Girl Slipcased Collected Edition HC by (w) Alan Martin (a/c) Jamie Hewlett
Bringing together all the classic Hewlett and Martin Tank Girl comics for the first time in this fantastic oversize slipcased edition, with additional materials including original art, unseen Hewlett pages, a lost original Tank Girl story, and the first new Hewlett Tank Girl artwork created in over 15 years. Each copy is signed by creator Alan Martin. This is a wonderful collection that marks Tank Girl's 25th anniversary, and no comic book fan should be without it! 384 pgs, $99.99
Lee: I was never a huge Tank Girl fan but the fanbase is sooo rabid for her that I always want to try more.
Thomm: Like Pilgrim, I've never read a single one of these.  This type of collection isn't the place to start for me.  Too much all or nothing.  A trade would be more to my liking, and I'm sure there are plenty of those out there.

Gwen: I am not much of a tank girl fan but I'm sending a link to this book to my former boss - she's such a big fan she has a tattoo from Tank Girl!

Thomm: Is Lee's personality really that bad?  I'm the third co-pilot on this three part series.  You be the judge.
Gwen: We've had so many people commenting this month it's turned into a party!
Lee: HA Gwen fooled ya! She still likes me... mostly.
Posted by Lee at Thursday, May 24, 2012