Indies Previews For June Part 3 of 3

Lee: What a messed up month this is. Work got out of control so this intro paragraph isn't showing up until the final day of indies.  Sheesh.  But, it's been a great month with lots of cool books and this last batch is no exception.  Maybe we'll be more organized next month.
Gwen:I just assumed we weren't doing an intro =P 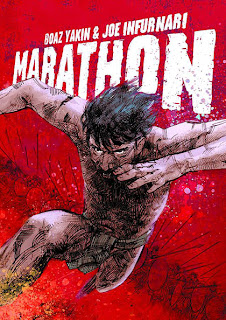 :01 First Second
Marathon GN by (W) Boaz Yakin (A/C) Joe Infurnari
It was a turning point in ancient history. It inspires men to greatness. It was the foundation of one of the greatest and most prevailing global peace efforts of the 20th century. It was the greatest feat - and the tragic death - of a man whose legacy will never be forgotten. In 490 BCE, an Athenian messenger named Eucles ran 27 miles from Sparta to Athens, and in so doing preserved ancient Greek civilization from subjugation to the Persian Empire. $16.99
Lee: Let’s start with something that just looks cool and should be a winner. Why? (1) :01 Books is a great publisher of indie material. (2) Infurnari is an awesome artist. And finally (3) it just sounds interesting.
Gwen: Except I'm pretty sure most people don't know this story at all. Seeing how classical history isn't focused on very much anymore. This is a cool story and all but I'm worried it'll get over exaggerated like the 300.

The rest are below the break 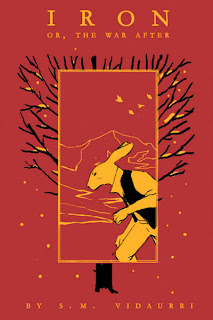 Archaia Entertainment LLC
Iron or the War After HC by (W/A/C) Shane-Michael Vidaurri
It is the aftermath of a long war, in a world of constant winter. An intelligence spy from the Resistance - the rabbit, Hardin - steals secret information from a military base of the Regime. His actions set off a chain of events that reverberates through the ranks of both sides, touching everyone from Pavel the crow to Giles the goat, from the highest-ranking officials to the smallest orphaned child. When the snow finally settles, who will be the true patriot and who the true traitor? A spellbinding, beautifully illustrated anthropomorphic tale. 160 pgs, $24.95 Visit the artist here and the official book site here.
Lee: I’m getting a Mouseguard vibe off this book. Could be because it has animals in the lead. Could be the adventure type tale. Might be the fact that it’s the same publisher. Whatever it is, you saw it here first so you can miss it like you did Mouseguard or get in on the ground floor like the rest of us cool kids!
Gwen:Being from the same publisher I'll probably get all attached and then not see a book for months on end *sigh* At least it's not a monthly this time. 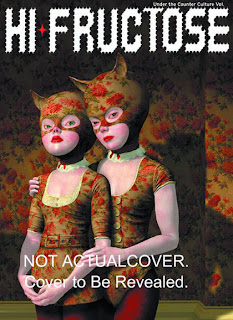 Atta Boy
Hi-Fructose Magazine Quarterly #24
Hi-Fructose, the critically acclaimed new contemporary art magazine returns this summer with Volume 24! Hi-Fructose showcases an eclectic mix of underground artists, pop surrealists, emerging and rediscovered counter cultures, and awe inspiring spectacles from around the world. Hi-Fructose's beautiful layouts feature in-depth features and interviews with cutting edge artists, creators, and many many surprises yet to be revealed all jam packed into one place! Always with special surprises and highly collectable, the best selling Hi-Fructose is not to be missed. $6.95
Lee: It should be obvious that I am an art guy! But, my love of art isn’t limited to comics it also crosses over into contemporary art too. This is one of the better magazines out there if you like alternative art. I mentioned it this month because the cover is just too cool for words. I love the fact that the costumes match the wallpaper.
Gwen: But that's not the actual cover Lee... 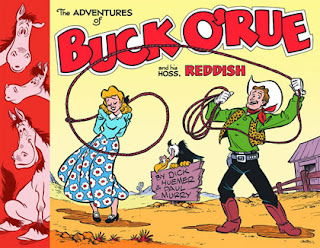 Classic Comics Press
Adventures of Buck O’Rue SC by (W) Dick Huemer (A/C) Paul Murry
Classic Comics Press presents The Adventures of Buck O'Rue by legendary Disney-ites Dick Huemer and Paul Murry. On hiatus from the Studio in 1951-52, Huemer enlisted Murry to create this sendup of the great American Western. Compiled from multiple sources including original Photostats, The Adventures of Buck O'Rue encompasses the run of the strip from January 15, 1951 to December 7, 1952. The book features a forward by Don Peri, author of Working with Walt, as well as biographies, photos, promo art, creators' notebooks and sketches, and more. $29.95 You can visit a site dedicated to the character and read a couple of dailies here.
Lee: This is interesting because it was such a short lived strip. Huemer had gotten laid off from Disney, and this strip was his way to support the family until he eventually got rehired by Disney. It’s got solid art and a pretty good story which makes it fun.
Gwen:I like how they say he was on hiatus instead of fired in the synopsis. 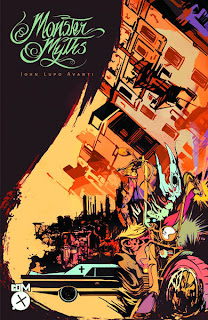 Com.x
Monster Myths GN by (W/A/C) John Lupo Avanti
Alfredo, a recovering felon turned working stiff, resides in Lower Scabo where working-class people live under the tyranny of the evil Cannibals Motorcycle Gang. After being beaten and left for dead by the gang, Alfredo decides to recruit a group of graffiti writers to instigate a war between the riff-raff of Lower Scabo and their neighbors in the well-to-do community of Northview. In doing so, Alfredo transforms from a two-bit perp into an iconic rebel, determined to free Lower Scabo from the control of those seeking power. 120 pgs, $13.99 Visit the artist site here.
Lee: This is definitely what I call a stretch book. It’s either gonna be really good, or really bad, and it may or may not ever get released. Avanti’s style is very interesting and he’s a very good artist. I just don’t know if he can tell a sequential story. Add that to the fact that Com.x is spotty as a publisher and it’s a stretch if we’ll ever actually see the book. I’ll probably order it and be really surprised when it shows up.
Gwen: This has an interesting concept but the art is a little stylistic for my tastes. We'll see what Lee has to say if it surprises him and shows up. 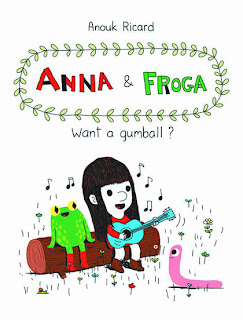 Drawn & Quarterly
Anna and Froga: Want a Gumball? HC by (W/A/C) Anouk Ricard
Anouk Ricard's Anna and Froga features the adventures of a little girl named Anna and her gang of animal friends. Anna's best friend is the titular Froga, and they often hang out with Bubu the dog (an aspiring artist), Christopher the gourmand earthworm, and Ron (a practical joker of a cat). Whether the conflict is driven by eating too many French fries, bossing around Johnny the Tuna, or trying to beat a difficult video game, you know that Anna, Froga, Bubu, Ron, and Christopher will come out all right in the end, which makes the layers of confusion they pile on one another all the funnier. Ricard's characters are sweet without ever veering into preciousness, as they constantly find opportunities for a laugh at one another's expense. $14.95 Visit Ricard here and look at all the pretty samples. And I mean look unless you can read French.
Lee: This looks like a highly sarcastic, humorous take on life. I can read just enough French to let you know that it’s pretty funny. I think the perceived simplicity of the art is going to turn people off but it’s definitely worth checking into.
Gwen:Well at least one of us on the blog can read some French. It does look cute but I'd have to see more in English. 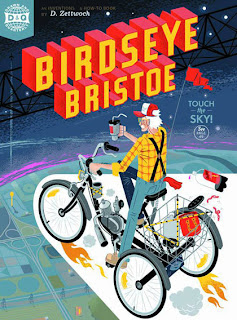 Birdseye Bristoe HC by (W/A/C) Dan Zettwoch
It's a storyline we know all too well: A mysterious stranger comes to town. Only the town is not really a town and the stranger is a gigantic cell-phone tower. The town is Birdseye Bristoe - a portmanteau name created from an interstate sign that points to two real towns - and it has only one real permanent resident, an old-timer known as Uncle. His teenaged great-niece and -nephew visit occasionally, though the town doesn't have much to offer apart from an adult superstore, a gas station, and a tackle shop. Birdseye Bristoe brims with larger-than-life personalities, hilarious anecdotes, references to midwestern/mid-southern pop culture, and diagrams of the cell-tower/cross-construction process. $19.95 Visit Dan and read his comics here.
Lee: If this is anything like Zettwoch’s other works “The Cheap Bastards Ultimate Guide to Eating Like a Total Cheap Bastard in Dallas” (see here) then I am sold.
Gwen: Umm, who runs these stores if there's only one permanent resident? Also, in a tiny town why is one of the only businesses an adult bookstore? That seems a bit strange. 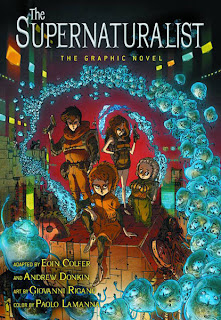 Hyperion Books
Supernaturalist HC by (W) Eoin Colfer (A/C) Giovanni Rigano
Unwanted by his parents, Cosmo Hill is put to work by the state, testing highly dangerous products. Cosmo realizes he must get away, and escapes with the help of the Supernaturalists, a group of kids who have the same special abilities as Cosmo--they can see supernatural Parasites, creatures that feed on the life force of humans. The Supernaturalists patrol the city at night, hunting the Parasites in hopes of saving what is left of humanity in Satellite City. But soon they find themselves caught in a web far more complicated than they'd imagined, and they discover a horrifying secret that will force them to question everything they believe in. With stunning art and nonstop thrills, The Supernaturalist: The Graphic Novel will delight fans already familiar with the story and dazzle readers discovering it for the first time. 128 pgs, SC: $10 hc $19.99
Lee: I can tell you the art in this book will be spectacular. Rigano worked in animation for Euro Disney, and did the Daffodil series which was reprinted under Marvel’s Soleil line. He’s really really good. As for the story, it appears to be standard YA fare. I’ll probably go with the sc because it’s hard to go wrong for $10.
Gwen: I really like the concept here, this book looks like it should be good.