Lee: This is a huge month for IDW so no intro, just books books books.
Thomm: I read the Previews and the number of books seems about the same. I’m thinking it’s just a big month for peaking your interest. 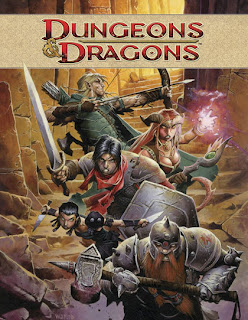 Dungeons & Dragons Vol. 01: Shadowplague SC by (W) John Rogers (A) Andrea DiVito (C) Wayne Reynolds
Join writer John Rogers (Blue Beetle) and artist Andrea Di Vito (Annihilation) as they bring us a tale of high adventure and deep secrets. Adric Fell leads a band of heroes in a world where civilization has been reduced to a few scattered points of light amid a rising tide of shadows. $19.99
Lee: If you had told me 6 months ago that this would interest me, I would have laughed at you. But here I am getting ready to order this. There’s been steady praise from several of the reviewers I read about this series. If it had been one I would have ignored it, but 3 or 4? I’ve gotta try it now.
Thomm: You do that. I read some D&D non-picture books long ago. That pretty well got the whole D&D thing out of my system.

Six more books below the break... 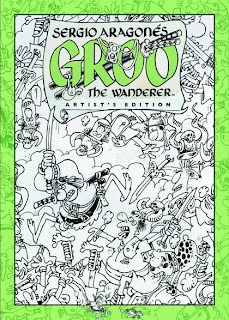 Aragones’ Groo The Wanderer HC (artist edition) by (W/A/C) Sergio Aragones
To call Sergio Aragones a legendary cartoonist would be an understatement. Besides being in every single issue of Mad Magazine for the past 50 years, Sergio is also the creator of Groo the Wanderer, the hilarious character that is a good natured and extremely honest barbarian, but one who consistently finds himself in the middle of all sorts of misadventures because of his unparalleled stupidity and penchant for misunderstanding. IDW is pleased to offer the one and only Sergio Aragones' Groo the Wanderer: Artist's Edition, featuring a glorious four-part story showcasing Sergio at his best. $100
Lee: This series now reminds me of TwoMorrows Modern Masters books. Why? Because after you get through the first 4 or 5, WOW gotta have that books, you end up at second tier stuff. Nothing against Aragones. I love his work and I love Groo. But do I need to spend $100 just to see his pencil work? Uuuummm, that I am not sure about.
Thomm: Aragones is great and Groo is a fun character, but $100 is not going to get me involved with this. Even a half-price sale would be problem. 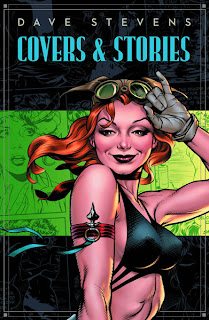 Dave Stevens Stories & Covers HC
Dave Stevens was renowned for his work on The Rocketeer, the beloved comic that introduced the world to Cliff Secord and his incredible rocket-pack. But Stevens was also one of the most sought-after and accomplished cover artists in comics. This collection will provide a comprehensive gallery of Dave's covers, with many of them scanned from the original art. Additionally, there will be cover roughs to accompany many of the covers. Finally, All of Dave's non-Rocketeer comic work will be presented, including incomplete and unpublished stories. As with the other books in the Dave Stevens IDW library of titles, this one is a must have for fans of great art! $49.99
Lee: Let’s just start by saying I will be getting this. It will be excellent. Steven’s covers are just fanastic. As for the stories, well that all depends on the writer. Since most of his work was done for Pacific, and other small press books, it will be very hit/miss. Did I mention how pretty the book will be?
Thomm: Sucked in by the pretty again. You’re an easy target. I’ll pass. 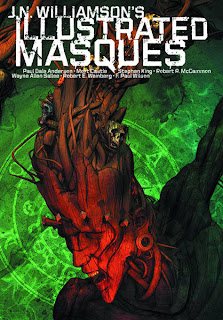 Illustrated Masques SC
Wayne Allen Sallee, Robert R. McCammon, Mort Castle, Robert E. Weinberg, F. Paul Wilson, Paul Dale Anderson, Stephen King (w) Clive Barker, Andy B. Clarkson, Cristina de Lara Stockler, Daniel Indro, Mike Okamoto, Ted Naifeh, Tim Vigil, Mark Evans, Apriyadi Kusbiantoro, Jose Pimentel, & Matt Thompson (a) Fabio Listrani (c)
Scare me! From 1984 through 2006, such writers as Stephen King, F. Paul Wilson, and Robert R. McCammon did just that in five volumes of MASQUES, creating classics for the darkest nights of the darkest souls. 128 pgs, $19.99
Lee: Ok, after lots of research it turns out that Masques was a horror anthology series published from ’84 to ‘06. I’m always up for a good horror anthology but I’m pretty unfamiliar with all of the artists. IDW always seems to have strong horror titles but this will be a last minute add if I don’t the budget in other places.
Thomm: Yeah, not my cup of tea. Anthology horror is generally hit or miss for me. I’ll miss this effort. 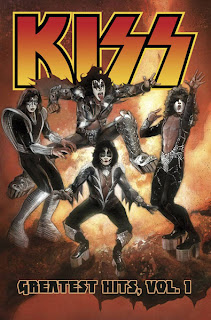 Kiss Greatest Hits Vol. 01 SC by (W) Stan Lee (A) John Buscema (C) Nick Runge
In 1977, Kiss was not only the biggest band in the world, they were the biggest comic-book stars around! For the first time ever, both classic Marvel Super Specials are collected in one in trade paperback, with story and art from Stan Lee, John Buscema, John Romita Jr., and more! Featuring an all-new cover recreation by Kiss: Avatars cover artist Nick Runge! $19.99
Lee: This is another prime example of they will reprint anything these days. I don’t have the originals but from what I’ve read, and heard… they’re bad. If you like Kiss, maybe it will be fun. But for the rest of us… ugh.
Thomm: Oh, man. This stuff was terrible. I didn’t buy it but I remember reading a friend’s copy. Just abysmal. 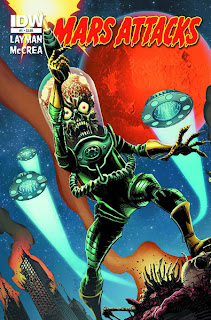 Mars Attacks #1 (W) John Layman (A/C) John McCrea
The invasion begins! The first stories of an all-new MARS ATTACKS universe are here, bringing outrageous action and dark humor to the comics page. Eisner-winning writer John Layman (Chew) is joined by Eisner-winning artist John McCrea (Hitman) to sound the alarm. Beware! The Martians are coming! $3.99 (NOTE: Ships with 55 covers.)
Lee: I love the cover. I love Layman. I love McCrea. I am pretty sure I will love this. I am not sure that I love 55 covers. Holy poop… 55?????
Thomm: What is the point in 55 covers? Is it an inside joke on other companies’ penchant for multiple cover sucker ploys? Is it a serious attempt to get someone to buy all 55? Anyway, my only experience with this is with snippets of the movie. Not really calling me, though I understand the movie is a pale comparison, at best. 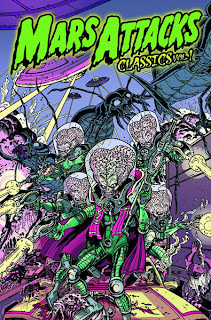 Mars Attacks Classics Vol. 01 SC by (W) Keith Giffen (A) Charlie Adlard (C) Nick Bradshaw
Mars Attacks Classics brings back your favorite comics from the past. This volume collects the first five-issue miniseries from Topps Comics, and features stories by beloved creators like Keith Giffen, Charlie Adlard (The Walking Dead), and more! $19.99
Lee: And this is an interesting book because it just might be good. I know, I know, the only reason it is getting published is because of the regular series…. But it’s got Giffen. Granted that’s hit/miss. And it’s got Adlard who’s always good and sometimes great. I’m gonna get it because I can’t help myself. I just hope I don’t regret it.
Thomm: You’re a weak, weak man.

Lee: And a huge month it was. I am curious to see how Mars Attacks does because the media push is gonna be big. Still… 55 covers????
Thomm: I gotta say, Aragones is the best bet here, so far as I’m concerned.
Posted by Lee at Wednesday, April 18, 2012