Falling Behind Again and the Digital Revolution

Alas I have managed to catch up on most categories of comic reading only to fall behind yet again. I belong to a book club and next week-end my wife and I are going on a short getaway to celebrate our eight year anniversary, for those of you playing along at home, this not my first marriage. Those things and my unrelenting real job continue to push my comic book reading to the back burner. Next Monday I have an interview running with Alex Sheikman writer/artist of Roboticka, artist on Dark Crystal, a Mouse Guard short and more. Alex is slowly becoming a name that more and more people will come to recognize as a great talent in the field and he is a heck of a nice guy.
On the comic book front my top priority reading has become the independents and Image has been launching title after title after title. With books like Chew, Luthor Strode, Hell Yeah, Danger Club, America’s Got Powers, Thief of Thieves, Morning Glories, Secret, Fatale, Manhattan Projects and more I have gotten into the habit of wanting to read their books first. 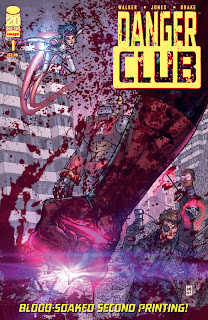 Danger Club #1 was a great start to a new mini-series. You have to remember that the model for many books is to do a mini-series and if it sells to do a second series and on and on as long as the run last. BPRD has to be the gold standard as that series has well with over 80 individual issues to its credit. Like most books Danger Club is a derivative of what has come before with analogs of Superman and Batman, except done as a Teen Titan type of thing. Derivative does not mean bad as some of the best series ever done were built on what has come before like All Star Superman, Planetary, Watchmen, Dark Knight and basically every super hero book on the stands. Danger Club has the Batman analog character getting his ass kicked by the Superman analog character until the Batman like character pulls the rabbit out of his hat and takes out the super powered guy. They are all the younger heroes as their mentors were killed and the kids went Lord of the Flies on us. Robin (or whatever he was called) took out the power mad Apollo (no copyright can be obtain on that name) and told the kids, whatever killed our mentors is still coming, get onboard or get out. The story by Landry Jones grabbed me from page one and while the art by Eric Jones will not be award winning it told the story and had some great shots mixed in. That sounds like faint praise for Eric Jones, but the work was good, but I just get the sense he is only going to get better. What was also nice is I just dropped Teen Titans off my list and this book rocks while Teen Titans was stale even with the fresh coat of DCU paint that was put on it. I see DC under Harras going backwards and Image is rocking our world with fresh takes on things. This is book that deserves your attention. 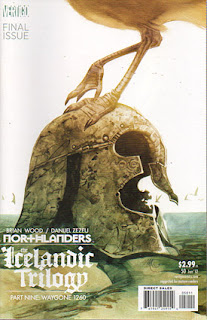 I want to make a quick mention of Northlanders #50, the final issue by writer Brian Wood, artist Danijel Zezelj and colorist Dave McCaig. What a great ending to what was a great series. Every arc focused on a different character and the stories of Vikings and the times of Viking brought to life an era that I always was fascinated by when I was a child. There is more to admire and more to abhor about these peoples and the way they lived their lives, but we should never judge through the prism of time. It is a shame that DC has let Brian Wood go as he is now doing great work for Marvel and Dark Horse. Not sure if I will follow all of Wood’s Marvel work, but I understand the need for a better paycheck. If you passed on this series collect the trades as you will get great stories and great art. I believe Dave McCaig colored every issue which made the series as a whole have a coherent feel to it. The last part of the last arc was by Danijel Zezelj, if there is a holy grail of current artists who I would like to own a page of art from it is Zezelj. He has done a ton of great work in Loveless, Northlanders, Scalped, Luna Park and many other books. His work has a heavy line and an almost etched feeling to it that no one else in the business has ever tried or achieved to my knowledge. 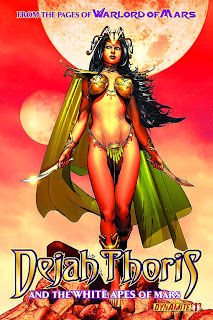 On a different note I picked up Dejah Thoris and The White Apes of Mars #1. Now that I have read about the lawsuits I have mixed feeling about all of the John Carter books, but they are a guilty pleasure. The story and art tell the story, but the story is a little on the lame side as we have Dejah apparently now part of the Housewives of Helium show. The art is better then I can draw, as I cannot draw at all, but it is nothing that will have DC or Marvel knocking down this guy’s door. Of course it is strong enough to tell the story and I could see a strong inker making this book look a lot better. Still Mark Rahner as writer and Lui Antonio as the artist made the story fun enough that I want to see the rest of it. The covers of course are just an excuse for good girl art which is always welcome. 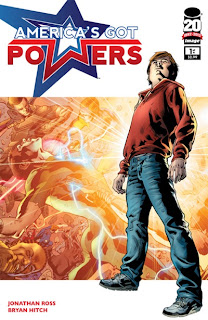 The final comic I will mention this week is America’s Got Powers #1 by scripter and co-plotter Jonathan Ross, co-plotter and art Bryan Hitch, inks Andrew Currie and Paul Neary with colors by Paul Mounts. The weakest name in the entire bunch is Jonathan Ross from a comic book world perspective. The British broadcaster, Talk Show Host and comedian left the BBC in 2010 and has drifted into the comics world with the over written Turf by him and Tommy Lee Edwards. Since I no longer watch American Idol or its endless derivatives, the premise of the book felt lame. What made me buy the book was Bryan Hitch, who to me is this generation’s Neal Adams and the Image label told me that it might be a fresh take on tired concepts. The first issue delivered all that I hoped for and more. Dynamic art, an interesting story, a cliff hanger that makes me want to come back for more and over 30 pages of story and art for just $2.99. The premise is an event occurred 17 years ago and within the San Francisco area every woman immediately delivered their child (no matter how pregnant) and they are had powers. The tournament was a cover to try and keep the kids, who are now teens in check and other covert things are going on. The end is the one kid without powers ends up being perhaps the most powerful of them all and his use of powers is the same energy signature as the initial event. This kid having the most power was telegraphed a mile away, but the story still worked and I’m coming back for issue #2.
I now want to add some commentary on the second half of my title about the digital revolution. I think it is finally coming. Instead of repeating what is going on click here to see a good summation.  I still rather read my comics as printed matter, but I now do most of my book reading with a kindle, all of my music is digital, much of what I watch on TV is off a digital medium (even if just recorded via a DVR player) and now comics are pushing towards that format. More and more material is going digital only or digital first, more and more combo packs or free digital comics are part of the deal with Marvel and DC. DC is moving their action figures to an online store with collectables only available from them. Amazon and Tales of Wonder can undercut even the most generous discount from your comic book store on hard cover collections. Ipad and other tablet computers have come down in price as to make buying one more and more of an option for most people. Oddly I have read at the same time there was a very, very small up tick in the number of new stores. Of course many comic stores also play heavily into the gamer market place as well. That up tick is a hiccup in a negative trend. Once the digital market starts to see how easy it would be to produce an enhanced comic book with simple things as color on or color off features and an audio portion to have the comic come to life a little more I think the change over will be complete. As long as the publishing side makes a buck or two or at least underwrites production cost, we will have printed books. Heck vinyl records are still being made just at a higher price point and books are still published, just not in the same numbers. Of course there are less and less book stores and store fronts that sell vinyl records, so while the printed comic will probably last for a lot more years, not sure how many stories survive.
One last comment before next week’s list of what I’m getting, Lee and I have been talking back and forth about lack of comments on this blog. Lee says no one comments unless we say something totally offensive or its like. The reason why I always want more commentary is just to generate conversations about what we love. Still I know a column on the Trayvon Martin and George Zimmerman fiasco would generate comments, I will stick with comics. For the record my thought was Zimmerman should have been charged from the jump and let the court decide guilt or innocence based on the law.
Next week’s list is Manhattan Projects, Walking Dead, BPRD, Ragemoor, Next Men, Rachel Rising (great series), The Shadow (By Garth Ennis, should be interesting), Avengers. AvX (the spin off series), Incredible Hulk (last issue for me), Punisher, Thunderbolts (love this arc), Uncanny X-Force, Wolverine and the X-Men, Batman (the best DCU cape book), Birds of Prey, Catwoman (target to be dropped), DCU Presents, Voodoo Child (first issue was weak, one or two more chances to captivate me), Fables, Girl with the Dragon Tattoo (read the books, saw the movie, now to read the comic), GL Corps, Hellblazer, Justice League, Nightwing, Supergirl, and Wonder Woman (love this take on WW).
Remember next week is an interview post and I’ll have a regular column in two weeks. Thanks for reading,
Jim
Posted by Jim at Monday, April 16, 2012