Indies Previews For June Part 2 of 3 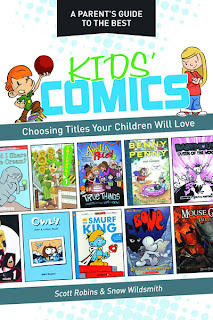 Parents Guide to Best Kids Comics: Choosing Titles Children Love SC by (W) Scott Robins
Experts showcase in great detail 100 of the best comics currently available for young readers and identifies what attracts and entertains kids, all while creating a suggested reading list of hundreds of other outstanding titles. The reading level guide, clear comments, and accompanying comic samples guide users to the best choices for every child. Each entry includes key reading appeal points and associated genres, creating a recommended balance of reading for education and reading for recreation. $16.99
Lee: I periodically get questions about what books are good for kids so I think this is awesome! If the books shown on the cover are any indication the author has a really good handle on what is/ is not good for kids.
Gwen:It is nice to have someone else compile a list of kid friendly comic books. Not that I don't have a pretty solid list myself these days (after having bought comics for a lot of my friend's kids) but it's nice to see some stuff I wasn't previously familiar with.

And 7 more below the break 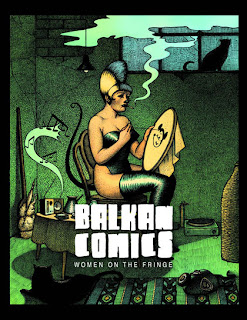 Mark Batty Publisher
Balkan Comics: Women on the Fringe HC by (W/A) Helena Klakocar Vuksic, Nina Bunjevac, various
Gathering together the work of close to twenty contemporary Balkan women, Balkan Comics: Women on the Fringe introduces the English-speaking world to some of the world's finest, and least known, comics artists. Featured artists include Helena Klakocar Vuksic, whom Marjane Satrapi cited as an influence in the creation of Persepolis; Nina Bunjevac, who has a cult following in Canada and the United States; and Irena Jukic Pranjic, whose comics and animated features and have multiple awards in Croatia and Europe. They, and the rest of the women in this book, create sparsely executed, edgy work unflinchingly depicts what it is to live as a woman in the Balkans now. 240 pgs $50.00
Lee: And the first real, hard-decision book of the month. I am sure this will be filled with beautiful art. At the same time, if it’s all about women’s lives in the Balkan states I am confident it will be depressing. Maybe not, it could have a couple of heartwarming uplifting stories. I want this soooo bad but I am not sure I am ready for the reality it surely depicts.
Gwen:This cover is creeping me out. I'd have to find out some more about the book because it could be very good... but $50 is pricey. 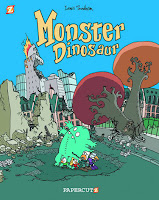 Papercutz
Monster Dinosaur HC by (W/A/C) Lewis Trondheim
A competition of dinosaurs is organized in town, pitting dino versus dino to see who the most ferocious beast is. Peter and Jean draw a monster dinosaur to enter in the competition, and bring it to life using their magic paper. Meanwhile, their dad does the very same thing! When both monsters are entered into the competition, whose creation will reign supreme? $9.99
Lee: Trondheim is a comic master and this is one great series. I purchased the previous volume and the kids destroyed it they loved it so much. But that’s a good sign so I will be getting this. Awesome stuff for readers of all ages.
Gwen: I'm pretty sure my paper dinosaur would beat out anything my Dad made. Regardless I love dinosaur comic books. Despite having never fallen in love with dinosaurs as a kid I really like to see them in comics for some reason. 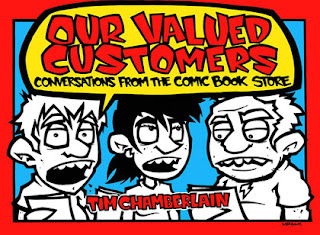 Plume Books
Our Valued Customers: Conversations from a Comic Book Store SC by (W/A/C) Tim Chamberlain
Illustrator Tim Chamberlain is the Jane Goodall of the comic book world. His blog, which provides the basis for this illustrated collection, chronicles the lively overheard opinions and comments of the sometimes scary, sometimes funny, but always fascinating culture known as the comic book store. Gathered from his time as both an employee and customer, each illustration provides a fascinating - and often hilarious - glimpse into the inner world of the devoted comic book fan. $11.00 Read samples at the blog here.
Lee: These are soooo good and soooo bad at the same time. They are so good because they are so funny and true. They are so bad because it’s give collectors such a bad name…. apparently deservedly so. But it is really funny.
Gwen: I'll have to pass on this. I have been to the blog and I really didn't enjoy these. Although I can see how Lee would. 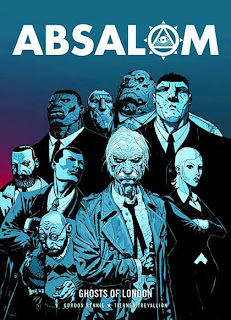 Rebellion / 2000AD
Absalom: Ghosts of London GN by (W) Gordon Rennie (A/C) Tiernan Trevallion
Veteran copper, Inspector Harry Absalom, heads a special squad that enforces the accord - a diplomatic treaty made in the 16th-century between the throne of England and Hell. If any demonic entities step out of line, Harry and his team will track the infernal offenders down and sort them out for good. But years of strife are starting to catch up with him, and now Harry also has to contend with the fact that he is dying of terminal cancer. $17.99 The intro 5 pg story can be read here.
Lee: Ooohhh this looks like fun. Lots and lots of fun. Trevallion’s art is new to me but it looks really interesting in the preview. Rennie is a long established 2000AD who got as many good stories as bad. But, this looks to be a fine version of Hellblazer and worth investigating.
Gwen: I'm not sure if I'd use fun as the classification here, but it does look interesting. Lee will have to let me know how it is.

Slaine: Treasures of Britain GN by (W) Pat Mills (A) Dermot Power
King Arthur has fallen in battle and a curse has caused darkness to fall upon his kingdom. In order to heal the land, Merlin and Morgaine le Fee need Slaine to retrieve the lost Treasures of Britain - magical artifacts also being sought out by the Saxon plunderer Hengwulf. These powerful items are defended by the demon-like Cyth who harvest human misery in order to revive their masters, the Dark Gods of Cythraw! $24.99
Lee: It seems that I have picked every Slaine book that been released lately. I always pick Ducks and I always pick Slaine. What can I say but these books are really really good. And violent. And good. And really over the top barbarian violent.
Gwen:I don't know if that cover is giving tribute to A Princess of Mars or ripping off Frank Frazetta. Hmm. 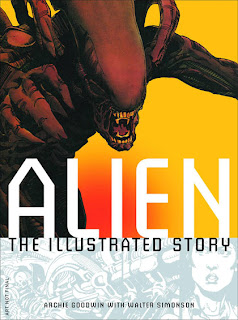 Titan Books
Alien: The Illustrated Story SC by (W) Archie Goodwin (A/C) Walter Simonson
By Archie Goodwin, Walt Simonson Two of comics' greatest talents-Walt Simonson and Archie Goodwin - joined forces to bring Ridley Scott's epic Alien motion picture to the comic book page. This brand new edition (released to coincide with Scott's latest sci fi epic Prometheus) has been meticulously restored from original artwork in Walt Simonson's studio. Includes scenes removed from the movie, directed by Ridley Scott. Carefully restored and remastered from the original artwork. 64 pgs, $14.95
Alien: The Illustrated Story HC (artist’s edition)
The limited run Artist's Edition presents the story for the very first time in a huge 14 x 17 hardcover. The Artist's Edition also includes never-before-published color try out pages, early sketches and Archie Goodwin's complete annotated script, and an interview with Walt Simonson, providing an in-depth view into the creation of a legendary comic. Signed by artist Walter Simonson 72 pgs $75
Lee: I love the artist edition books so I am getting the fancy hc. But, they aren't the best for reading so I’ll be getting the sc version too. Either book is going to be fantastic so I recommend getting the one you can afford.
Gwen:I really never understood the Alien hype. I mean sure, it was a good horror/sci-fi flick but then it spiraled until it merged with Alien vs Predator. Either way, I still like the movie but don't really need to read more in a comic book format. 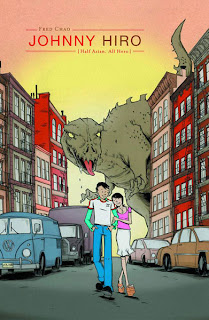 Tor Books
Johnny Hiro Vol. 01: Half Asian, All Hero GN by (W/A/C) Fred Chao
Johnny Hiro, a hardworking busboy, lives in Brooklyn with his flighty but lovable girlfriend Mayumi. Every day, he struggles to make ends meet while fighting giant monsters, running over rooftops from crazed waiters, fending off businessmen-turned samurai, or having the occasional conversation with Judge Judy, Coolio, or Alton Brown. With Fred Chao's signature style and laugh-out-loud humor, Johnny Hiro presents the quirky trials and misadventures of a modern-day hero trying to find his slice of the good life. $16.99 Read my long review here.
Lee: This is the same stuff as his book from Adhouse which was released a couple of years ago. Great stuff and well worth reading in case you missed it the first time. See my long review for details.
Gwen:This looks like a lot of fun. Entertaining concept and there's a dinosaur on the cover. I'm sold the same way Jim is when there's a monkey on the cover!