Lee: Image is getting harder to pick. They have a lot of great books out right now but a bunch of them are mid story. Lucky for me, a bunch are being released as trades so Image will be taking a lot of my money this month. Again.
Thomm: I’m in the midst of several of the books but haven’t gotten many trades recently. 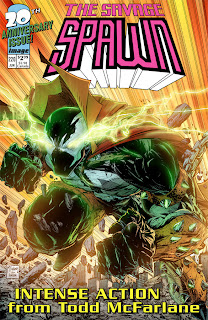 SPAWN #220
story Todd Mcfarlane art Szymon Kudranski
40 Pages / FC / $3.99
Todd Mcfarlane Returns To Spawn As Writer And Cover Artist!  Celebrate Spawn's 20th Anniversary with this special landmark release. Jim Downing has long been a man lost -- confused by his missing past, hounded at every turn and manipulated by forces beyond his control. No longer. With his past finally coming into focus and a full understanding of the man he once was just out of reach, Jim embraces the full might of his horrific hell-born powers to piece together a mystery that has ties to the very core of the Spawn universe. Old enemies will return. New dangers will emerge. And events woven within the complex fabric of Spawn's rich mythology will begin to coalesce. What happens from this point forward has been 20 YEARS IN THE MAKING!
Lee: I cannot believe Spawn has been around for 20 years. Incredible. But, I do find it highly amusing that my local store has loved the past year of the book because it was written by someone new. And that new person? None other than the Todd-man himself under an alias. Makes that first sentence about him returning as writer interesting indeed.
Thomm: I’ve never gotten into the character and only have a few things with it. It sounds like big doings if this is your thing, but I’ve got so much on the plate already I’ll not be adding this. 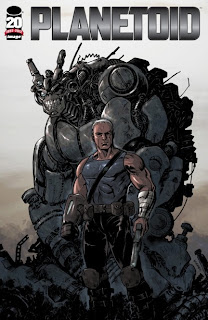 PLANETOID #1
story / art / cover Ken Garing
32 Pages / FC / $2.99
Silas, an ex-soldier turned space pirate, finds himself stranded on a mysterious planet in alien territory. As he explores the long-abandoned industrial ruins of the planet's surface he will have to fend off rogue mechanical creatures, roving cyborg militias, and a hostile alien military with a bounty on his head. Silas will have to rely on resourcefulness and bare-bones survival tactics in order to stay alive and ultimately unlock the secrets of a planet where survival is a luxury and escape an impossibility. Visit the author here.
Lee: The concept sounds kinda generic but Garing’s art looks great and Image’s latest batch of releases were great too so I am in. I don’t know what’s happened at Image in the past year but they are on a roll and I love it.
Thomm: They are on a good roll. I’ll wait to see how this gets reviewed before stepping in, though. It’s a bit generic in the solicit for me to take the leap. Sound like a video game more than a plotted story at this point. 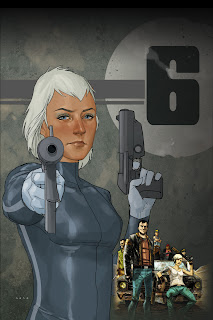 CREATOR OWNED HEROES#1
40 Pages / FC / $3.99
"American Muscle," Part One  by Steve Niles, Kevin Mellon
The world ended a long time ago. How it happened exactly and what exists in the wasteland have always been a mystery. Now Chloe, Gil and a gang of rebels have escaped the last human stronghold and are blazing across Post-Apocalypse America in search of paradise.
"Triggergirl 6," Part One  by Jimmy Palmiotti, Justin Gray, and Phil Noto
In this sci-fi thriller, the sixth in a series of genetically modified assassins born in a secret laboratory sets her sights on the ultimate target. But what happens when the perfect killing machine takes a personal interest in her target only to uncover a conspiracy that may change the fate of the entire human race?  Plus! An interview with Neil Gaiman! Triggergirl cosplay! Con photos! And original articles all celebrating the creator-owned spirit of independence!
Lee: So, this is 40 pages for $4 which is basically 2 comics for the price of one. I think this is a great idea. Yeah, it’s an anthology but the stories have got to be huge. This is another winner.
Thomm: A lower cost DHP sort of thing, right down to some of the same talent. That’s not a bad idea.
Lee: Ummmm, Cosplay and con photo’s???? I don’t think my line “No honey I’m reading it for the articles, not the pictures” is going to work anymore.
Thomm: Comics, Playboy… it’s all the same thing. 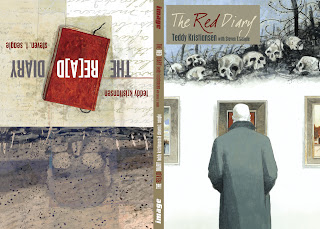 THE RED DIARY / THE RE[A]D DIARY FLIPBOOK HC
stories Teddy Kristiansen / Steven T. Seagle
art / covers Teddy Kristiansen
144 Pages / FC / $29.99
A Bold Experiment In The Graphic Novel!
Kristiansen's European Album is newly translated to English by Teddy Kristiansen and Steven T. Seagle. But in a unique flip-novel format, the book is also "re-mixed" with a completely different script devised by Seagle before he collaborated on the translation. Both versions -- The Red Diary -- a tale of art forgery and World War and The Re[a]d Diary -- a tale of identity theft and lost love - comprise this unique graphic novel from Seagle and Kristiansen -- the Eisner nominated/winning team behind the acclaimed Vertigo graphic novel it's a bird…
Lee: Wow, this is expensive for the page count. And, as much as I hate to say this, the words “unique graphic novel” make me hesitate. Maybe it’s the word ‘unique’ in combination with the words ‘bold experiment’ that are the real problem. When I think of the word ‘experiment’ I always seem to add “gone wrong” after it, sorta like Frankenstein.
Thomm: It’s like a more involved version of what Carey and Gross have done in Unwritten with a few issues. While that worked for the standard size issues there, getting into this length may translate into a long slog of trying to figure out what they’re doing with the format.

THE BULLETPROOF COFFIN: DISINTERRED #6 (of 6)
story David Hine
art / cover Shaky Kane
32 Pages / FC / $3.99
"Hole" Amelia is an overweight housebreaker in search of her lost daughter. Oswald Kiss tortures dolls in his basement. Henry likes insects. Deacon went into his bedroom eight years ago and never came out. Don't miss the hilarious climax to Season Two.
Lee: This is the last issue but I’ve read some positive buzz on the book. And, reading the setup, with the conclusion stated as “hilarious climax”, I’m not seeing the link. And, that makes me curious. I might have to pick this up as a trade when the time comes.
Thomm: Let me know how that works out. I’m less convinced.

PROPHET #26
story / art / cover Brandon Graham
32 Pages / FC / $2.99
Jaxson must find a way to warn John Prophet of the newly awakened Earth Empire.
Lee: I expected nothing from this and I was wrong. I’ve heard nothing but positive reviews. Add that to the fact that I love Graham’s stories and art and I’m gonna have to go back and find the last couple of issues.
Thomm: I still know nothing about this. The solicit’s not providing much and I obviously haven’t spent as much time looking for what others are saying about it.

Lee: This could be the year of Image Comics because they are really replacing DH as one of my favorite Indy publishers.
Thomm: Ha! And you gave me grief about taking Image out of the general Indy category and giving them they’re own preview.
Posted by Lee at Friday, April 20, 2012