The Shadow: Blood and Judgment

Lee's doing his utmost to remind me why my once fond memories of Howard Chaykin's work have receded so much. Sending me this four issue mini-series from 1986, I realize it's a good thing I hadn't read this before I read American Century, or I might never have read it.

As I recall, I read the ongoing series written by Andy Helfer and drawn by Bill Sienkiewicz in 1987-1989, but I never picked up this mini-series. I don't think Chaykin was on my radar at that point, and I wasn't keeping up with comics too much at the time due to being in college, but I'd guess I got the ongoing because of Sienkiewicz on the art. I was a big fan of his work on New Mutants back then.
While the ongoing series was set in the usual 1930s, Chaykin told his story in 1986, or thereabout. He crafted a rationale for Lamont Cranston still being alive, hale and hearty, by having The Shadow disappear more than 40 years prior. It's not a great rationale. The Shadow 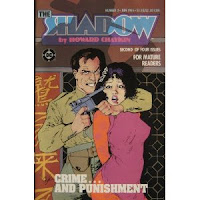 goes off into whatever mystical, mountainous land he was in when he first became The Shadow, where he doesn't age, but he does have a couple of sons, who are also adults now.
I don't really get the appeal of this land. It's supposed to be more advanced than the outside world, in technology and enlightenment. But the land Chaykin crafts seems to be populated mostly by cold blooded killers whose primary interest is keeping their technology from the outside world.

There's a whole back story with the actual Lamont Cranston, who's a low level scum who tosses his own girlfriend out of an airplane to save is ill gotten cargo. Naturally, this guy's still alive 40 years later, too, and trying to get back to the misty mountain hop to take all the technology.

There's also a story line involving The Shadow's girlfriend from the '30s and '40s, as well as his sidekick. Several of The Shadow's old associates have been killed. If memory serves, that's part of the scummy Lamont Cranston's plan to draw out The Shadow. No idea why The Shadow, with his mysoginistic and superior attitude would care much about these people he abandoned 40 years ago, but that's the raison d'etre.

The biggest problem with this book is that I cared not a whit about any of the characters. The most appealing was the one time sidekick, who at least kept alive the old Shadow mythos and shot his way out of trouble. The Shadow himself is a tool with no love for anyone, so far as I can see. His sons are just kind of there. There's no relationship between them, and I wouldn't have known they were his sons but for it being stated at some point. From the look of them their mothe

r was Asian, which is fitting considering that's the location of the mystery land, but I guess any relationship between The Shadow and the mother wasn't worth mentioning.
The Shadow's former girlfriend isn't very appealing, either. She's a once glamorous woman who seems washed up an beyond her prime. I don't much get her anger at The Shadow 40 years later. Is it worth holding onto for 40 years? No wonder she's not pleasant if she's been hanging onto that as the center of her existence all that time.

All in all, I didn't miss anything in not reading this 26 years ago. Just another nail in the coffin of my interest in Chaykin work.

If I stick to his series in Dark Horse Presents I'd be better off. That was pretty good.
Posted by Thomm at Tuesday, April 24, 2012