As promised we have the second part of 2 part, which is therefore the conclusion of the June DC Preview Review. 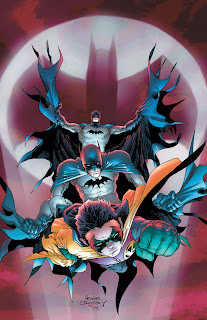 ABSOLUTE BATMAN AND ROBIN: BATMAN REBORN HC
GRANT MORRISON
Art by FRANK QUITELY, DAVID FINCH, PHILIP TAN, ANDY CLARKE, CAMERON STEWART, JONATHAN GLAPION, DUSTIN NGUYEN, RYAN WINN and SCOTT HANNA
Cover by FRANK QUITELYAdvance solicited • On sale NOVEMBER 21, 488 pg, FC, 8.25” x 12.5”, $99.99 US
• The entire run of BATMAN AND ROBIN by writer GRANT MORRISON is collected in an oversized, slipcased ABSOLUTE EDITION!
• The DYNAMIC DUO battle the CIRCUS OF STRANGE and investigate the abduction of a child by the mysterious DOMINO KILLER!
• With BRUCE WAYNE absent from GOTHAM CITY, the new Batman and Robin must deal with the deadly return of THE JOKER!
• Collects BATMAN AND ROBIN #1-16 and BATMAN: THE RETURN #1!

Jim: That sucking sound you here is me being drawn in for a high end hard cover. This was a fantastic run and now I regret that I purchased the deluxe hard covers. I know they are going up on E-Bay soon.
Gwen: Ah the continuation of the hardcover escalation game! 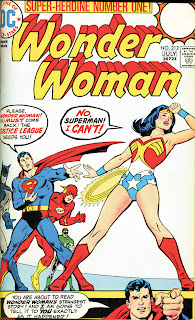 WONDER WOMAN: THE TWELVE LABORS TP
LEN WEIN, CARY BATES, ELIOT S. MAGGIN and MARTIN PASKO
Art by CURT SWAN, IRV NOVICK, DICK DILLIN, KURT SCHAFFENBERGER and others
Cover by BOB OKSNEROn sale JULY 4 • 232 pg, FC, $14.99 US
• Collects WONDER WOMAN #212-222.
• In these 1970s tales, Diana Prince is back as Wonder Woman – but she must prove her worthiness by undertaking twelve tasks – each monitored by one of her former Justice League teammates!

Jim: I’m very tempted to buy this as it brings Wonder Woman back as a super hero and somehow the seventies attempt of male writers trying to bring an element of feminism or something into this character is now very amusing. This is the follow up to the modern pantsuit wearing Wonder Woman. It is only $15 bucks, hmm….
Gwen: You might as well, you can pass it on to me and then Lee's girls. Also this is a kind of cool story idea tying in with her Greek myth type heritage. 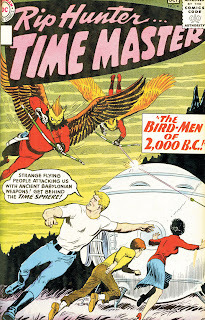 Jim: I have sworn off these collections because I never get around to reading them, but I really want this one. The art line up is pretty damn cool, Alex Toth, Joe Kubert and Nick Cardy among the mix. Damn I’m buying this and the Wonder Woman book, I’ll justify it later.
Gwen: You can only justify this one if you actually read it :P 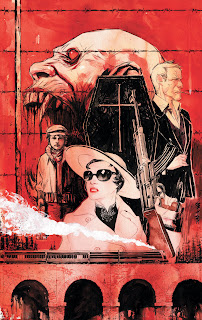 AMERICAN VAMPIRE: LORD OF NIGHTMARES #1
SCOTT SNYDER
Art and cover by DUSTIN NGUYEN
On sale JUNE 13 • 32 pg, FC, 1 of 5, $2.99 US • MATURE READERS
Hot on the heels of last year’s award-winning AMERICAN VAMPIRE miniseries, SURVIVAL OF THE FITTEST, we return to postwar Europe and the vampire-hunting agency known as The Vassals of the Morning Star! Agent Felicia Book has had a dark life, filled with tragedy, but she has finally found peace, raising her adoptive son, Gus. But when the Vassals return for help tracking the most powerful vampire of all time, she soon learns nothing can prepare her for the threat inside The Coffin...
A great companion to the ongoing series and a perfect jumping-on point, LORD OF NIGHTMARES features amazing art by Dustin Nguyen!

Jim: The whole Twilight thing and the Anne Rice stuff turned me off the Vampire bandwagon, but Scott Snyder made it work again. Another spin off series is fine by me. What I also like is that it appears Scott is not over reaching as he only is writing AV, Batman and Swamp Thing. I worry when top talents are offered too many books and there work suffers due to being stretched. If I was running DC I would want Scott to be a co-plotter with others and help guide other writers, but again don’t want to over work the guy.
Gwen: I really do enjoy the American Vampire stories. It's always good to find new angles on genres that seemed, at least to me, dried up. 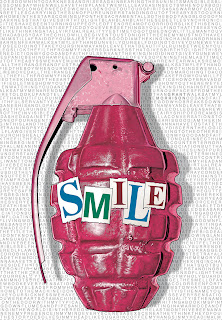 Jim: I was always curious to read the Invisibles, but DC’s pure quality is uncertain and a volume that is 1536 pages is not a book, but an unwieldy book case space waster. I will not be buying this book. $150 bucks and no idea of what type of crappy paper they will be using. Since I did not buy this book it makes sense to get the WW and Rip Hunter books.
Gwen: That is an insanely sized book. I could use if for weight training! However I'm not sure not buying something you don't really want justifies buying other stuff Jim! 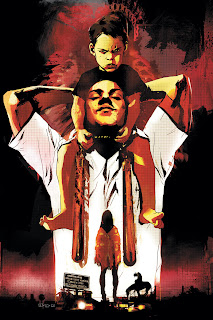 SCALPED #60
JASON AARON
Art by R.M. GUERA
Cover by JOCKOn sale JUNE 27 • 32 pg, FC, $2.99 US • MATURE READERS • FINAL ISSUE
IT ALL ENDS HERE.
Jim: I got the trades for Gwen and Jamie and Lee gets the single issues. I’m waiting for the hard cover collection that I hope is done right. This is a fantastic series and one that will go down as one of the great all time series of all times. I get the feeling no one gets out alive.
Gwen: Nice. Looking forward to the ending as this has been an excellent series.

Jim: So this was an easy month to pick and choose from and I have the Before Watchmen stuff to thank for this month. We will return next month and do it all over again.
Gwen: Well... I liked some stuff. I am more and more turned off the current cape material though.