Three Number Ones – Secret, Alabaster Wolves and The Secret Service

The Monday column was getting overly long so I decided to do a second post this week, as you may have noticed both Greg and Gwen has stopped doing columns for various reasons that we hope will end soon, leaving poor Lee to have to do more then normal. 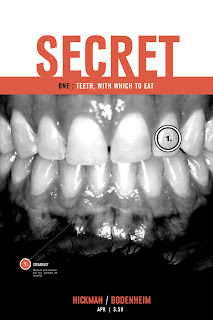 Secret #1 published by Image is by writer Jonathan Hickman and artist Ryan Bodeheim was a great start. I love Hickman’s ideas and often feel that the pure execution of the ideas often fall a little flat, are written 100% for the last page or are sometimes too long of a road to get to the point. It all doesn’t matter because Hickman has so many great ideas and fantastic (pun intended) plots that even a miss is better then some other books. Ryan’s art is better then his Red Wing work and his story telling ability was fantastic given that much of what had to be conveyed was without any sort of action shots. The story is just unfolding and is about a security firm that is playing some guy by first being the ones that attack him and then being the firm he hires to protect him. Part of the price for protection is open access to all of his business records which contain secrets for many important people. So much intrigue and suspense is already built up and we are also hip deep into developing a lot of the main characters. In 20 pages of story and art this series has already set up you up with the desire to find out just what the hell is going on. 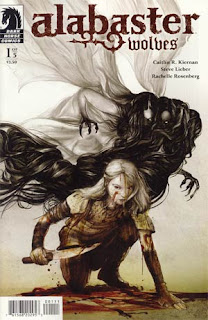 Alabaster Wolves #1 (of 5) from Dark Horse is an odd duck. I have no clue who writer Caitlin Kieran is but since I googled her I now know she is from Dublin, which means she Irish and being 50% Irish myself, she can’t be all bad.  The story itself is apparently about a character Dancy Flammarion from her novels. She is an almost self described Joan of Arc who is an albino monster hunter. The book feels like half fantasy, half horror and is not something that is 100% to my taste. Still I enjoy Steve Lieber’s art and his ability to make a narrative flow, so I found myself slowly getting into the story as it moved along. Dancy does not have her sword as she is at odds with her angel, but still fights and kills a werewolf while playing riddle games and doing a little lying. I’m not signing in this book for the long term, but it has me hooked enough to come back for issue #2. 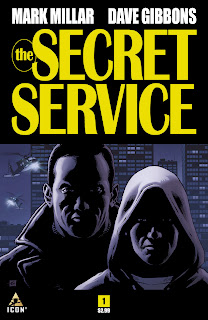 The last of the new #s1 is The Secret Service by writer Mark Millar and artist Dave Gibbons. Damn if Millar has not pulled me into his own little Millar world. The man has drawn together some great talents and I’m surprised he is still publishing under the Icon label. Although if you did not know Marvel published it, you would have no clue they are involved at all. After Super Crooks, I had no clue what to expect from Millar with a book by him and Dave Gibbons. Then I see Matthew Vaughn as another co-creator. This series was a lot of fun and appears to have a lot of heart. It begins with Mark Hamill being kidnapped, yes that Mark Hamill. The British Secret Service shows up to save him. The agent is doing his best James Bond killing the bad guys, has traps for them as they chase him and the now rescued Mark Hamill. The ski runner is going over the cliff to escape the skiing bad guys and the chute fails to open and the agent and Hamill are smashed into the ground many feet below dead as doornails. We switch to a low income family in England and a troubled youth getting caught stealing a car with friends. Next we meet his Uncle, who is, unbeknownst to his nephew, with the Secret Service. There is a lot more going on with the kidnappings of all the old science fiction franchises stars and more on the agent’s family, but what we are getting is half tongue in cheek and half a story that seems to have some heart to it. Dave Gibbons art is stellar as always and Millar’s scripting is reigned in a little.  I think that everything Millar does is done with an eye towards the movie, but as long as it is done well, who cares. Easily the best Millar series I have seen and as his books are slowly growing on me, so that is not faint praise.
The final word is that Image, Dark Horse and Icon are all producing some titles worth taking a chance on. All three are at least something different from the stale and standard fare that is the bulk of the big two’s output.
Posted by Jim at Tuesday, April 17, 2012