Here's an interesting thing. I've been sitting on reviewing Terry Moore's Echo for a few months now. At first it was that I had other things that needed to be addressed sooner, such as the Library books. I own the Echo books. No need to return them on deadline, or sign them out again. 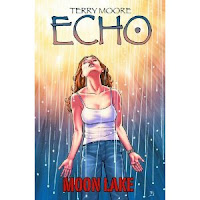 But here's the other thing. This is a great series. In fact, I enjoyed it so much, it's almost hard to write about it. How many superlatives can I toss around before the reader gets bored? How many before I get bored? The perils of being a critic, even an unpaid one.

But, put simply this is a great piece of science fiction. It's not great in the grand space opera scale of a Star Wars or Star Trek. It's great in the story of believable, relatable, even likeable characters who live in a world much like our own. In fact, it's science fiction elements are so well done a layman like me is hard pressed to say that it's suppositions aren't scientifically possible.

Not that all of it's aspects that aren't of our world are science fiction. The ongoing presence of Annie is more of a fantasy or theological element. Consciousness being nothing more than the firing of our neurons in our own particular brain structure, there's nothing I can think of that remotely supports a scientific explanation for the continuation of a consciousness in the remains of a metal suit, no matter how fantastic the properties of that metal. 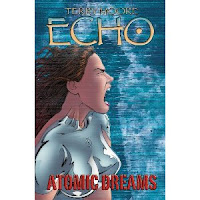 But how about I move on to the outline of the story? Yeah, that's a good idea.

Julie is an artist, just about to be divorced from a cop. She doesn't want to divorce, but her husband's adamant. She's pretty down and out, really. She lives alone with her dog in a cabin somewhere in the West of the US. She has a sister who lives in a full time care facility, as her sister has a tough time with reality since her children died.

Annie is a brilliant young scientist who works for HeNRI, a defense contractor. She's created an alloy that has unusual properties, allowing it to form a body molded suit that protects the wearer from a myriad of harms. Her boss, Foster, wants to take the alloy and make a bomb out of it before the Chinese do. Annie's concerned that trying do so may end the world. Foster has Annie killed by shooting her out of the sky with an air to air missile. At the time, Annie's wearing the suit and a jet pack, ostensibly testing the suit and unaware that she's a target.

Dillon is a park ranger and Annie's boyfriend.

Jack is the PR guy at HeNRI whose own boyfriend is tired of not having Jack's attention at home.

Cain is a homeless guy. Hard to say who or what he was prior to the action in the story.

Annie and Cain both happen to be at a place called Moon Lake when Annie is shot out of the sky in the vicinity. Pieces of the suit come raining down, mostly in the form of small ball like globules, rather similar to marbles. Some are larger, though. Some of it falls directly on Julie. Some falls on her truck. Some falls on Cain.

Moore does a slow build to reveal a lot of this. The big start is Annie being shot out of the sky, which is a great draw to start things. While Julie spends quite a bit of time trying to figure out what's happening with this strange metal that's steadily covering more of her body, Cain goes right into murderous rampage.

That brings in the other major player in the story, Ivy. Ivy is a tracker for hire. HeNRI hires her to locate Annie, not knowing about Cain's part in things. As a result, Ivy first thinks Annie is responsible for a murder Cain commits. 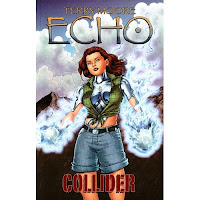 What starts as a straightforward hunt plot takes a number of turns. Annie's not exactly gone. Her body is gone, but her mind remains with the alloy that's attached to Julie. She wields some influence on Julie in that way, starting with some confused memories for Julie, considering they're not her own.

Julie ends up with Dillon and, with the help of a motorcycle gang with anti-military/industrial complex views, hide from both Ivy and Cain. It's not too long before Ivy figures out that Cain is the killer and that there's more going on than Jack told her when she was hired.

There's a lot of dying involved, none more tragically than Jack killing his boyfriend and a mutual friend when the boyfriend tries to leave their residence for good. Jack thinks that his boyfriend knew too much about the work at HeNRI, which is kind of ironic in that the boyfriend was leaving him because of his feeling that Jack wasn't sharing enough with him.

There's happy along the way, too, though. The suit can heal people, under the right circumstances, and Julie uses it to heal Ivy's daughter's deafness. Her daughter caught some disease, the name of which is escaping me at the moment, that caused deafness. That happened while Ivy was hunting for Ivy.

There's also some interesting sexual tension. There's a sort of menage a trois with Julie, Dillon and Annie. It's a little different, of course, because Annie has no body but the one she shares with Julie. Then there's the relationship between Julie and Ivy which has its own sexual currents. These relationships, among other things, help supply a lot of the humor that Moore

brings out, too. It's the sort of humor you get as people get to know one another and then become comfortable with one another. It's reason enough to read the series.

The chase eventually leads to Alaska and a hidden base where a super collider has been built to break down the alloy and allow the creation of a bomb. By this time the suit is covering Julie from head to toe and has altered her body so that she's bigger, built more like Annie. Suffice it to say that Dillon, Julie, Ivy and Annie save the world. You're missing out if you don't read the story to see how it gets there, though.

One interesting bit of knowledge, though entirely inconsequential to the story itself, came out of my reading. Going in I had figured this was an entirely new universe that Moore created just for this story. Turns out I was wrong. I've only read the first of the pocket editions of Strangers in Paradise, Moore's best known work, but a character from those stories was also in Echo. Strangers in Paradise, at least in the small part I've read, isn't the least bit science fiction. This is akin to setting Fringe in the same universe as Homicide, for those who like a TV reference. And yet, Moore pulls it off. There's nothing about the science fiction in Echo that is so out there or so improbably that it couldn't happen in Strangers in Paradise, though the latter closely resembles our own world. A very nifty thing showing some excellent writing skill. 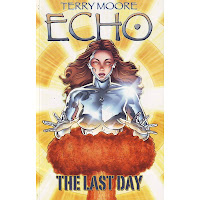 Then there's the art. Moore is unbeatable in his art, so far as I'm concerned. Sure, others are more striking in style, but no one captures the range of human body type and expression as well as Moore. His populace of humans is our populace of humans. It's even an important point in the story that Julie's body changes (as does Ivy's in a different way) in subtle ways that add up to some large scale changes. But it's there in the less important, too. Julie's sister is heavier, softer looking than Julie, which is only fitting for a woman who's institutionalized and not nearly so active as Julie. But Julie's sister isn't obese. She's just heavier than Julie. It's that sort thing that makes the reader feel like these characters are people and further draws the reader into the story as though they were people we all might know.

In all of this I only came across one error, and it's not Moore's error. It's a printing error. In the third trade, Desert Run, my copy has a misprint on the spine. Instead of Desert Run it says Atomic Dreams, which was the title of the second trade. If it were a coin, it'd make it valuable. Not that I'd sell it even if it was.
Posted by Thomm at Tuesday, April 10, 2012